“If at first you don’t succeed, try, try again,” is the saying being doggedly pursued by the Singh Hospitality Group at 2367 Hempstead Turnpike in East Meadow, where one of their nine Long Island restaurants is located. Its present incarnation, the Kansas City Smokehouse, is the fourth occupant and third barbecue eating place to give it a go here in the recent past. It follows limited, unsuccessful runs by Long Thin Seafood, Ruby’s and Rub barbecues. The last one, the Island franchise of a respected Manhattan restaurant, ended acrimoniously in court.

The new, darkish eatery with its 11 televisions (tuned to basketball and football during my visit), bare tables and floors, overhead fans, a long bar, booths and twenty beers on tap has the look and feel of a sports bar. The owners, the Singh Hospitality Group, had two pitmasters spend two months at Rub in Manhattan in training for the Island’s Rub branch. I’ve also been told they dispatched two of their people to Texas to sharpen their barbecue skills. And perhaps as a result, the Kansas City Smokehouse has its virtues. They include a powerful appetizer crock of Texas chili ($4.95) studded with chunks of burnt beef “endz,” a haystack of feathery fried onion strings ($5.95), smoky baked beans ($3.75), Fred Flintstone-sized Saint Louis ribs (half rack $17.95, full rack $23.95) full of flavor from six hours in a hickory wood-fired smoker, a basket of respectable deep-fried shrimp ($18.95) and a crunchy, blistered-crust apple crumb pie ($5.75). Add huge, take-home-sized portions (two side dishes are included in the price of entrées) and reasonable prices and you have the positives. 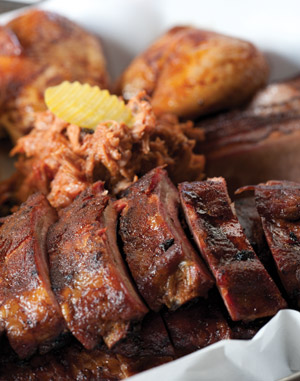 While it’s quite possible to pick enough of the good dishes to have a satisfying meal at the Kansas City Smokehouse, it’s difficult to overlook some of the flawed operational and training problems here. My visit was just days after the transition from Rub to Kansas City Smokehouse. The restaurant had only about 40 or 50 percent of its seats filled. Under these circumstances, it’s not unreasonable to expect it to be at the top of its game, trying to make a favorable impression on both newcomers and regular barbecue devotees. Yet, when we ordered the burnt “endz” we were told they were out of them. The same thing happened when we opted for the bread pudding. A diner who asked for assistance in choosing one of those twenty beers was told by our pleasant, hardworking waitress that she knew little or nothing about any of them. She was a competent sort who unfortunately hadn’t been trained or properly prepared to answer even frequently asked questions. Our bare table wasn’t dirty, but barbecues generate a good deal of grease and there was a thin film of it on the surface of the wood that a rag probably wouldn’t remove, but a thorough scrubbing would.

There are a number of rewarding desserts available, but when we asked which ones were housemade we were told “all of them.” One was a fried Twinkie, which made us suspicious about the origin of the rest as well.