Volatility and buzzwords permeate the Long Island restaurant scene. And both of them are alive and well at Legacy, the latest occupant of the standalone building at 95 East Main Street (25A) in Huntington. This spot has seen many a restaurant open and close (Italian, Asian and American among them). Typical was Legacy’s predecessor, Dao, an Asian entry that was still listed as a key newcomer in the Zagat Survey when it closed after a brief two-year run. Both Dao and Legacy describe themselves by the most magic of all buzzwords currently encountered on the Island: “Asian Fusion.” Neither is. They, along with most other similar establishments are Pan Asian restaurants or places that offer the dishes of various Far Eastern nations. But none of them are fused, combined or mixed with one another.

The attractive, striking Legacy is basically a Japanese restaurant with a sprinkle of Chinese, Thai, Indian, Korean and Vietnamese dishes, but their numbers are dwarfed by Legacy’s listings of sushi, sashimi, hibachi, maki and specialty rolls.

Legacy, which opened in mid-December, looks good and most of its food tastes good. Visually, little here has changed from its Dao days. The upfront bar and lounge, sushi bar, sparkling crystal chandeliers and white tablecloths remain while an eye-catching, flush-to-the-wall aquarium has been enhanced by the addition of remarkably exotic saltwater fish. But the ingredients in the artistically arranged presentations on interestingly shaped plates are superior to those used in the past. 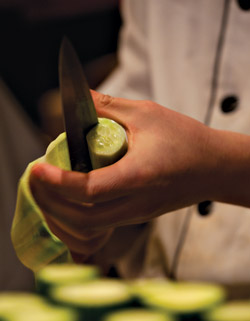 Appetizers batted three for four. Only a very modestly priced ($3) wonton soup that yielded very modest flavor and flat, medium-sized wontons (rather than the minis the menu promised) fell short. A substantial portion of soft, tasty boneless ribs ($7) were quickly devoured at our table, as were five crystal shrimp dumplings ($6) with admirably thin, transparent skins and fresh shrimp filling. Best of all was the row of California roll-shaped Thai crabcakes ($9) in a sweet, but not cloying fruit-laced honey sauce topped with delicate mango strands.

The only entrée misfire was the Hibachi scallop dinner ($20). The menu listed more than the kitchen delivered. There was no clear soup or green salad. Two shrimp, an abundance of noodles, mediocre fried rice and some overcooked scallops on a squished together combination plate did appear. But the sushi platter ($22), with eight pieces and a California roll was fresh and fine. The tender, bountiful half Peking roasted duck ($24) with mini steamed pancakes and heady hoisin dipping sauce was a triumph, and the Thai seafood combo ($21), a scramble of shrimp, scallops and vegetables in a smooth brown sauce is a dish I’d order again. Three pricey ($10) western-style desserts made elsewhere (lava cake, red velvet cake, caramel apple cheesecake) topped the usual Asian restaurant offerings. Service varies greatly depending on the waiter or waitress you draw. One night we had to request tea and chopsticks, experienced long gaps between courses and couldn’t find our waitress in time to order wine, while other tables experienced swift, efficient attention.