They’re like two opponents locked in a war of attrition. One side, which the crowd seems to favor, is lobbying to legalize mixed martial arts (MMA) events, such as the Ultimate Fighting Championship (UFC), in the state of New York. On the other stands a group of lawmakers and politicians in Albany who have argued against the sport’s authorization on the grounds that it’s flat-out barbaric.

East Meadow’s Matt Serra, a former UFC champion, is waiting patiently to fight in his home state. He’s puzzled why 45 states have legalized mixed martial arts while New York continues to pass on the idea.

“People flock to see these fights, specifically the UFC,” Serra said. “People spend money on hotels and restaurants, people are flying in from out of town. Why is New York not benefiting from it?”

The sport’s popularity is unquestionably building. In December, UFC 141 fetched close to 800,000 pay-per-view buys, only marginally behind premier boxing events and ahead of the 600,000 buys for the month’s biggest fight, a December 4 rematch between Antonio Margarito and Miguel Angel Cotto. Last March, West Virginia voted to sanction mixed martial arts events, leaving only New York, Connecticut and Vermont as the states with athletic commissions that have not ok’d the sport (Alaska and Wyoming do not have athletic commissions). Thus, next month’s light heavyweight title fight between two New Yorkers, Jon Jones and Rashad Evans, will be fought at UFC 145—in Atlanta.

Serra is one of a number of fighters to hail from Long Island, a list that includes Jay Hieron (Freeport), Luke Cummo (New Hyde Park) and Pete Sell (Westbury). Traffic to Serra’s Brazilian jiu-jitsu academies (SerraBJJ.com), located in Huntington and Levittown, has steadily grown over the past decade. It helps that Serra won The Ultimate Fighter 4, a televised MMA reality series, en route to capturing the UFC welterweight title at UFC 69 with a first-round technical knockout of heavy favorite Georges St-Pierre.

“People want to train because they see the effectiveness of the martial arts,” he said. “Kids want to do that when they grow up. They see that it works.”

Nevertheless, legislation was voted down in the State Senate in 2007 and the Assembly Committee on Tourism, Parks, Arts & Sports Development the following year. The bill, S1707, which proposes authorization of such events in New York, didn’t even make the Ways and Means Committee agenda in June 2011, the third straight year it was tabled. In February, the motion moved forward by passing in the Senate Committee for Cultural Affairs, Tourism, Parks and Recreation.

The state can hold boxing, kickboxing and jiu-jitsu events, but mixed martial arts, which combines all three skills and more, continues to be shut out. Bob Reilly, a New York State Assemblyman since 2004, is one of the state’s most staunch opponents of mixed martial arts legalization. He stood up in a committee meeting years ago to explain his vote against MMA and has been on the front lines of the debate ever since.

“What we in the Assembly are trying to do is to try to stop violence, especially among our youth,” Reilly said. “In the city of Albany, we have shootings every week. People being killed or shot on a regular basis, and there’s all sorts of bullying in schools that we’re trying to stop. There’s domestic violence in our society that we’re trying to stop. How can we stop this and then say it’s ok to put two men or women in a cage and let them beat each other unconscious? It makes no sense to me.” 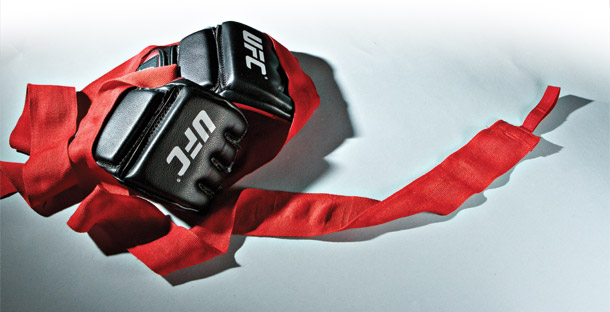 Concussion prevention and treatment has been a focus of sports organizations coast to coast of late, and for that reason and more, Reilly believes that even boxing, which is ingrained in American history, would have a difficult time getting authorized by the state. The National Football League has taken measures to protect players from helmet-to-helmet hits and implemented concussion testing that must be performed before a concussed player is allowed to re-enter play. Recently, Major League Soccer added a neuropsychologist to each of its teams to diagnose and treat concussions.

Reilly also cited the case of former Chicago Bears defensive back Dave Duerson, who committed suicide last February. Duerson suffered from blurred vision and slurring, and when he took his own life, he shot himself in the chest, not the head, and asked that his brain be used for research at the Center for the Study of Traumatic Encephalopathy. The center revealed three months later that Duerson had “moderately advanced” brain damage at the time of his death. He was 50 years old.

Is it comparing apples to apples or to oranges? Serra contends that football, considered by many to have overtaken baseball as the national pastime, is as violent, if not more so, than mixed martial arts. He readily admits that the early days of the UFC, which outlawed biting, eye gouging and little else, was “a freak show.” The current rules and regulations, however, are substantial.

“These guys aren’t barroom brawlers,” he said. “Everybody is well trained. I’ve been fighting since 2001 and I’ve never had more than a few stitches… We don’t run away from regulation; we run toward it. We work with the athletic commissions to make it a safe sport.”

Reilly scoffs at such a claim.

“How can anyone say these rules are safe or that this doesn’t do damage to these fighters?” Reilly said. “You’re literally knocking a guy down, dazing him, and then knocking him in the head 12 times.”

New York is viewed as the final piece to the puzzle for UFC. New York City is the media capital of the world, meaning it also might be the most important piece to the UFC empire. Its president, Dana White, has spoken openly about his eagerness to host a UFC event at Madison Square Garden. It won’t happen without state approval.

Serra hopes it happens sooner than later. He’s 37 years old and still under contract with UFC. The clock is ticking on his fighting career, and Serra would cherish the opportunity to compete in front of his home crowd.

Of how he thinks the populace would receive such an event, Serra could only say, “I think it would be wild.”

That’s what the dissenters say, too.