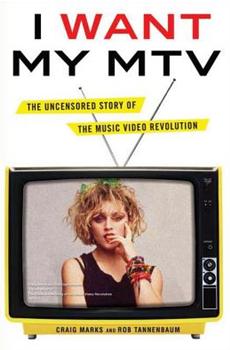 “Madonna came into our office on a skateboard, all sweaty and dirty.
I was like, ‘Shit, what’s with this girl?’ She went to see Bob Regehr–
a big product manager at Warner Bros.–and left a note on his bulletin
board that said, ‘Sorry I missed you, because I’m gonna be a star.'”

Anyone who grew up during the 80’s and 90’s MTV video era and wondered what went on behind the scenes will appreciate the amusing tome “I Want My MTV: The Uncensored Story of the Music Video Revolution.” Written by former music editors Craig Marks and Rob Tannenbaum, “I Want my MTV” is an oral history told by about 400 musicians, VJ’s, directors, and executives, reminding us of MTV’s place in pop culture.

From Guns N’ Roses’ rise to stardom to Sting’s big ego, the anecdotes in this book will captivate readers who remember looking forward to the world premiere of a new video. One music executive recalled viewers thinking Boy George was an “ugly” woman. A “shy,” control freak, Prince would whisper demands to his staff and the messages would eventually get passed down to the targeted actor or director on the set. The ever-competitive Madonna was not very happy when Sinead O’Connor’s video for “Nothing Compares 2 U” won Video of the Year over Madonna’s “Vogue” at the VMA’s:

“[Madonna] and Sandra Bernhard had been really nasty about me in magazine interviews, based on how I looked… I was very pleased to beat the shit out of her that night,” said O’Connor.

The ever-present power struggles aside, there was no denying the influence the visual MTV era had on culture– from fashion trends and hair styles to TV, film and even politics when Bill Clinton went on MTV to rock the youth vote in his favor.

“I Want My MTV: The Uncensored Story of the Music Video Revolution” is still available in hardcover and electronically.