Kerry Kearney knows that to play the blues, you gotta be the blues. So, at a key point in his 20-plus-year career, the Long Island slide guitar legend did what any self-respecting bluesman would do. He went South.
“We went down to play a Crossroads Festival in ’97,” Kearney recalled. “Going down there was like a surreal dream. We drove through the cotton fields on Highway 61. There were these little roadhouses, these juke joints, with hand-painted signs featuring the latest local guy, the hot guy in the area, it just becomes his joint. Unbelievable. We went to Robertsville, Mississippi, where Robert Johnson lived. And I remember getting out of the car…and I just put my hands in the dirt.”

Kearney will bring all of that good voodoo to the YMCA Boulton Center for the Performing Arts in Bay Shore this month. Kearney’s got a core band with a few guest stars floating in and out, each of them helping him to follow and channel the sound that has captivated him all of his life.

“I think it’s a calling,” Kearney said of his magical relationship with the blues and the variety of custom guitars he plays. “When I’m playing, I’m playing for my life. That’s how I feel every time. I love music, I love instruments. This is what I do.”

Kearney’s earliest musical memories involve his family, who opened the door to the world of psychedelic rock and blues early on.

“I had three brothers,” Kearney explained. “One was a doo-wop guy, one was a hippie and one was a folkie. So, I had all that great music around the house growing up. My brother played guitar. I remember going to the music store with him to get a red Fender Mustang. I remember smelling the case.”

“I was three or four and I remember seeing the Beatles on TV,” Kearney continued. “I didn’t know who Elvis was and I didn’t have anything to gauge it against. But I knew it was special. I remember seeing that and knowing that I wanted to play guitar.”

Kearney’s early fascination with the Beatles, the Stones, Cream and Jeff Beck sent him on the endless archaeological dig into the history of the blues that led him to the likes of Mississippi John Hurt, Reverend Gary Davis and Muddy Waters.

“I wanted to get the education that they had,” Kearney said of his early heroes. “Who were the influences on these guys? I figured, if I’m listening to those guys, I’m getting it second hand. I wanted to go to the source.” 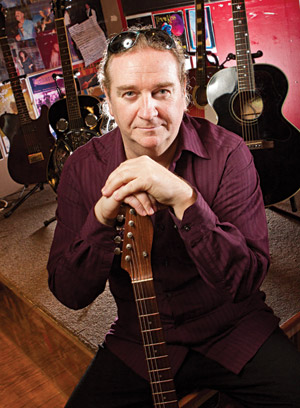 While he can play in all shades and sub-styles of the genre, from vintage ragtime shuffles to languid, hangdog ballads, Kearney is at his best when he’s shredding away in his signature style—a visceral brand of slide guitar madness that sounds like a train flying blissfully off the tracks.

“I find the best time to practice is late at night,” Kearney said of putting in the 10,000 hours that have made him the master of his craft. “I’m very content to just sit on the couch, watch TV and play scales.”

Kearney has shared the stage with many blues/rock greats including Robert Randolph, The Allman Brothers and Dickey Betts, and he’s played in major blues festivals all over the world, from Ireland to Memphis. But Kearney’s favorite experiences boil down to bringing his unique brand of “Psychedelta” to the home crowd.

“In a lot of ways, the blues is a bad word to a lot of younger people,” Kearney said. “They don’t know what it is. They have to realize that when they’re watching Warren Haynes or Derek Trucks, they’re watching the entire history of the blues. We try to take blues music and give a real beat to it. Get it to move. I think what we do is get people up and dancing. It’s not radio music, but it’s smoldering underneath. The local scene is actually very good. If you seek it out, it’s out there.”