On the surface, appreciating and protecting the environment is paramount in Barbara Roux’s photographs. Her exhibition, Barbara Roux: Environments at Hofstra University Museum’s Emily Lowe Gallery speaks to this. But looking deeper, the show, open through April 5, depicts one woman’s unique, magical, and, at times, even a bit mad world in the local forests and wetlands so often taken for granted. 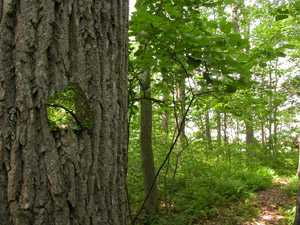 The majority of Roux’s images lack the aesthetic qualities typically seen by artists showing in museums. The photos are captured using a simple point-and-shoot camera, they are not slick and the artist’s approach is decidedly low-tech. A number of her pictures could easily be dismissed at first glance. Fortunately, the well-presented exhibition asks the viewer to contemplate what is in front of him, and soon Roux is leading him, hand in hand, down the rabbit hole.

“It’s all kind of a metaphor,” she said, describing her work, which often depicts fallen trees and branches like old bones in some hidden grave, or silhouettes of dark, twisting vines with the formal beauty of abstract lines. “They are spooky,” Roux said, acknowledging the sinister tone in many of her photographs. “I see things in the forest, or things happen that are unusual.”

Roux, a self-proclaimed recluse, spends hours “escaping the [din of] backpack leaf-blowers” and walking the woods around her home in Lloyd Neck, on the north shore of the Island. Her time exploring and the patience required for capturing certain images is part of her process and an important part of the work.

One of her most user-friendly images, because of how difficult it would be to recreate, is Roux’s 2011 photograph “Grackles Being Flushed Out.” It depicts five black birds flying out of dense foliage and into the blue sky. The birds are perfectly placed along the contour of the lush tree line and each has its wings positioned in a different stage of flight, much like the sequential animal locomotion photographs of Eadweard Muybridge. Roux waited hours to capture the shot. And she found herself in position to take it based on a gut feeling and a “convergence of coincidences,” almost as if nature responds to those who spend time communing with it.
Moments like these only bolster Roux’s connection to nature and her conservation efforts, and much of her work is clearly about man’s impact on the natural world. 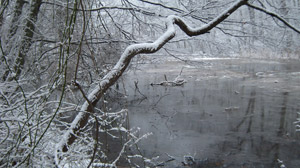 “Orchard Skirts,” one of her sculptural pieces, includes the pruned tops of four dwarf fruit trees arranged on a platform some six inches off the floor. Roux collected them after the orchard was demolished to make room for new construction. She flipped the pieces and reshaped the branches in order to create a new perspective and, it seems, to enhance the formal beauty of the objects. Each “skirt” resembles some sort of creeping spider or insect, or the 19th century hoop skirts for which the piece is named, but the branches also look as if they are cascading like icicles or water. And they cast dark and complicated shadows.

Like the DADA readymades of the early 20th century, changing the perspective on the branches and putting them in the museum context encourages the viewer to see them in a new light. What was ubiquitous before stepping into the exhibit is now beautiful, fragile and tragic. The small buds along the gnarled branches are particularly sad, each of them snuffed out with so much growing left to do.

As the show continues, it’s difficult not to begin anthropomorphizing the trees and plants in various states of death and decay. In the photograph “Tree Bones,” what was once simply a log lying in tall grass, becomes a murder victim, a used-up body cast aside at a remote dumpsite. The sprinkling of sawdust on the leafy forest floor in “Tree Dust” becomes an ominous clue remaining at a crime scene. The snow-covered branches sticking out of the water in “New Moon Snowfall in Cove” somehow feel and look like skeletal hands clawing at the surface. 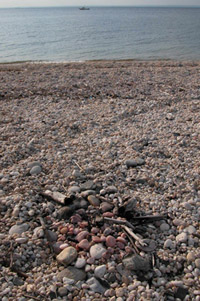 If Roux’s intention is to make the viewer feel something for the dead trees in her photographs, she has succeeded. And while her images are not created using the finest camera equipment, and most don’t feature perfect close ups of her subject, Roux’s choices are intentional. Full frame portraits of birds could be anywhere, she explained. “There’s no attention to habitat.”

The artist does not use any photo manipulation tools to enhance her images and instead creates certain surreal elements using only her ingenuity. Roux carries a house-shaped mirror on all her walks and it appears in a number of photographs, including two in the Hofstra show, “Imbedded Tree House” and “House in the Bottom.” Both pictures demonstrate how she, at times, can add her twist to the environments she finds. According to the accompanying description, the pieces capture a different perspective and each “reflects, literally, another area of the forest and the intrusion of man in the natural environment.”

The collection of twenty photographs, five sculptures, four poems and two pencil drawings ends with two photos, one hopeful and the other hammering home Roux’s message. “Milkweed in Morning Sea Breeze” is a close up—the flowering green plant, full of life and beauty with the bay behind it. Far off in the distance, a tiny boat, faded and blurred, is the only hint of man’s existence. To the photograph’s immediate right hangs “Fire Changes Pebbles Pink,” an image of rocks and broken driftwood on the same beach. In the foreground, a circle of wood signifies a long extinguished beach fire, and inside the circle where the fire once burned, all the rocks have turned pink.

Here, Roux gives proof that man can change anything, even the seemingly unalterable. In this photo, the boat is much closer, its presence difficult to ignore.