If you polled a group of rock critics to list the greatest albums ever made, the 1970 double LP Layla and Other Assorted Love Songs, the sole studio album by Derek and the Dominos, would easily be in the top 10, if not the top five. Masterminded by Eric Clapton (the only Brit in the group) and keyboardist Bobby Whitlock, the release features stunning contributions by the late, great Duane Allman and passionate musicianship by all involved. Of course, the song “Layla” is immortal, at the level of “Stairway to Heaven” and “Freebird”—works that defined the sound of the classic rock period.

Despite the album’s success, most of the members of the Dominos have not fared so well. Bassist Carl Radle died of a kidney infection in 1980. Jim Gordon, one of the greatest session drummers in music history, is incarcerated for murdering his mother during a schizophrenic episode. And Duane Allman died in a 1971 motorcycle accident. But Whitlock, who collaborated with Clapton on such Layla tunes as “I Looked Away,” “Keep On Growing,” “Anyday,” “Tell The Truth” and “Why Does Love Got To Be So Sad,” and penned the album’s closing track, “Thorn Tree In The Garden,” is still making great music.

Early in his music career, during the heady ‘60s, Whitlock was part of the Stax Records assemblage of musicians and was a member of Delaney & Bonnie’s band, appearing on George Harrison’s All Things Must Pass and Joe Cocker’s Mad Dogs & Englishmen. Today, Whitlock lives in Austin, Texas with his wife CoCo Carmel. They have collaborated on numerous albums and perform as a duo at their weekly Saxon Pub residency in Austin. Whitlock recently saw the publication of his book, Bobby Whitlock: A Rock ‘n’ Roll Autobiography (McFarland), a consistent seller since it was released in 2010. Marc Roberty helped Whitlock write the book and Eric Clapton wrote the foreword.

From his Austin studio, Whitlock spoke at length about his storied career. When asked about the song “Layla,” Whitlock, in his lilting, friendly, southern drawl, said, “It came from divine inspiration.” He talked about how some of the album’s best tracks were done live with no overdubs, such as “Have You Ever Loved a Woman” and “Key to the Highway.” He also said that all of Clapton and Allman’s guitar parts were recorded live. He remembered that for “Roll It Over” (a non-album b-side), Clapton wanted to “write a clean dirty song.” 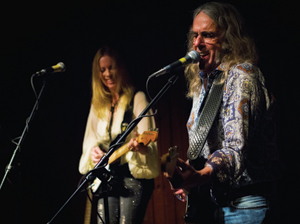 Whitlock spoke with great affection for Eric Clapton and not just about his music. “I learned how to dress from Eric Clapton and also from Hank Ballard,” he said. Whitlock fondly recalled jamming for hours with Clapton long before Derek and the Dominos ever took shape. He also talked about Clapton’s dedication to his music and how, even as famous as he is, Clapton always “tuned his own guitar and strung his own strings.” He also discussed Delaney Bramlett’s influence on Clapton at that time. “Eric didn’t want to sing like Delaney,” he remarked. “He wanted to sing from the same place that Delaney was singing from.”

As for “Nobody Knows You When You’re Down and Out,” a blues song that dates back to the ‘20s and has been covered by countless artists, Allman had been playing it live and brought it to the group’s attention to record. Among his many memories about the late rock legend, Whitlock noted that Allman taught him how to play bottleneck guitar. “Duane Allman was a fine man. He was an old soul in a young man’s body,” Whitlock said. Later, sharing his unique and surprising perspective on Derek and the Dominos, he said, “I like the live album even more than Layla.”

Being part of Delaney & Bonnie & Friends was Whitlock’s launching pad. He looks back on his time with the band as bittersweet. Whitlock said songs “just fell out” of Delaney, and he acknowledged that the group had a lot of problems. “They burned their candles at both ends and it went out real quick. There wasn’t even the wick left. No one was fired from the band, everyone left,” he recalled.

Whitlock worked on George Harrison’s All Things Must Pass album. In fact, the album is where the original four members of Derek and the Dominos came together, long before Duane Allman ever joined the band. Whitlock has fond memories of the session, particularly of Harrison. “He was a lovely man, a total gentleman,” he said. “He carried around a sense of well being and peace with him everywhere.”

Whitlock talked for hours about the people he worked with, including perhaps the greatest record producer of all time, Phil Spector, who produced All Things Must Pass, and Layla producer Tom Dowd, widely considered the greatest recording engineer of all time. Looking back at all the great sessions, tours and time spent with the cream of rock, pop, blues and r&b, he said, “I knew it was important to be in the room with those people. There wasn’t time to think about [it] because we were living it.”