It’s been reported that when she was 10, Björk Guðmundsdóttir would argue with the principal of the Reykjavik, Iceland, music school she attended. She was tired of “all this retro, constant Beethoven and Bach bollocks.” She’d show him. She would set up her own music school, with more playing and writing, less history and theory.

She did get a little sidetracked, though. A tough kid, at the age of 14 she formed an all-girl punk band called Spit and Snot. Later she was in Tappi Tíkerass (Cork the Bitch’s Ass) and eventually she got involved with an arts cooperative called Smekkleysa (Bad Taste).

But something must have mellowed, because from Bad Taste came the band The Sugarcubes, and finally solo albums and international stardom as Björk, the most famous Icelander since Erik the Red.

She was named Best Actress at the Cannes Film Festival in 2000 for her work in Lars von Trier’s Dancer in the Dark. For the Oscars that year, she strode the red carpet in a dress shaped like a swan, laying eggs as she went. As a mother, she’s fierce, once famously attacking a reporter in Thailand who supposedly was asking questions about her son, Sindri.

That was then. This is now. Björk is 46 and grown up. She once said, “40 would be when I’d kind of roll up my sleeves and do the real work.” She told another interviewer, “It isn’t until 40 that the serious shit really kicks in, and perhaps you’ll write your masterpiece at 55. You have to collect all these experiences to write about.”

Her mind has turned back to school. Last fall, she released Biophilia, which seems to be the world’s first app album. Besides the cd and videos, it is also an interactive set of apps for the iPad, iPhone and iPod Touch. You can play video games on the individual tracks and you can make your own music. And it’s educational in a big way. There are songs about DNA, viruses, electricity, crystals, plate tectonics, the moon, the solar system, the origins of the universe—the whole schmear.

Last month and at the beginning of this month, she brought Biophilia to New York with ten sold-out performances of the live show—five at the New York Hall of Science and five at Roseland Ballroom—and a three-week-long education series, in collaboration with the NY Hall of Science, involving 50 students from middle schools in Corona and Flushing. The kids used iPads to learn about music and science. It’s already been tried successfully in Reykjavik. The school system there has put it into the curriculum for the next three years.

Just listing all of the elements involved in the project is daunting: Björk had Andy Cavatorta, an MIT robotics expert, design a set of 10-foot-tall “gravity harps,” music-making pendulums; she had Icelandic and British craftsmen build a “gameleste,” a cross between a celeste and a gamelan that is played from a MIDI keyboard, and she used a “sharpsichord,” British artist Henry Dagg’s invention that involves pins revolving on a drum, like a gigantic music box. Finally, biomedical animator Drew Berry created a visual journey from the skin cells down to the molecular level of DNA.

The apps contain animations of the score. Musicologist Nicola Dibben wrote musical analyses of the songs. A lightning-crackling Tesla coil creates the sound for one song. In performance, the programmer-keyboardist Max Weisel uses a Reactable, a computer interface that creates musical sounds when the player moves blocks across its surface. The 24-voice Icelandic female vocal ensemble Graduale Nobili sings. To top it off, naturalist David Attenborough narrates the home page. 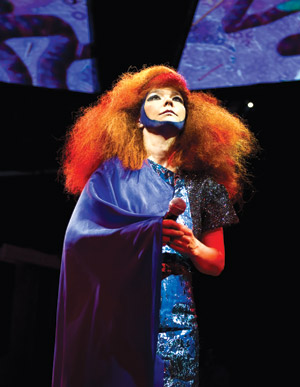 Björk’s original idea was to create a special “music house” that kids could wander through learning about making sounds. That morphed into a 3D movie with Oscar-winning filmmaker Michel Gondry. And that finally became Biophilia.

The live performance isn’t interactive (except to the extent that the audience howls, bops, shrieks and applauds). But it’s an experience nonetheless.

On February 3, opening night, a three-quarters-full moon shone down through the lobby skylights at the Hall of Science. A patient crowd made up mostly of people in their 20s and 30s, with a sprinkling of elders, first wandered through displays in the Hall of Science created to mesh with the themes of Biophilia. There was a cosmic ray detector to go with “Dark Matter.” Other displays showed how microbes can live in the most inhospitable places, how comets form and how life needs water to exist.

The museum’s Great Hall itself is not meant for music. Its undulating concrete walls, pierced with shards of colored glass in deep blues and crimsons, soar up to a ceiling that was almost invisible in the night. There was a small seating section, but most of the audience stood in a crowd five or six deep around the circular stage. Video screens suspended above the stage showed images from Biophilia. Four cameramen perched in cages suspended from girders above the crowd. Despite the acoustically unwelcoming space, the speaker system worked perfectly to create a full, rich sound.

Björk, who is famous for her eccentric fashions, wore a tight blue dress accented with what looked like inflated vinyl kidneys on her breasts and hips and a huge, rust-colored wig. The chorus wore gowns of shining gold and blue.

Finally, Attenborough’s calm voice filled the hall, beginning the narration: “We are on the brink of a revolution that will reunite humans with nature through new technological innovations. Until we get there, prepare, explore, Biophilia.”

The first song, “Thunderbolt” was dominated by the intense, ear-jarring crack and sizzle of the Tesla coil. Björk’s lyrics are their own mystic poetry: “All my body parts are one/as lightning hits my spine/sparkling,” with the driving refrain: “May I, can I or have I too often/craving miracles.”

Even while the visual accompaniment dealt with natural phenomena, Björk’s lyrics were rawly romantic. “Virus” portrays green viruses surrounding, penetrating and destroying a cell, while she sings, “Like a virus needs a body, as soft tissue feeds on blood, some day I’ll find you, the urge is here…”

Not the sweetest image of love.

Throughout, the women in the chorus moved about the stage, singing, cooing, dancing wildly, swaying gently.

The gravity harps, four steel cylinders mounted on a frame and striking tuned plectra as they moved, slowly swung the sparse melody of “Solstice,” a song about the solar system whose video shows the sun and orbiting planets.

In an esoteric project, one of the more esoteric numbers is “Mutual Core”—about geology. She sings about a couple who do not understand each other’s powerful love: “I shuffle around the tectonic plates in my chest… As fast as your fingernail grows, the Atlantic Ridge drifts…” As it happens, Iceland itself sits atop the [Mid-] Atlantic Ridge. The video showed the continents drifting apart and colliding, propelled by volcanic rifts.

Between songs, Björk said a quick, crisp “Thank you” in a girlish voice that does not match the power of her singing.

She performed a few songs that are not on the album, concluding with the anthem “Declare Independence,” while the video screens showed exploding volcanoes—another reminder of the simmering, explosive geology of her native island.

From a strictly aesthetic point of view, this is not Björk’s best work. The songs feel a bit rote. Perhaps all that creative effort spent on building the apps and putting together an educational program took energy away from the music. Though, what with the extremely odd rhythms and the heavy, ear-shattering freestyle percussion, it was certainly not “Beethoven and Bach bollocks.”

The live show was a most unusual experience. But it cannot replicate the apps, which are really hard to wrap your head around.

The “Virus” game shows a screen full of shimmering cells, all a healthy pink, with spherical nuclei in their centers. Björk, in the part of the virus, croons about how she will “knock on your skin and I am in.” Green and blue forms, looking like fat little stars, converge and surround the central cell. The player must keep knocking the viruses away. Meanwhile, mouths in the other viruses sing along. But here’s the irony: To complete the game, the viruses must win! They penetrate the cell, surround and digest the nucleus, destroy the cell walls, multiply and seek out more cells to conquer. That’s true love, baby!

There are other elements beside the game. In one you can watch the score slide by, complete with instrumentation and lyrics—but no singing. Another offers a cute animation of the music, with colored circles representing the various pitches. Finally, there are notes: Björk talks about how she was “fighting this candida issue in my throat” and “Obviously, you know this fungus is inside all of us and it’s never about eliminating it. You have to kind of just live with it.” Right. And then there is a detailed musical analysis by Dr. Nicole Dibben, about symbiosis and how the tinkly gameleste uses “an algorithm (a set of mathematical instructions) which operates on musical material put into the programme [sic] such that the compositional process takes on a life of its own.”

Note that this particular app does not include musical tools, though many of the others do. Oh, and the instrumentation on the score is different from that in the game and the song. Björk does things like that.

Whatever the schoolchildren in Queens and Reykjavik take from this experiment in education, Björk has given us an idea of how her music school would work. Sounds like fun—and work. And now that it’s available in cyberspace, she’s teaching from the largest classroom in the world.