Before meeting up with James Maddock for an interview/talk/share at Rockwood Music Hall on a gray afternoon in New York City’s epicurean Lower East Side, I click on a track by Wood, the band that almost made him a household name over a dozen years ago. Wood’s sound is ethereal and crisp, suggesting a late-’90s version of Van Morrison’s iconic Astral Weeks. The music is polished and well played, but the obvious heart of the matter is its singer. Younger James Maddock, whose voice nestles in that sublime region of nectar existing between the baritone and tenor ranges, is virile and fresh in Wood. His trademark rasp is in its early developmental stages. His melodic sensibility is evident in effortless movements and shifts. He’s already well versed in the choices a singer makes to produce the kind of beauty that wakes ears up, surely the product of years of performances in pubs and dives playing his own and other people’s songs. Maddock’s talent is as obvious as a British accent heard amidst the conversation at some random Midwest diner off the interstate in the middle of the night.

I’m not sure why I don’t expect the accent when he speaks. I have seen him perform before and know he’s from Leicester (pronounced “Lester,” he reminds me), England. Maybe it’s because his folksy version of rock and roll feels so American sometimes, so born of this country, that it surprises and almost tickles a bit to be reminded of its true origin. Leicester is a relatively small and “mostly rural” city 100 miles north of London, and the place where Maddock spent his formative years. Music was present in his family at an early age, so James was “seriously playing the guitar at age 13.” The allure of bigger cities followed not too long after.
A ridiculously simplified version of the trajectory of James Maddock’s career might go like this: 1) Very talented young rocker starts a band in London. 2) He moves to the States and gets signed (not necessarily in that order). 3) Something weird happens with the record label (“No hit single”/”Never saw myself defined by record deals or [traditional notions of] success”). 4) He finds new life doing it on his own and in his own way. A working definition of “new life” might include two really good records (Sunrise on Avenue C and Wake Up and Dream—both self-released), the adoration of the New York City and metropolitan area music community and a bevy of new friends and fans who completely and wholeheartedly support what he is making. Finally, the reasons why anyone should care about James Maddock, might read as follows:

REASON #1: Irony-Free Music
It’s hard not to like James Maddock. He’s a true American folk rock junkie. He speaks in an enchanted manner about Jackson Browne and Neil Young (Canadian, I know, but still in the North American canon), and loves Bruce Springsteen. His songs smell of “Thunder Road” and long drives to nowhere with the windows rolled down. Because I asked that he bring a guitar along (and because he so graciously obliged), he strums the chord formations to classic songs that inspired and influenced him, as well as some of his own that have recently moved me. Listening to James play “Knock It On The Head” (a Wood song) and bits and pieces of a few newer compositions, I can’t help but think how irony-free his work is—how sincere—and how this sincerity is a breath of fresh air in a contemporary rock climate ridden with smug irreverence. When he sings, “You were beautiful then, but you’re way more beautiful now,” in “Beautiful Now,” we feel like he means it. We believe him. I guess the world of the singer-songwriter has always been reserved for those who dwell in the waters of sentimentality. The best of the lot risk, but never actually get sentimental, and Maddock seems too playful and too mischievous to go that far. 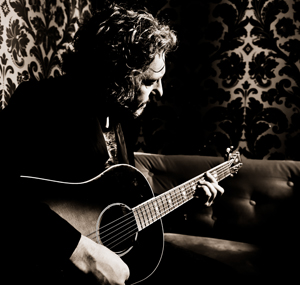 REASON #2: Craftsmanship
The buzzing presence of the ubiquitous “you” in James Maddock’s music may cause one to wonder for whom exactly is he writing these poignantly emotional ditties and ballads. For some interviews, I suppose, this question is standard mediocre fodder, but for Maddock it’s appropriate in the way that asking a poet about his muse is appropriate. “Don’t ever let the truth get in the way of a good story,” he tells me in response to my prompt about autobiographical writing. It’s a great response, really, not only because it’s clever, but also because it’s accurate in his work. There are three-dimensional versions of some of his characters out there in the world. We can be sure of that. But there is also a literary kind of wanderlust in his characterization. New settings are shaped. New nuances are presented in the way we understand the relationship. Sometimes fiction can be more accurate than reality. If this kind of craftsmanship seems like it may take a while, it does. “Sometimes it takes many years to complete a song,” Maddock says. “Sometimes a musical idea is sound-appropriate but not lyrically appropriate,” or vice versa. There’s the need to figure out the right way to place “syllables against notes,” as he explains it. The whole thing is not unlike a relationship, which makes perfect sense, because that’s what his compositions seem to be about: Relationships with others, relationships with the world and relationships with the self.

REASON #3: The English Factor
Maddock’s work has a cosmic dimension, I think, that separates him from other folksy American troubadours. His years near the English countryside and time spent listening deeply to John Martyn, Richard Thompson and Nick Drake records on overcast afternoons fashioned a profound longing in his voice, which can be quite infectious when paired with a raspy, Springsteen-esque howl. Thus, those who know James Maddock, love James Maddock. With a passion. And I believe it has a lot to do with an ineffable melancholy that pervades his work. It’s in the chord changes, in, as Leonard Cohen put it once, “the minor fall and the major lift.” It’s in the tension created by certain intervals between notes. It’s a nod toward the magical, the quizzical, the sublime. American folk has always been about the open road on a glorious sunny day, while English folk has been about the open window on a semi-clear night. The preoccupation with what’s above—the curiosity, the mystery of it —makes things wistful, more contemplative than the American concern for the moment. And while James Maddock seems more like the latter on paper, it’s his English roots that make him glow like an immaculate birth in the manger of contemporary music.

When I ask him what’s in store for the future, Maddock replies that he will “try to be good.” He tells me about an ongoing collaboration with Mike Scott of The Waterboys, upcoming tours and John Martyn’s Solid Air, which I later go purchase. What an amazing recommendation it is. “May You Never,” which James plays me before we leave, is a perfect gem of a song. It’s basically a prayer wishing the best but acknowledging that the haunting specter of the worst does indeed exist. It’s unapologetically sincere and true. I see the resemblance.

While I’m not sure what kind of past James Maddock carries with him (there is mention of a divorce in a recent interview, the aforementioned label deal and who knows what else that comes with trying to make meaning and a living solely as an artist in this world), I do know the present and the future look great. His band is stellar, his voice is in fine form and the material he’s releasing is turning heads. “When you walk in a straight line, things get out your way,” he wrote in a Wood song some time ago, and when I say goodbye to Maddock as we go separate ways on Houston, he toward his apartment near the Bowery and me toward Alphabet City, I think about how right he is.

James Maddock will perform at the University Café at Stony Brook on Sunday, March 11 at 2pm. Tickets available at shopsbu.com through March 7. For more on James Maddock, visit jamesmaddock.net.