“Forgive me father for I have sinned. It’s been two days since my last confession.”

“I seek redemption. I tailgated. I cursed at my mother. I stole cigarettes from my colleague’s desk.”

“Mmhmmm. Southwestern omelet? Ok. Do you want bacon or sausage with that?”

“Go with the bacon. Whole wheat?”

“Sit tight, honey, I’ll be back with the coffee in just a sec.”

Around me I could see the demons writhing above the booths. The spaces rank with the stench of titans. The optimism of children. The ambivalence of a divorcée. This place—outfitted in stale lights and individualized jukeboxes—is the ultimate suburban sanctuary. The great social leveler.

Disciples of all kinds congregate, changing in denomination with the waning of the daylight, they find their benedictions and spiritual resolve on the Formica tables and mirrored walls. In the morning, captains of industry make deals amidst truck drivers in plaid vests and suspenders. In the afternoon, the yuppie soccer moms complain about their gardeners, their husbands, their kids…everything. Early evening, retirees come in for Lenten dinner specials. At night, the youth who are either too young to find the wine or old enough to be sobering from it. They all bow to—

The unmistakable sound of the black gold pouring into the short white cup. Palms wrap around the warmth for comfort. Something familiar. Something simple. Something universalistic about the sugar dispensers, single-serving jam packets and the reliable waitresses donning black polyester vests, motherly hairdos and exotic manicures. There’s no hierarchy here. No fun-for-all pomp of table upon table of chic Long Island restaurant culture. This is the sanctity of the all-American diner, organized in anonymous, self-contained booths that elicit exorcisms and divine transformations. The past mingles freely with the present in this hallowed nave where the transactions of daily life compile to create a catechism of humanity. We are all equal in the unblinking eyes of neon.

My Naugahyde catharsis continues: “I fired someone I should not have. His hygiene was terrible. No one could stand it and the carefully placed notes weren’t working. I killed a man’s career because of deodorant.”

To my right, a man is preparing for his convocation. His tie is flung over the white shoulder of his button down. Initials at his sleeves punctuate the pages of testaments he is anxiously turning. He almost heard me, one eye glanced accusingly in my direction, but he is fixed on his own rites. He is parsing his worship among a Blackberry, his wallet, a watch and the six envelopes he is constantly arranging and rearranging in front of him. “My bosses,” the pagan shrugs at me and nervously throws his tie over his other shoulder in a flogging motion.

A few pews down, the nefarious ad man is cutting a deal. He called for this breakfast over a dinner to prove his busyness. He covets this new account—too long has it been with his competitor—he can do anything. He orders lasagna, just to prove his voracious point. His mark orders a tuna sandwich. A rumpled acquaintance bows in recognition on his way out, leaving the silent skip of a beat, the unspoken acknowledgement of his unemployment hanging in the air. “I heard he’s been drinking,” the mark says and hastily agrees to the ad man’s terms. The newly forged co-conspirators commit their canons to a paper placemat.

“Here you go, honey. Southwestern omelet with bacon and whole wheat.” She slides a bottle of Tabasco out of her apron with a wink, tempting me with an allegory that will play out in my stomach as perdition.

“When I’m gone, you’ll deny you met me. Everyone will forget I was here.” I broke the toast. “This is my bread, which I offer to you.”

“The Heinz is there on the table, honey.” She nods to the red bottle.

A legion of vapors collected over decades renders a film of grease on the window blinds. The ghosts of predawn breakfasts are trapped there, cackling at me. Hypnotized by their plotting voices, the cacophony of dishes crashing in buckets, a cash register unzipping its drawer and the unspecified bleating of NY cockney by waitresses, I open my throat to take the body of egg and grease… “Amen.”
I hear angels.

Behind me, a freshman is rehearsing for the interview of a lifetime. He is distracted by the couple to his left debating the merits of different waxing techniques. In the end, Brazilian wins and she agrees to it—if he first takes care of the unseemly patch between his shoulders. He says something about his wife. The freshman groans, excited by the Brazilian and adultery. The conversations ebb and flow, each piece coming together to create a grainy chorus of melodramatic gospels.

My temptress returns: “More coffee?” Her voice rings out from above the fray; she starts pouring before the question is full on her scarlet lips. The seven-headed beast beneath her is rhythmically swagging his tail, its ten horns catching light off the bejeweled hand offering the drink.

“Goddammit,” whispers the bald man in front of me. “You better find a way to get your hands on it,” he tells the man across his table, his neck turning from red to purple as he gestures his fork in the air.

The walls are moving around me, expanding and contracting accordion-style. The scene is turning into a funhouse mirror. “Yes, coffee!” I exclaim. “And French fries! With GRAVY! PLEASE!!” My stomach is on overtime, begging for comfort food, bubbling and gurgling like the lava of hell moving through my pipes. I forget absolution and steal the glass pot from Freda’s hands, gulping at the fluid of Styx as it overflows from my mouth, baptizing my face, shoulders and hands.

Peace overcomes me as the warmth envelopes. My fellow sinners look in my direction with suspicion. I fall back into my booth, exhausted. Complete, but empty. Purged. Christened. Freda draws a circle on the green lined pad and puts my check down on the table.

“No rush, hon. Just take that up to the register when you’re ready.” 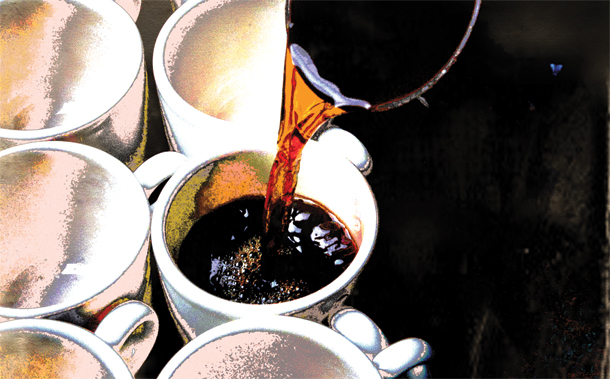