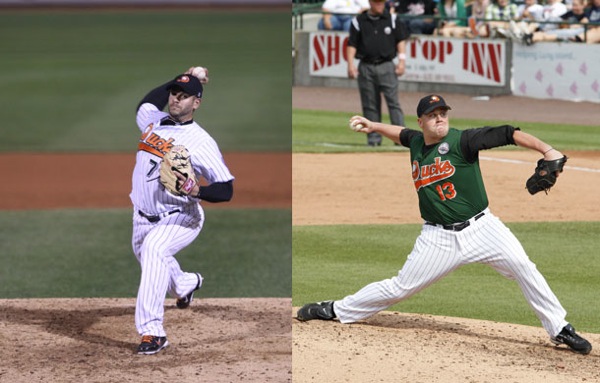 The Long Island Ducks announced this week the signings of pitchers Jason Monti and Joe Esposito, bringing their roster total to nine players. Monti returns for his second season with the Ducks and third in the Atlantic League while Esposito begins his second year on Long Island, according to a release from the team.

“Jason and Joe are two solid additions to our pitching staff,” said Ducks president/general manager Michael Pfaff, in a statement. “Both have had success with our ball club and in our league.”

Monti spent the 2011 season with the Ducks, pitching in 20 games. He compiled a 1-1 record with a 3.00 ERA in 20 games out of the bullpen, striking out 33 batters in 30 innings of work. The right-hander also posted a 1.91 ERA in three games during the postseason.

The 26-year old has five seasons of professional baseball experience. He reached the Single-A level with Auburn in the Toronto Blue Jays organization, posting a 4-1 record along with 2 saves during the 2008 season. A New York native, Monti was drafted by the Blue Jays in the 25th round of the 2007 MLB Draft.

Esposito was a member of the Flock during the 2010 campaign and posted a 3-4 record with a miniscule 2.98 ERA and 53 strikeouts in 48.1 innings over 25 games (four starts). His efforts earned him a contract with the Philadelphia Phillies organization, where he combined to go 2-2 with a 2.72 ERA in 14 games (five starts) with the Single-A Lakewood Blue Claws and Clearwater Threshers.

The Mineola native began last season with Clearwater, compiling a 2-2 record with a 3.55 ERA in 21 games (two starts) before being promoted to Double-A Reading. The 26-year-old spent three years in the Baltimore Orioles organization and has a 24-20 career record with a 3.40 ERA and 405 strikeouts in 375.1 innings. A graduate of NYIT, Esposito was signed by the Orioles as an undrafted free agent in 2007.