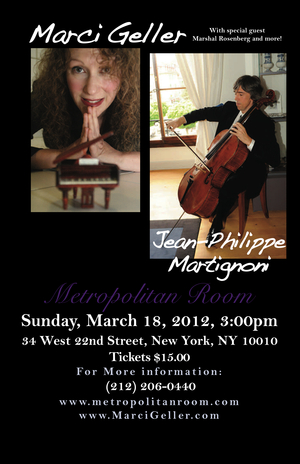 Folk songstress Marci Geller has collaborated with everyone from Vance Gilbert and Ritche Blackmore to Jonathan Preddice of Miles to Dayton, and her bandmates in the former trio Lucky 13. Now, the LI native will be collaborating with world renowned Parisian cellist, Jean-Phillipe Martignoni at the Metropolitan Room in Manhattan.

When performing at a wedding outside of Geneva where the famed cellist was a guest, Geller invited Martignoni to sit in on a couple of numbers and the “chemistry was immediate and magical.” Geller since invited him to perform on her upcoming CD, and they will be performing their first US concert together on Sunday.

“The musical style is interesting,” reveals Geller. “It’s very acoustic and live sounding and we’ve been very sensitive not to do any ‘enhancing,’ to just let the music breathe. Everything revolves around the storytelling– whether it’s a mother experiencing her first weekend alone after her kids leave for the first time, or the frustration of being stuck in traffic in Manhattan and all the feelings that evolve when you have that much time to yourself in a car.”

Once called the “female John Prine,” Geller is a skilled performer who mesmerizes her audiences with candid lyrics. On Sunday afternoon at 3pm, you will be treated to a show of Geller’s originals, with the dynamic Frenchman, who easily transitions from classical to contemporary, on cello, and the schooled Marshal Rosenberg on percussion. Those coming with a group can purchase VIP tickets which include private tables, open bar, appetizer, and gratuity. http://metropolitanroom.com/

For more info check out: www.MarciGeller.com