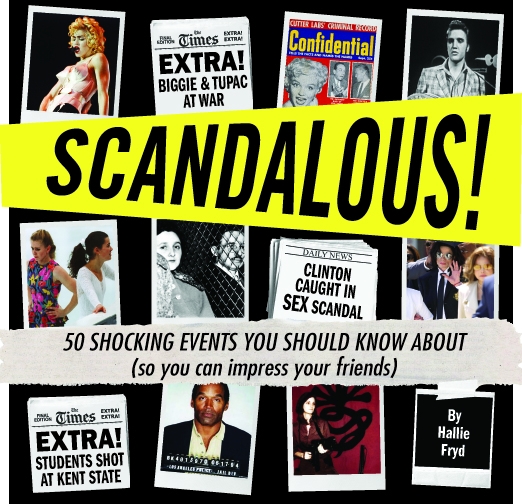 It’s true what they say: one thing leads to another.

The good news is, you’re not alone. Others have messed up big, the difference being that their errors made headlines. Read all about them in “Scandalous!” by Hallie Fryd.

For as long as people have walked the Earth, boneheaded actions have traveled right alongside them. Even our most distant ancestors had their OMG! moments because public embarrassment sure wasn’t invented in the last decade.

The thing is, we’ve come to love scandal. It’s deliciously entertaining to watch people behaving badly and we feel smug when they’re caught. Without it, what would we talk about? Without it, half the magazines in existence wouldn’t be around.

But, aside from the gleeful schadenfreude we get when disgrace hits someone who deserves a comeuppance, bad behavior is a good thing: it has a way of changing the world and the way we look at it.

Take Upton Sinclair, for instance. His investigation of Chicago slaughterhouses was a big scandal at the beginning of the last century. People were aghast at what he found, and the Food and Drug Administration was created in response.

If it wasn’t for the Quiz Show riggings, we wouldn’t have “game” shows. If not for “The Black Sox” scandal, Pete Rose would’ve been free to bet on baseball. Had Fatty Arbuckle not met Virginia Rappe, we might not have ratings for movies. Paternity cases would be different, if not for Charlie Chaplin’s gasp-worthy actions. No Elvis the Pelvis on TV, no rock & roll. Even gossip mags themselves sprang from the gossip mill.

We pay more attention to criminal proceedings because of scandal. We are more aware of government abuses, racism, and sexual harassment. It’s even taught us to spot cheating, hypocrisy, lies, and… more scandal.

Can’t get enough of the tabloids? Do you Tivo TMZ? Then absolutely don’t miss “Scandalous!” because it’s devilish enjoyment.

But don’t think for a minute that it’s fluffy. Author Hallie Fryd includes some serious information in this book. Sure, she dishes the dirt in detail, but she also makes the scandal relevant to today’s world by explaining “why we still care” and how it’s affected modern culture and politics. Then she goes even further in sidebars with related scandals from other times.

That, and the pictures make this a fun book to read. What makes it valuable, though, are the tidbits of history and some I-did-not-know-that factoids that will appeal to even the most celebrity-avoiding readers.

“Scandalous” is a great book for older teens, and adults will learn a lot from it, too. If you’re in need of a shockingly good read, this book will lead you right to it.