Up to and including the moment of its recent internal fracture, Sonic Youth has been widely regarded as one of the most influential bands in rock history. As the faces of the band, Thurston Moore and Kim Gordon essentially bridged the gap between punk and grunge with their seminal sound—a glorious, gravity-defiant mix of driving guitars, deep grooves and a relentless commitment to their “art as life/life as art” ethos.

Just beneath this incandescent surface, Sonic Youth co-founder, singer/guitarist, author, filmmaker and Oyster Bay native Lee Ranaldo has faithfully followed his muse for three decades. Ranaldo’s artistic experiments have pushed him way past the signature alt rock/noise aesthetic of Sonic Youth all the way into his current explorations with hanging guitars drenched in effects and improvisational multimedia soundscaping.

But Ranaldo’s best solo experiment is the one he’s just finished—a smart, elegant, powerful, straight-ahead rock record. Between The Times And The Tides is propulsive yet humble, ferocious yet subtle, concise yet ethereal, classic yet cutting edge. In scope and tone, it calls in both the classic songwriting vibe of Dylan and Crosby, Stills, Nash & Young, and the sparks and flames of Sonic Youth’s musical pyrotechnics. It’s so cohesive and singular in its effect, it could very well propel Ranaldo into an entirely new realm of popularity and interest—and it might save album rock in the process.

No one is more pleasantly surprised by this radiant, confident, newborn-flower smashing through the concrete than Ranaldo himself.

“I literally could not be happier with the way it came out,” Ranaldo said one recent Friday night over drinks in Tribeca. “I listen to it and I’m like, this is insane that I made this.”

Ranaldo had a few ideas floating around in his head for years, but he was simply too busy to fully develop them. In the spring of 2010, with Sonic Youth mellowing out, his schedule cleared just enough for him to pick up his acoustic guitar in earnest.

“I’ve been playing acoustic guitar longer than I’ve been playing electric,” Ranaldo continued. “And I always play acoustic at home. I’ve wanted to make a solo record for so long. A couple of times I tried to force it to happen, but it just never worked out for one reason or another. I didn’t really need to make one, I was happy with my place in the band. But Sonic Youth was taking it easy and one thing led to another.”

Soon, the rough edges on his sketches started to smooth and the loose ideas started to crystallize. Ranaldo recruited Sonic Youth anchor Steve Shelley to play drums, brought in his friend Irwin Menken to play bass and the trio effortlessly laid down an album’s worth of basic tracks.

“All of a sudden, I had a rock record on my hands,” Ranaldo laughed.

He passed the tapes around to some friends and ended up with contributions from improv-rock royalty, including SY veteran Jim O’Rourke, John Medeski, Alan Licht and Wilco’s Nels Cline.
“They all came in and did phenomenal stuff on the songs,” said Ranaldo. “I knew the songs were good right from the get-go. The hard part for me was the vocals. I was wondering, ‘Can I do this?’ The most beautiful part about this whole thing is that, from start to finish, it was completely unforced. It was just this huge, organic event. The songs started coming faster than I could finish them. And it hasn’t stopped.”

For all the instrumental beauty on the record, Ranaldo’s singing (rounded out beautifully with harmonies from Kathy Leisen and Ranaldo’s wife, Leah Singer) is indeed the true revelation. Now that he’s fronting his own band, Ranaldo has risen to this self-imposed challenge brilliantly. His voice carries wonderful new hues and inflections never before heard in Sonic Youth. His phrasing is warm, unabashedly melodic and downright intoxicating.

Between The Times And The Tides is an open discourse on the entire rock canon from The Who to Wilco and way beyond. In the Sonic Youth paradigm, Ranaldo’s songs are always the hidden gem, not unlike the sense of rarity we enjoy when George Harrison or Keith Richards steps to the fore. Ranaldo’s approach and execution evoke all of his myriad influences—while imitating none. 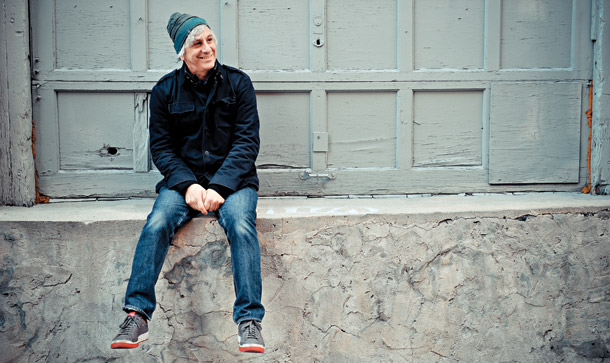 “One foot in the mainstream, one foot in the underground, which is where we’re happy to be,” Ranaldo said as he spoke of his and Sonic Youth’s unique and fortunate musical niche. “Our interest goes back and forth between both of those worlds. We’re total fans of pop and classic rock, and we’re also huge fans and lovers of the esoteric and the avant-garde. I guess ‘You can have it all’ is what Sonic Youth is trying to say.”

The Sonic Youth influence is palpable on Between The Times And The Tides, but it’s on the periphery. Ranaldo and his crack crew of “sonic” pranksters deftly find the smaller spaces in the songs to paint with a full palette of blips, squeaks, squawks and squeals. Where Sonic Youth can gleefully run amok in this department, Between The Times And The Tides picks its spots for weirdness with impeccable restraint. The ear is invited to bend and smile at Ranaldo’s experimental choices as they work solely to service the songs.

From the first notes, “Waiting On a Dream” pulls from the Sonic Youth playbook as it builds and explodes with Shelley’s sinewy, steady pulse, Menken’s driving bass and Ranaldo’s signature riffage. “Off The Wall” has an alt-pop sensibility with an infectious hook that reminds us Lee Ranaldo was Ryan Adams twenty years before Ryan Adams. “Xtina as I Knew Her” breathes with Ranaldo’s penchant for spooky chord structures and remote tunings. “Angles” is a punch in the face with a racecar tempo, sexy progressions and just a touch of dissonance that recalls balls-out Sonic Youth rockers like “Sunday” and “Sacred Trickster.” “Hammer Blows” is a true departure, hinting at the pristine melancholy of Stephen Stills’ solo work with warm fingerpicking and a soulful late night/early morning vocal. Ranaldo’s local nod is “Fire Island (Phases),” which thunders out of the gate with an “All Along the Watchtower”-esque stampede and then breaks into multifaceted themes. “Lost (Plane T Nice)” soars, peaks and then peaks again with wide open Townshend-infused jamming that touches the very tops of the Guitar God Mountains. “Stranded” is an open love letter in a rainbow-tinted glass bottle that might’ve fallen off Pet Sounds, and “Tomorrow Never Comes” is a smart nod to the Beatles in their psychedelic heyday—which is to say it’s a nod to psychedelia—period.

“Shouts” separates itself from the pack with its haunting relevance and, like Between The Times And The Tides as a whole, it emerges, quite literally, as a statement of fear and hope that speaks to the Occupy movement—which Ranaldo extensively observed and documented firsthand as a resident of lower Manhattan.

“We live really close to Zuccotti Park, and I spent a lot of time down there, blogging about it, taking pictures and posting stuff on my website,” Ranaldo explains. “It’s a fire that’s catching all over the world. It’s absolutely nuts. It’s a rising up of a bunch of underground sensibilities that have been dormant for a long time. In a lot of ways our country has gone to shit. All across the board, all kinds of disenfranchised people are getting together. It doesn’t have to be immediately politicized. It’s just a large group of people that are unhappy. There’s a lot wrong and they want it on the table. The system is so entrenched and it’s unbelievably broken. It’s hard to know the answer. I just identified with the spirit of what’s going on down here.”

Thanks to his relentless optimism, the dangerous push and pull that defines our current national struggle spills over into creative waters for Ranaldo. The steady undulation, the ebb and flow of creative and personal exploration, literally “between The Times And The Tides,” is the golden thread that runs through all of Ranaldo’s life and work. He’s an artist lost at home, coolly and sagely cultivating the balance between the familiar and the strange, joyfully allowing, even encouraging, the Kerouacian and Godardian blurring of the two. In all, Ranaldo trusts—and even more significantly—he believes.

“My general attitude has always been to try and stay as positive as possible and look ahead,” Ranaldo mused. “You do what you feel you’re convicted towards and you let the chips fall where they may. You drop a stone in a pond and those ripples go out. If it’s really true, they affect other people. You’re just doing a small action, but your repercussions can be great if you do it true enough.”

Lee Ranaldo’s new LP, Between The Times And The Tides, is available now through Amazon and iTunes. A vinyl pressing is available only through matadorrecords.com. While the future of Sonic Youth is unclear, they will continue to actively release archived material. Lee and his band play Webster Hall in NYC on May 11. For more of Lee’s music, writings and film work, visit LeeRanaldo.com.