During a recent local gig, Ryan Cassata laughed in response to the sound system cutting out mid-song, diffusing a potentially disruptive hiccup, and amping up an already teeming communal vibe. The inclination to be emotionally transparent and to harness the power of the moment is emblematic of the way he has managed to achieve national recognition as both an in-your-face rocker and vocal champion for the transgender community. The often profound and painful road that Ryan has traveled as an FTM (female to male) transgender individual appears to have grounded him. There is none of the adolescent bluster that surrounds most teens, obscuring or deflecting attention from what makes him “different.” He continues to allow his audience to see more of who he really is, even as his stage and megaphone grow larger. A strong belief in fate and a natural sense of rebellion have served Ryan well, but have offered only partial protection from the scrutiny cast upon those trying to break down doors in public.

“I always knew I was a boy…I had no words for it, but I had a sense of feeling masculine,” is how the lifelong Bay Shore resident described his bedrock sense of self. Unlike most six-year-old girls fixated on Barbie, fairytales and dresses, at that tender age, Ryan started wearing a baseball hat backwards and playing guitar. Guns N’ Roses and Led Zeppelin were the first bands Ryan claimed as his own. Incorporating their combustible guitar licks into his own musical vocabulary, the precocious rocker later absorbed the psychedelic introspection of Jim Morrison. Over the next several years, Ryan would add piano and songwriting to his musical arsenal, while striking out at suffocating societal norms.

Ryan recalls feeling pressured to conform despite his belief in destiny. The internal and external pressures of early adolescence briefly challenged his sense of self. He had no role models or guidance to help clarify his most basic assumptions about himself. Trying to grapple with the very specific expectations of family, friends and everyone else was a daily struggle. “I tried to dress more feminine in sixth grade, but felt uncomfortable… If I dressed the way I wanted, I was often mistaken for a boy,” he said. One traumatic memory was formed when he was forced to wear a frilly dress to a National Honor Society awards ceremony in seventh grade. “It all made me depressed and sad… It made me feel too different.” Soon enough, the impulse to be honest with himself and those around him quickly won out. He took a leap of faith and shared some of his experiences and thoughts with his school counselors. While the support of the counselors proved invaluable to Ryan, the moment that would crystallize his understanding of both his past and his future was about to take place.

At age 13, Ryan met a transgender individual and the path toward his own unimaginable liberation appeared. “It was the first time I had a name for my experience,” he said. His mother became his cherished confidant. In an act of love, she wrote an article about having a transgender child for momlogic.com. The media noticed and at age 15, Ryan appeared on such shows as Larry King Live and The Tyra Banks Show. “I just wanted to help out other kids and parents… I wasn’t looking to be famous, but to just do something good for society.” 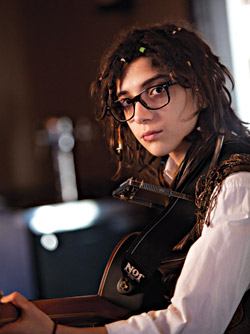 Ryan, who was already gigging and posting searingly confessional songs on YouTube, also became increasingly vocal in school regarding his personal battles. The national exposure further solidified the dovetailing of his music and advocacy. He had a keen sense that people were reaching out to him in a sincere way, but a tiny minority seemed hooked on reflected glory. High school classmates confided in him about being transgender, his music videos got exponentially more hits, strangers in other states shared gut-wrenching stories. And he decided to have “top surgery.” Although Ryan required an extended period of time to mentally prepare for the surgery, the decision itself was a milestone that added to his steadily growing determination. “The only reason I wanted the surgery was to please myself. It had nothing to do with the media,” he said.

In the two years between this decision and the actual surgery (Ryan had successful surgery three weeks after this interview), everything accelerated. He began posting spoken word videos that dealt with such core transgender issues as gender dysphoria (a strong negative association with the gender that one is assigned at birth), bullying and the astronomical suicide rate among society’s least understood demographic. At school, Ryan fought a prolonged and successful battle to have his current legal name, not his female birth name, appear in his yearbook. He used his “senior cut day” to educate ninth grade students regarding transgender issues. Ryan’s efforts resulted in his reception of the first Harvey Milk Memorial Award presented at Bay Shore High School. Speaking about the country’s most famous gay public official, San Francisco’s civil rights legend and fellow Bay Shore High School alum, Cassata said, “I feel very connected to Harvey Milk… I just want transgender students not to have to walk in fear.”

Bold actions create bold targets, and Ryan finds alienation is possible anywhere. He has even had to deal with blowback from within the transgender community. Some members have criticized him for not being “trans enough.” For instance, wearing his hair long and refusing testosterone have been described as heretical acts. Speaking pragmatically, Ryan said, “As long as you support transgender people…that is what I care about.”

With a growing backlog of acoustic demos and a song in the transgender-themed film Loop Planes stoking his musical fire, Ryan released two albums in 2011. Distraction was followed by The Theme of Humankind. There is an evolution toward a fuller band sound over the course of his initial two albums, yet they both connect with a bracing revolutionary slap that recalls Richie Havens’ “Freedom.” Ryan’s voice of righteous rage is usually out front, but his guitar dances close by, seamlessly shifting gears from a percolating motorcycle to a George Harrison-esque swoon. The music soberly rocks and then caresses the listener in a world that is all things Ryan Cassata. The track “Going West,” from The Theme of Humankind, inspired one fan to write him an email detailing how the song’s open exploration of top surgery “saved his life.”

To see Ryan perform live is to see a self-possessed artist inspired by a personal journey. At 18, Ryan has already played huge festivals and given scores of life-altering talks in schools throughout the nation. Over the next year, he will complete a new album, bring his role as fierce troubadour for the dispossessed on the road and give the keynote address at the Philadelphia Trans Health Conference, the largest transgender conference in the country. From there, his stage will likely continue to grow, and with it, his resolve.