Scheduled to move into its massive new Water Mill facility by next fall, the Parrish Art Museum continues to display impressive shows in what will soon be its “former” building in Southampton Village.

Two recent exhibitions, covering portraiture and still life, demonstrated an impressive breadth of work by revered and internationally-acclaimed local artists from the Parrish permanent collection—much of which will be displayed in the new facility—but the museum’s current effort takes a very different and surprising turn.

EST-3: Southern California in New York, on view through June 17, departs completely from the East End, Long Island and even New York. Instead, the exhibition presents 130 pieces by Southern California-based artists, in a wide variety of mediums, made between the late 1940s and late 1980s. While the show is an obvious nod to Pacific Standard Time: Art in LA 1945-80, a well-publicized, Getty Museum-sponsored series of exhibitions in Southern California—celebrating art in Southern California—it also tells the story of one collector’s vision. Every piece in the densely-packed Parrish exhibition is from the collection of one woman—Beth Rudin DeWoody.

Curated by David Pagel, LA-based critic and professor at Claremont Graduate University, EST-3, or Eastern Standard Time Minus Three, is a bold and exciting survey of art in one region over four decades. Comprising very famous and lesser-known artists from that time and place, the exhibition revels in the spirit of experimentation and freedom these creators shared, and unifies their work into a motley, disparate whole. 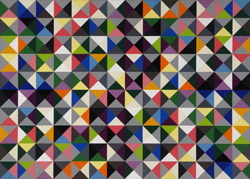 Pagel creates order by separating this argosy of work into three simple sections—People, Places and Things. Within these parameters, the viewer is able to better connect the artists, who clearly would not be confined by style or medium during this fertile window of time.

Starting with “People,” EST-3 puts visitors face to face with many of the artists represented in the collection. A wall of Don Bachardy’s pen and ink and pencil portraits of these painters and sculptors puts faces to names that follow throughout the exhibition. Among them, a longhaired and scruffy Robert Graham looks out at his own work: Cryptic dioramas with tiny nude figures displayed on pedestals in the same room. Barchardy’s 1978 portrait of Ed Ruscha hangs front and center, his detailed face staring off into space atop a more loosely rendered body, while Bachardy himself stands proudly, his mustachioed face and only the contour of a body, within a frame among his numerous subjects. In another playful arrangement, Pagel juxtaposes Bachardy’s drawing of David Hockney with Hockney’s portrait of “Henry Geldzahler at Le Nid du Duc,” a 1969 ink drawing of the famed art critic and curator, and Dennis Hopper’s 1963 photograph of Hockney and Geldzahler with Andy Warhol and Jeff Goodman. Below these, Richard Pettibone’s “Andy Warhol (Mao)” portrait captures the Pop artist by recreating his famous “Mao” image on a small square canvas. The curator proves that these very different parts may be solidly connected, after all. 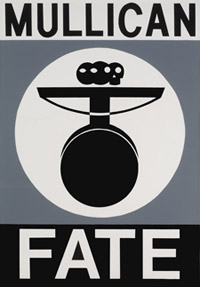 In the “Places” section of the show, six lithographs from John Baldessari’s 1976 “Raw Prints” series feature only sparing marks in largely negative space, while mysterious photos of people walking the LA streets, most with their backs turned, are affixed to one corner. Matt Mullican’s work dominates the room, specifically six large posters created using lead paint that read: Life, Death, Heaven, Hell, Fate and God below Mullican’s bold graphic representations of these concepts and his name in block letters on each. Across the room, the artist has drawn what appear to be more rendered and quiet versions of the graphics in his posters. “Untitled (Study of Four Parts to the Gateway to Heaven)” has four objects, one of them looking strikingly close to the glyph on his Fate poster. 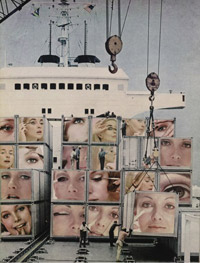 Hanging from the ceiling, 10 tapestries by Mike Kelley together make “Pansy Metal/Clovered Hoof,” a 1989 piece that bears resemblance to propaganda posters and reflects the feeling of Mullican’s work. Kelley, who committed suicide in late January, had a punk-rock ethos and sensibility, which is evident in these images, including skulls, a swastika, penis wearing a crown, bones, the number 13 and a fanged devil with the umlaut-adorned name “Mikë Këllëy.”

Ruscha prints of insects alongside a piece of torn and stabbed blue canvas by Joe Goode, from his Vandalism series, speak of dingy apartments, dwellings of ill repute and the kinds of places young artists in a growing scene might live. In the center of the room, long cases display various artist’s books, postcard sets and vinyl records by Ruscha, Robert Heinecken, Baldessari and Jack Goldstein, among others, vividly demonstrating the excitement and adventurousness of these artists in LA. Bevan Davies’ photographs and work by his contemporaries depict various buildings and sights in the city, grounding the culture to a physical place. 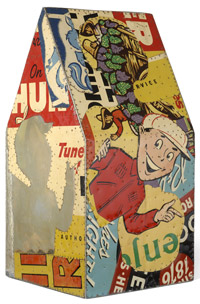 Tony Berlant’s large collage of clothing, “Betty, Betty, Betty” and “Sandy,” his house-shaped object wrapped in printed aluminum are standouts among the “Things” in EST-3. A large number of the objects presented are made from one form of plastic or another. These brightly colored acrylic, resin and fiberglass shapes are obviously indicative of a sculptural trend in Southern CA during the represented decades. The works by artists including John McCracken, Peter Alexander, Ron Cooper and Craig Kauffman, to name a few, are pure form and color, fetish objects that seem to oppose the New York sensibility. But DeWoody, who bought them, does have homes in Manhattan and the Hamptons.

Her collection of CA work is just the tip of the iceberg, according to Pagel. He said DeWoody owns very high-quality work and she enjoyed EST-3 so much that it would be no surprise to see other parts of her fantastic collection exhibited in the future. Pagel said he’d bet on it, and with a grander, more spacious Parrish on the horizon, the possibilities are boundless.

All photographs by Gary Mamay