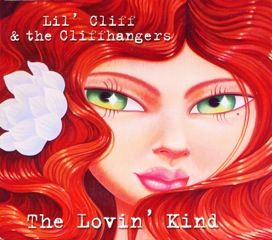 Well, you’re my butterscotch lollipop honeysuckle sugarcane
What a sweet little girl gonna drive Lil’ Cliff insane
When I smelled the sweetness of her candy yams
Yes, I knew right then gonna change my plan

–from “Creole Belle” by Lil’ Cliff and the Cliffhangers

Lil’ Cliff & the Cliffhangers have been singing the blues for over twenty years and the band’s latest CD, “The Lovin’ Kind,” has already made the Roots Music Report for one of the top 50 national blues releases. The Merrick-based quartet–Lil’ Cliff Bernard on lead vocals & harmonicas, Rick Street on lead vocals & upright bass, Dennis Phelps on lead vocals & guitars, and Frank Patterson on vocals & drums– was influenced by blues, swing, jazz and R&B greats like Walter Horton, B.B. King, Duke Ellington, Count Basie, Dinah Washington, Fats Domino, and the Coasters.

“What separates us from just about anybody else is our unique material, along with the strong vocals and harmonies,” notes Bernard. “Our music is a gumbo blend of jump blues, New Orleans influenced swing, blue-eyed soul and 50’s era R&B reminiscent of the street vocal bands from Philadelphia, Detroit, and Brooklyn.”

The band has a strong following, with some loyal fans, or “Cliffhangers,” who have been attending shows for the past 20 years. And charismatic frontman, Lil’ Cliff, who also does voiceovers for AT&T and Cablevision, looks forward to performing at Lola’s Kitchen & Wine Bar on Saturday night:

“We’ve been performing at Lola’s regularly for more than two years,” says Bernard. “and we’re featured there on a regular rotating basis (about every 6 weeks). We have a strong tie to Lola’s owner, Mark. He gave us one of our earliest bookings at the former ‘Big Easy Roadhouse’ back in the early 90’s where we played every Thursday night for several years. We’ve also done commercials for them and have built a strong following there.”

The quartet, a Top 10 Finalist in Memphis’s prestigious International Blues Challenge, will be playing original music from all three of their records along with some “off-the-beaten-path” covers from less known blues and swing artists. Some covers you may hear: “Oopin’ Doopin’ Doopin” (by George Harmonica Smith), “If Walls Could Talk” (by Little Milton Campbell), “Twenty-Nine Ways to My Baby’s Door” (by Willie Dixon), “Lonely Avenue” (by Doc Pomus for Ray Charles), “Come Back Baby” (by Ray Norcia for Roomful of Blues), “Poison Ivy” (by Leiber and Stoller for The Coasters), and “Lemonade” (by Louis Jordan).

“We’re currently recording new material in the studio for our fourth CD to be released toward the end of this year,” reveals Bernard. “There are some great new original tunes on this CD– some heartfelt ballads and a couple of our trademark kickin’ upbeat danceable numbers that we’ll preview at Lola’s this Saturday.”

So head to Lola’s on Park Ave. in Long Beach on Saturday night for the 9:30pm show free of charge. For more info check out: http://www.lilcliff.com/