Do you have to be told to host a party? It’s not about being your turn, it’s about not having to drive home afterward. Ok, maybe a little bit of both. The reward is getting to control who comes. Seriously though, isn’t it time you treated your friends to a good time, just because? You could go the campy route (like, if your mother were in charge) and make it all matchy-matchy with everything from theme-based napkins and plates to personalized cupcakes, but would you want to go to that party? Exactly. Instead, you can use the theme as an excuse to get everyone together…

April 14: Tax Eve Crunch
None of your accountant friends will be there, but you owe it to them to play as hard as they’ve been working. Feature drinks could include The Taxman, Income Tax Cocktail and 151 Rum. Why the Bacardi? It’s considered to be “overproof” and even if some might not need it after filing their returns, it’ll be a lot of fun. If someone asks what he can bring, an inflatable doll will come in handy when you want to play Punch the Tax Man in the Face. If that’s too much (and really, it should be), wine is probably a safe bet.

April 22: Earth Day
This is a family-friendly event you can host at your home or local park (does anyone go to parks anymore?). The concept is the same as when you were in Sister Mussentuchit’s grade school class: You plant something. Just make sure it’s DEA friendly. Suggested beverages could include those that are eco-friendly. Organic wines, for one. Long Island’s own LiV Vodka, for another, the artisanal spirit is crafted from one of our local potato farms and it’s clean, almost like water.

May 5: Cinco de Mayo
It lands on a Saturday this year and you owe it to yourself to make this one happen. For kicks, hire a mariachi band to show up right around 10:40pm. By then, everyone will be at a point where they’ll dance right along. Just make sure to invite your neighbors beforehand so they don’t complain. Or get your payback for their yappy dog and don’t invite them, but that’s between you two, isn’t it?

Spring Soundtracks
Windows down. Volume up. 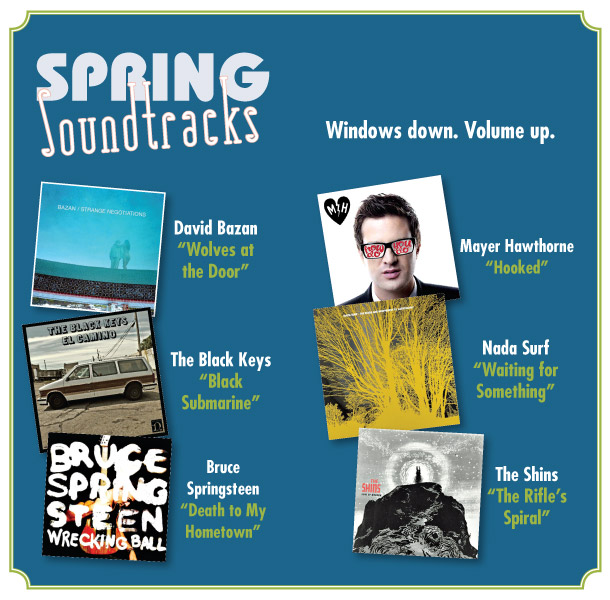