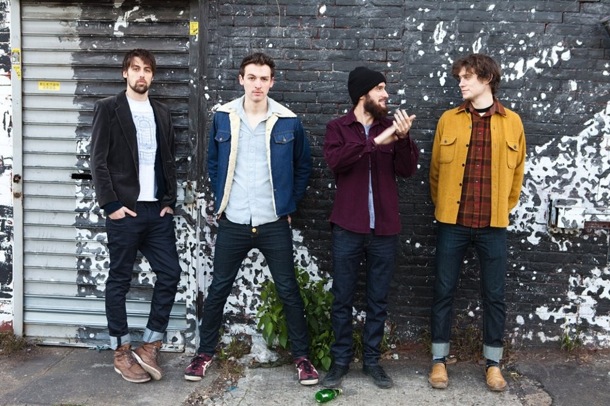 What’s so bad?
For no reason at all
I feel so sad
Let’s go running 40 miles
Or stay up 20 days
Let’s do something, I’m not tired

When Brooklyn-based indie rock foursome Motive recorded the song “Nobody Eats My Dinner” on their self-titled debut, the group never imagined it would be associated with Mitt Romney. Earlier this year, a fan named Sarah Haile-Mariam thought the song’s lyrics (e.g., “Nobody Loves Me/Nobody Waits by the Stairs/Nobody Hates Me/Nobody Really Even Cares”) were apropos for her well-edited compilation of clips of Romney interacting with others. Soon enough the amusing video featuring Motive’s song went viral becoming fodder for political blogs. Check it out here: http://www.thenation.com/video/165805/nobody-loves-me-mitt-romney-music-video

And what did Motive think about it?

“It was funny to see that,” admits lead singer/guitarist, Nick Wold. “But it was surprising because we don’t write about politics. We think music is the opposite of politics, but they have our blessing if they want to use our songs… We wrote it on a long day when I was expecting a ton of emails and got none.”

The band –including lead guitarist Dave Leondi, bassist Andrew McGovern, and drummer Chris Bagamery– recently released two new singles: “What’s So Bad?” and “Lay Some Light.” The innovative video for “What’s So Bad?” premiered on MTV’s “120 Minutes” earlier this month. Although it was filmed in Madrid, Motive did not have to travel– their boxed heads were digitally rendered onto the actors’ bodies.

“This awesome filmmaker named Daniel Etura from Spain wanted to do the video,” notes Wold. “We never met in person. We just sent our heads over the Internet from New York, and it came out great.”

Originally from Seattle, the twenty-somethings have 90’s grunge music “deep in [their] psyches,” and their latest singles were mastered by Joe LaPorta, who has worked with the likes of Vampire Weekend and The National (both bands one could see Motive touring with). Upon moving to New York, Motive got more into post-punk and rock of the 2000’s. And at times Wold’s voice resembles that of the Strokes’ frontman Julian Casablancas.

When the quartet hits the stage at Pianos in NYC on Saturday, April 14th, they will be playing music off of their eponymous EP, the 2 singles, and some new music from an upcoming EP set for release in May. You might even hear a cover of Pink Floyd’s “Comfortably Numb.”

So, check out Motive at 10pm on the 14th. For more info: http://www.motiveband.com/music.php