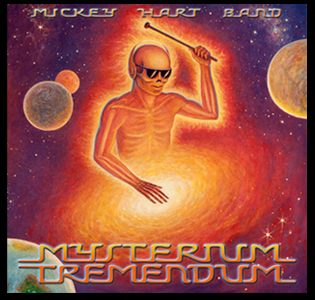 With the help of cutting edge technology and Nobel Prize winning physicist (and Deadhead) George Smoot, Grateful Dead percussionist Mickey Hart has been recording the sounds of the origins of the universe for several years. This mind (and time) bending research has culminated in Hart’s Mysterium Tremendum, a collection of deep grooves, orchestrated polyrhythms and intergalactic group think.

In making order out of chaos, Hart has surprisingly abandoned his profound and authoritative mastery of “the strange.” Every track on the album – from the endless array of acoustic and electric percussion to the tasty guitar washes and bottomless bass tones – has its proper place and the results are shockingly cogent. Where one might anticipate random space, one gets a hard, straight line finely beaded with pearls of weirdness that, when aligned, make sense – maybe too much so.

Hart works out of his home crafted studio in Northern California and the quality of the both the tracking and the mixes are impeccable. Hart’s live interpretations of these recordings feature musicians from far and wide – and the celebratory, exploratory, Carnivale vibe is indeed infectious.

The prevalence of spiritual lyrics (contributed largely by the inimitable Robert Hunter of GD fame) and vocals are a surprising new twist to Hart’s recorded repertoire, and they have an unexpected grounding effect when the listener might prefer the drifting, fuzzy-bubble abyss of “the deep end” that Hart has been so adept at cultivating for over 40 years. With the layered, global and universal beat throbbing as it does in all of Hart’s musical journeys, one might only imagine the transcendence with Paul Simon or even Perry Farrell up front on this effort.

That’s the next universe Mickey Hart needs to explore.