Over the years, Long Island has seen a glut of music venues come and go. Some fruitful like the esteemed My Father’s Place. The majority of others, like The Downtown or The Vanderbilt, have taken fatal nosedives almost immediately upon entering this unpredictable business. And sure there are the middle-ground venues that seem to float in this marketplace (Mulcahy’s), but they cater more toward the Long Island bar crowd than the actual live music scene.

Enter 89 North: Patchogue’s brand new venue, which is the brainchild of four friends who have been hard at work for the past two years repurposing the abandoned Moose Lodge on North Ocean Avenue. The space has a capacity of 443 people with a state-of-the-art sound system, a bar that’s stocked with an assortment of craft and local beers and a scheduling aesthetic that’s bent on bringing in today’s most sophisticated talent.

This group of friends consists of Angelo Galeotafiore, of DelFiore Pizza & Food Co. and the Italian pork store. Then there’s Dan Welsch, the talent buyer and audiophile, who happens to also run Suffolk Audio/Video (a custom audio installation company) and a recording studio right around the block from the new venue. And lastly, there’s chief audio engineer Daniel Mosko and his associate William Howard, both US military veterans and musicians.

I write down the words “real love” and underline it twice on my pad.

“Are you interested in making the next My Father’s Place?” I ask the group, ready to write down the answer I imagine they’ll say.

“I suppose so,” Welsch laughs. “Patchogue is just that kind of town. It’s an art town. It’s got a great vibe for a place like that.” His observation is precise because when you walk along Main Street in this small bay village, there’s this uncanny feeling of a town coming to life, and it’s infectious to be around this energy, to be a part of what many would say is a cultural emergence.

This artistic development is the result of the vibrant Friday night live street music festival “Alive After Five,” the sumptuous Patchogue Theatre, the up-and-coming Artspace, which offers affordable housing for artists, a load of good places to drink and listen to music, and various other emerging exhibits throughout town. It’s no wonder the hip and folksy Great South Bay Music Festival makes its home here annually. The only thing missing is a quality midsized music venue, which could host the most cutting-edge performers out there, a place that will shuttle in the local acts that are just heating up and the national acts that are intent on “making things happen.”

Mosko looks me straight in the eye and says, “We want the best acts in here. And if we have the best acts then we need the best sound possible.”

When I walk around the venue, despite the fact that it still looks like a construction site, with a flow of wood and nails blanketing the floor, I’m overwhelmed by the open floor plan and towering ceilings. With its roadhouse appeal, “mile-long” bar, a floated stage, VIP seating area, high-tech sound system and a giant green room for the musicians to relax, it doesn’t take much effort to realize this place could be a sanctuary for the LI music scene. They even mention how they’ve contacted hotels in the area to offer their national talent accommodations.
“We want to treat the talent the way they should be treated,” says Howard.

“And what talent can we expect?”

Welsh intercedes, “We’ve got Maddock, James Maddock that is, and Roomful of Blues, Garland Jeffreys, Jen Chapin, New Riders of the Purple Sage and some more national acts that we’re waiting on contract signings with. But we want to bring in the local talent too from all over, including Brooklyn and Manhattan. It’ll be all sorts of stuff in here—folk, indie, pop, classic rock and some excellent cover bands. And we’ll have two nights a week to support the local music scene too.”

When I ask Welsch why he thinks it’s so difficult to succeed in this business, he responds, “Every business is a risk. I mean, restaurants fail all the time, right? With a music venue, you need to bring in the right talent, I suppose. People will always love live music. Especially today, when people don’t buy records anymore. They spend their money on going to see shows. So you’ve just got to make sure your venue is in a good location with good sound. Treat the people right and they will come. As for why other places necessarily haven’t worked in the past, I’m not sure. But I know we’re putting our best foot forward and in the last few years Patchogue has slowly become the music capital of Long Island. And we’re here to be a part of it.”

The crew and I shake hands, I thank them and I’m off, leaving with this warm feeling that something fantastic is bound to come. These four guys have emptied their souls into this project and you get the sense they’re in it for the long haul. But the story doesn’t end here. I still need to talk with the people around town to see how they feel about this new venue.

When I walk out of 89 North, I stumble into Mayor Paul Pontieri outside that $100 million new village construction site at the Four Corners. Now I’ve only heard good things about the mayor and how he’s completely devoted to his village, so much so that you’ll occasionally see him picking up garbage off Main Street.

“In all seriousness, can I ask you about 89 North? Do you know anything about the place?”

“Well, I was just over there last week and I know it’s the perfect sized venue. Even with 500 people it’ll never feel empty for any act.”

We move onto the topic of the giant “green room” and how the crew from the venue are really good people. Then we’re suddenly shaking hands and he’s on the move.

I need to refocus, so I walk into the brightly lit Village Idiot for a drink to balance my nerves and for perhaps a chance to really expose the underbelly of this town. It doesn’t take long before I’m a few Jamesons deep asking anyone who’ll listen about 89 North.

I approach this one old-looking young man bracing a double whisky, and ask, “What do you think about 89 North, the new venue in town?”

He doesn’t respond. He just walks to the other side of the bar.

“It’s going to be the talk of the town!” I shout, but he keeps walking. I order two more shots.

I walk up to this other lady whose breasts are elbowing out of her tube top. “Do you like music?”

“Of course, honey. Doesn’t everyone?”

“So why do you think music venues don’t last on Long Island?”

“You’re funny. You’re not from around here are you?” she laughs.

“No, I’m actually from Nassau County, but don’t tell anyone. I don’t want to get beaten up.”

“No one’s going to hit you here, cupcake.” I thank her for her reassurance, pay my tab and head across the street to Public House 49. It takes a second to realize that compared to the rest of the crowd inside I look like I’ve rolled out of a dumpster. I order a couple of shots and find a group of guys who have their arms around each other (“bro-mance”) arguing about the prospects of NY Knicks sensation Jeremy Lin’s fame and his recent injury.

I interrupt, “He’s not going to make it for the long haul. He doesn’t have what it takes. I’m a big Knicks fan too.” They just look at me as if I didn’t know what I was talking about. I continue anyway, “By the way, are you guys ready to take on a new music venue?”

One guy answers, “Why wouldn’t anyone be ‘ready’ for a new music venue? That makes no sense, buddy. Everyone likes live music.” I don’t know if this guy was angry or just drunk.
“Well, do you go out to see shows often?” I ask.

“Not really, Manhattan is too fucking far from here. And who the hell is going to drive out to Stephen Talkhouse? We honestly don’t get any of the good stuff out here. It’s all old man guitar-slinging bullshit or just some dated mechanical jazz nonsense. Or fucking hip-hop or that dance music bullshit. I can’t dance, brother,” he laughs. “So I’m guessing you’re not from around here are you?” How does everyone have my number? 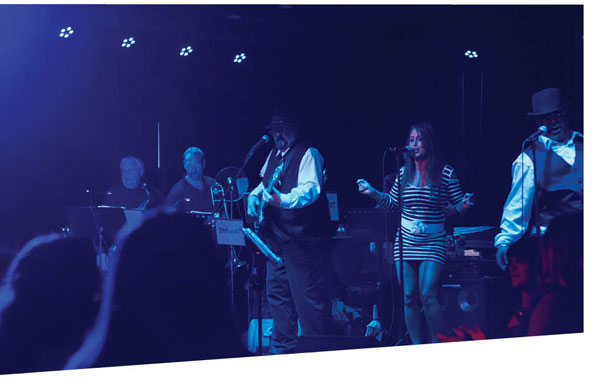 “No, actually, I’m from Patchogue. North Patchogue, near Medford, but it’s still Patchogue, to be precise, born and raised,” I lie because I’m not interested in that aforementioned beat down.

But then, for whatever reason, these guys are buying me successive rounds of shots and soon I’ve got my arm roped around this one guy who calls himself “Boon.” “I’m beginning to like this Patchogue place, Boon. It’s got great character—it’s beautiful, you know? I see why people live here,” I say.

“I thought you said you were from around here? You’re a weird fucking dude, you know that, man? I suppose you’ll do though,” he laughs.

Suddenly, I no longer feel like a stranger in this town; it seems that the people here are willing to accept anyone or anything for that matter. Musical or otherwise.

Before I know it I’m out on the pavement and the stars are gyrating. I walk past the Patchogue Theatre and it’s dark, so I stop in at Bobbique for some old-fashioned blues guitar rock and then it’s off for a nightcap over at the BrickHouse Brewery. It’s more of the same. Everyone seems to be excited about this new venue. I tell the locals about the grand piano, the organ, the high-end amps and everything I know about the setup. One guy asks me if I’m getting paid good money to sponsor this place, but I don’t know what the hell he’s talking about, so I remind him again, “I’m just writing an article, amigo. Just an article.”

Besides some more random bro-mance outside on the sidewalk I don’t recollect much else. I vaguely (and embarrassingly) recall stomping my feet along with a crowd of enthusiasts singing that damn James Blunt song, “You’re Beautiful.” And I think some balding tattooed guy in a Metallica t-shirt approached me and asked, “You looking for trouble there, stranger?” It made no sense. Couldn’t he see that I was trying to have a good time singing along?

But that’s it. The story ends here.

Well, unless you’d care to know that a taxi picked me up outside the Congregational Church at 4am or how I tried to call the mayor on the way home to thank him for everything he’s done.
Oh, and one more thing: Welcome, 89 North. I think Long Island is actually ready for you.

Live in Patchogue
Come to 89 North