It’s Saturday morning at CrossFit Stony Brook and the big clock is ticking. A fixture at all CrossFit gyms, the clock counts down as two athletes grind their way through the second in a series of CrossFit Games open qualifiers. The WOD? A 12-minute AMRAP of snatches stopping every 30 repetitions to add more weight.

I know what you’re thinking. The same thought ran through my head when I walked into my first CrossFit gym last April. What does any of this mean? WOD, AMRAP, kipping, snatch, burpee, Tabata. The CrossFit lexicon can be intimidating to outsiders. But an explanation of the various nicknames and acronyms you’ll find in any CrossFit facility— known as boxes—would just lead to more confusion. You really just need to know that WOD stands for Workout of the Day and you can fill in the blanks from there. The key to understanding CrossFit is realizing that it is for anyone and everyone, in shape or not. 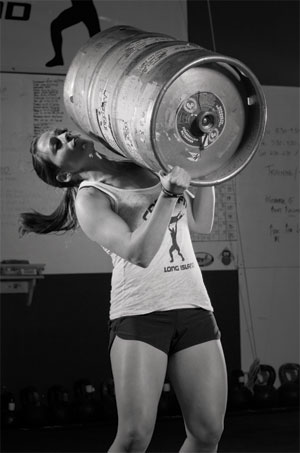 The high-intensity training you’ll endure at CrossFit is a balanced blend of the three major fitness standards: Metabolic conditioning, weightlifting and gymnastics. The idea is to keep things short and intense, and to keep it varied. According to CrossFit doctrine, “Routine is the enemy.” This approach can appear daunting to new members. And with such scope, CrossFit can be difficult to define.

“You could talk to six different people and get six different explanations,” said Scott DeTore, owner and trainer at CrossFit Kryptonite in Center Moriches. “Even Greg Glassman, the guy who founded it, said, ‘I can’t explain it. You have to do it.’”

Glassman developed CrossFit as a training system for law enforcement in the 1990s, though it has earlier origins. The first official CrossFit affiliate opened in Santa Cruz, CA in 1995 and the discipline gradually spread as the internet became more accessible, creating a cult-like community of devoted followers who would log in daily for the latest WOD.

One such early adopter was Brian Costello, owner and head trainer at CrossFit Long Island. He’s been committed to the sport since 2007 and now supervises a community of 120-plus members at his 2,600-square-foot box in Yaphank. His simple explanation of the program should probably be on a T-shirt: “No real weaknesses.” That’s what he wants for his members.

“There are guys that can run marathons, but they can’t do a pushup. You’ve got guys who can squat 600 pounds, but you ask them to run down the block and forget it—they’re going to have a heart attack,” Costello said. “We don’t want to be on either end of that. We want to be able to squat a lot of weight, we want to be able to run a good distance, but we want to do everything in between.”

Despite a gradual rise in popularity over the past decade, CrossFit was still relatively unknown until recently, when Reebok came along and made it impossible to ignore.

The apparel giant took over full sponsorship of the CrossFit Games, designed an entire platform of new athletic gear around the sport and even built a 12,000-square-foot CrossFit facility on the grounds of its world headquarters in Canton, MA. A Reebok CrossFit commercial aired during the Super Bowl in February, proclaiming, “The Sport of Fitness has Arrived.”

The buzz generated for the sport has been undeniable, but it didn’t come without some skepticism.

“When Reebok first got involved there was definitely some apprehension,” said Larry Maier, co-owner and trainer at CrossFit The Rock in Rockville Centre. “People were wondering, were they going to start opening megaboxes, with state-of-the-art facilities and celebrity coaches, and kind of drive us out of business? I think Reebok has alleviated a lot of those concerns. So, yeah, it’s a good thing.”

For Maier, Denicola and Costello, trainers who have made CrossFit their full-time job, maintaining the integrity of the sport is more important than latching on to the meteor and enjoying the ride. Each owner is certified by CrossFit headquarters and can own only one affiliate. They are even required to write an essay on why CrossFit is important to them. It’s all part of a vetting process that ensures quality and safety from the owners and trainers, down to the 60-year-old lady who has never done a pushup.

“The phone has been ringing much more than usual,” Costello said, “but we can’t just open up the floodgates. It’s about quality control. We screen our members. Anyone that calls, we make sure that they’re definitely serious about joining and making the commitment.” 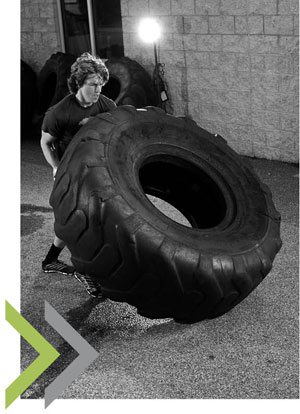 Safety is a priority in CrossFit, so this screening process is important, and it works both ways. Costello recommends that newcomers do more than search the internet to find the most convenient affiliate. Joining a CrossFit box is not the same as joining a standard gym—it’s more like enrolling in a fitness school. You won’t see hours of operation on the door, you’ll see class times. Then there’s the cost, which is about double the typical gym membership. With more than 40 affiliates on Long Island, there are plenty of options for anyone that has a real interest.

And anyone means anyone. There are just as many, if not more, novices in your typical CrossFit session than there are fire breathers who can snatch 250 pounds.

“We have a guy that’s 63 years old who comes in here and bangs out pull-ups,” DeTore said. “The guy is awesome, he loves it here.”

Carlo Mattia proudly points out athlete after athlete, listing their achievements as they bang out a vicious Sunday workout. “You see that guy?” he asks, pointing at one of the many he coaches at CrossFit The Rock. “He’s been here a year. You should see his picture from when he started.”

It’s the cornerstone marketing tactic of fitness programs—the before and after photos. The results were startling. On the left, your standard amorphous thirty-something American male. On the right, a shredded beast capable of deadlifting your sister’s Hyundai. It took him a year. And that’s one of the major differences between CrossFit and do-it-at-home models like P90X or Insanity. Those systems are advertised to work their magic in two to three months. There is no timeline in CrossFit. There are no promises or guarantees. You get back what you put into it. For many, it becomes a way of life.

“It’s hard to explain sometimes to an outsider who is used to going to the gym and putting their headphones on and blocking out what’s going on around them. But we like to make it well known that we’re like a big team here,” Costello said.

“You’re expected to be here. Everyone is pushing each other. We all love this program and love these workouts. Everyone comes from all different walks of life, but when we’re in this gym, everyone feels comfortable being part of this movement.”

Atlas Stones
About as strongman as it gets, stones provide a brutal workout that combines balance with full-body strength. Make sure to chalk up.

Keg Lifts
Similar to stones in that balance and control is crucial, the keg should be deadlifted to your lap where you’ll need to readjust your grip on the fly to pop your hips and thrust it up to your shoulders.

Snatch
One of the most difficult and complex Olympic lifting movements, the snatch is a wide-grip pull with a loaded barbell from the ground to overhead.

Rope Climbs
A gym class staple, the rope climb is a serious full-body workout. Method is vitally important to multiple ascents during high-intensity WODs when the clock is ticking.

Pull-Ups
Everyone knows what a pull-up is. In CrossFit, there are a few different ways to get your chin (or in some cases, chest) over the bar. The kipping pull-up uses a controlled swing to thrust the head above the bar. The butterfly pull-up is more of a leg-pump motion, and is faster. Both methods are all about rhythm and take time to master.

Muscle Ups
The Holy Grail on almost all CrossFitters checklists, the muscle up is arguably the most difficult movement that CF regularly employs. Using a set of hanging gymnastics rings, swing yourself up into the dip position and push yourself upward until your arms lockout.