Why is requesting and consuming well-done red meat considered to be a felony by people who prefer it rare? No stranger to fine dining worldwide via travel journalism, I’m routinely alarmed by rare beef aficionados who never hesitate to glare contemptuously at well-done meat eaters as executable heathens. It seems as rude as someone approaching a stranger wearing pink and stating, without cause, “That color makes you look disgusting.” I’ve never met a browned beefeater who felt compelled to belittle fans of pink cow on a plate. Why is this transmission of cuisine contempt a one-way street? Is preferring beef that tiptoes toward bacon—instead of raw bloodied cannibal mode—a culinary crime? I’ve ingested underdone parasitic meat before and never want to court that gamble again. And oh yeah, I think it tastes better cooked.

So, I decided to do something about this state of animal protein affairs at a recent international hotel media lunch in New York City. I cordially sent back the gorgeous filet of prime beef poached in olive oil that was served for a tad of browning. As usual, someone at my table, a Martha Stewart Living radio personality, leered scornfully at me and announced, “Why ruin a perfect piece of meat? Anyone who wants well-done beef at my house is on their own.” Nice to meet you, too? 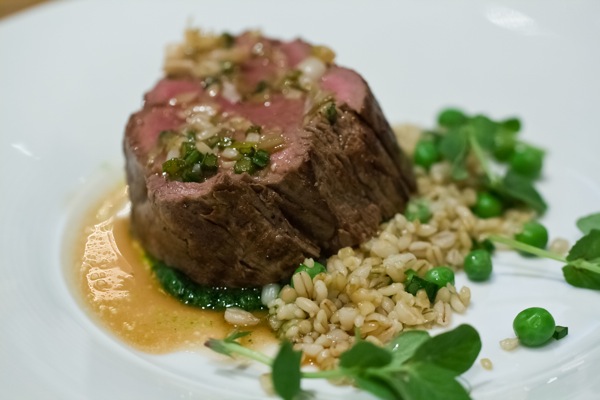 Roast challenger number 5,000 was the lucky winner of my bottled rant. My first instinct was to approach her later and point to her not-bad-looking shirt and inquire, “Seems like someone likes to buy clothes at K-Mart?” I’d hit my breaking point and wanted to enlighten the self-elected food lord about how it feels to be on the other end of an unprovoked judgment. Instead, when a microphone was passed around to the media to ask the celebrity chef questions, now amplified, I started, “The meal was incredible and that was a dazzling cut of meat.” Then, after a peripheral glint at the carnivore umpire, I continued, “When I sent mine back to the kitchen for a slight browning, someone at my table peered at me as if I should be beheaded. Is that proper behavior in a humane society?” Message sent, I got a laugh, and the chef mused about options for caramelizing filets.

I’m not inexperienced regarding food and not just because I’ve eaten pretty much every day of my life. I’ve gone without it for three days while in a Utah desert survival school, only to regurgitate the contents of my stomach after my first opportunity to consume—the liver of a sheep I’d just slaughtered and cooked on a fire started without matches. Liver and most organ meats are the only rations on my no-go list. But the only thing I don’t like about liver eaters is their breath. I’ve sipped malbecs infused with glacial ice in Antarctica while watching whales breach and spent days deep in the rice-terraced Northern Philippine mountains inside small huts with elders whose job is watching food grow 24-hours a day, so they can fend off thieving “rice-birds.” I’ve devoured gourmet moqueca in a five-star penthouse overlooking Rio, sampled open-fire cooked game in Zimbabwe, and had dinner delivered to my room—where the previous guest was the Queen—in an English countryside castle.

My new pal may live the Martha Stewart life, but I’ve lived too. Did I mention enjoying 10 different types of hummus in a friendly Syrian home, testing mofongo (mashed plantains seasoned with seafood, chicken, or beef) at a breezy seaside Puerto Rican food festival with three of the island’s top chefs, or sharing fries with Journey’s Filipino lead singer in Manila’s Hard Rock Café? Are you bored yet?—caviar at a private dinner in Russia’s Kremlin, hearty bean soup with a Bolivian family who grew the ingredients, Scottish delicacies in the manor owned by the family who invented Glenlivet, and sautéed char while floating near the North Pole in sight of polar bears.

When I ask most self-proclaimed foodies—the types most prone to insult brunette beef—if they’ve ever worked in a restaurant, the answer is almost always no. Starting at age 15, I spent 10 years working in reputable restaurants. That didn’t verse me in the truffle shuffle, but it taught me to discuss food with the pros, namely chefs. Since then, I’ve been contracted by several publications to review restaurants—not posing as a foodie, instead perceiving restaurants as travel destinations. If you don’t fit inside the box, climb on top of it and have a good look around. Or head south—I’ve enjoyed dining with peers in Argentina and Uruguay, pinnacles of fine beef, where fully cooked meat isn’t frowned upon, and often preferred.

I can draw another comparison to this insidious ilk of seesaw bullying—where the heavier kid stays amused by dangling the lighter kid, unaided in mid-air. My Dell laptop has been humming on bumpy roads for 10 years. I’ve never ogled someone pecking away at a Mac and consulted them starting with the word ew. Reverse this brand scenario and the condescension seesaw tilts only one way.

So, beware rare meat connoisseurs, next time you think about insulting someone who likes his or her meat cooked through, think about that pink outfit, your shirt, and your manners. While dining in an Andy Warhol-themed restaurant in Slovakia, a diplomat shared a time-tested Slovak maxim: “He who digs a hole for someone else will fall into it themselves.” Something else fell into that hole, and it surely wasn’t anything well-done.

No hard feelings Martha Stewart Living radio lady—I guess a steakhouse reunion is out of the question.