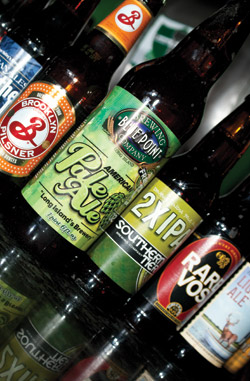 Joseph Dantona does not delineate the ethos of Effin Gruven with a definitive word or aesthetic phrase, enabling his establishment to securely fit within any specific conception.

“We are constantly progressing,” says Dantona. “Some people know us as a hippie bar or a craft beer bar, but I just want to provide a chill environment that offers quality and a good time.”

“I can create upscale burgers, and they’re still affordable,” says Bradley, who has also had culinary stints at Daniel and Oceana. “We still have our core dining entrées, which was my initial vision, but customers have more options now.”

Ben and Bobby Gulinello, broprietors* of The Cortland, agree on craft beer’s increased presence on Long Island since opening their Bay Shore-based establishment in October 2010, but continued growth is crucial for the development of a prosperous culture.

“We’re still in our infancy and there is so much room to expand, whether opening more breweries or serving good beer in bars,” says Bobby, who returned to Long Island following a nine-year stint in Philadelphia, managing “Irish pubs with no creative soul.”

“As quality beer continues to expand on Long Island, the distinction between specialty bar and bar is gradually narrowing,” says Drew Dvorkin, who opened T.J. Finley’s with Mike McElwee in September 2006. “We strive to not only be the best beer bar, but the best bar, as well.”

“There has always been a physical separation between bartender and patron,” says Dvorkin, who also owns Bronx Ale House and George Keeley (Bronx and Manhattan, respectively). “We’re trying to make our experience more interactive, and hopefully more fun for the customer, too.”

Click here to follow Niko Krommydas and his blog, Super Neat Beer Adventure, Yes!!, where you can find more on the Long Island craft beer culture.

Photo of The Cortland by Stephen Lang