For one incongruous weekend this month, the spirit of downtown New York is crashing face first into the Hamptons art scene. Presented by Keyes Art Projects and Scott Murphy, the show coming to Wainscott on June 14-17 features works by hip-hop and graffiti pioneer Fred Brathwaite, better known as Fab 5 Freddy of Yo! MTV Raps fame, and three artists Julie Keyes handpicked from her diverse stable of talent.

Galleries and collectors have been undergoing an evolution on the South Fork in recent years—shedding their Cro-Magnon attachment to local landscapes, sea scenes and stooped derivations of late abstract expressionist masters—but this is not your typical Hamptons exhibition. Keyes, a ceramist and art consultant, is among a growing number of East End dealers and gallerists forcing Homo habilis to stand on two feet and view art as full-fledged sapiens. She and others like her are finally putting real contemporary, even edgy, work on the local map. And the trend is growing.

“The people who buy landscapes and Hamptons beach scenes already know where they’re going,” Keyes said. “I don’t sell that kind of work.”

Instead, the show includes pieces by Freddy, photographer Wyatt Neumann, painter Tammy Smith and 21-year-old sculptor Evan Yee. On the surface these individuals create work that appears to be quite removed from each of their counterparts, but weaved together the tapestry of dissimilar styles becomes a logical picture.

Freddy headlines the exhibition, which is appropriately mounted at an industrial gallery space in Wainscott. A musician and artist, he was an infamous graffiti writer in New York during the 70s and became one of the first to bring the work from streets and subway cars to the walls of elite galleries around the world. Perhaps most emblematic of his position bridging the two worlds is Freddy’s famous “Soup Train,” a 1981 graffiti piece covering an entire side of a subway car with his version of Andy Warhol’s Campbell’s soup cans. He was a friend and contemporary of legendary figures such as Keith Haring, Jean Michel Basquiat, Lee Quinones, Futura and Rammellzee, but Freddy faded from the art world until street art and graffiti once again caught the interest of the gallery establishment and ushered his return.
“He’s a major force,” Keyes said, noting that Freddy has no shortage of cred in the world of street art. “Fab 5 is the grandfather of the whole thing.”

Yee, on the other hand, is new to exhibiting. The young sculptor began showing with Keyes last summer after she saw something “refreshing and unique” in his work. Using a variety of media, including welded metal, glass, found objects, concrete and live goldfish, Yee has been experimental in his creative process, but he said all the work speaks a similar language. “I like to make objects that critique the modern psyche,” Yee said. 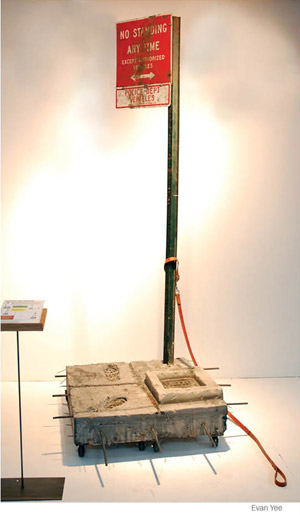 Fitting well with Freddy and Yee, Neumann’s photographs have both elements of raw sexual energy and the truth of the street. A veteran of the advertising world, Neumann began chronicling his life in various formats of film and digital photography, “anything from a Hasselblad to an iPhone,” and in 2009 Keyes took notice.

“It’s more about the moment, documenting it somehow,” Neumann said, describing his pictures of NY’s rebellious downtown scene, images from his travels through the seedy underbelly of the American west and quieter, but often more striking vistas along the road. “There is still that raw edge,” the photographer said, explaining his attraction to trailer parks, biker bars and desperate people he meets during solo cross country motorcycle journeys. Neumann said his subjects on the road are frequently battling huge race and class disparity and teetering on the edge of life and death, while downtown subjects are simply exercising their right to not give a fuck, which can have its own charms.

All four artists exhibit a sense of humor in their work, but Smith’s gestural ink paintings of dogs and various cartoonish creatures add a sense of levity to the room. “I’ve always gravitated to lightweight stuff, everyday stuff,” she said. The images are fun and joyful in their look and execution—it is obvious that Smith derives pleasure from the act of making them. She uses black ink and acrylic stains on xuan rice paper from China, and models the work after that culture’s brush painting.

Many of the pieces have scribbled, illegible words and glyphs alongside and behind Smith’s wide-eyed subjects. “I like writing, I like calligraphy, I like fast,” she said, explaining that the “words” are often backward, upside down, in another language or total nonsense. “It becomes decorative,” Smith said, noting that even her subject is, above all else, a vehicle for the act of painting.