M2D imparts an overall sensibility reminiscent of a family-style hippie-caravan that uplifts with their love vibe and then kicks your ass with their music. You feel content, disarmed and receptive when you hear their genre-defying rhythms and grooves wash over you, but it doesn’t take long to realize this river runs deep. They are a local family band giving you the best of both worlds—joy and pain, so to speak—and their infectious sound is the entry point to a place that is so familiar, it’s like déjà-vu.

Miles to Dayton (m2d) actually lived the role of the “lonely hearts club band” that The Beatles briefly wore as a playful mask. It was in 2004, at local coffeehouses, that three Centereach twenty-somethings (Jon Preddice and siblings Krista and David March), each derailed by love gone south, first summoned the melodic earthy sounds that would soon become an m2d trademark. Jon, a classically trained cellist and compelling singer-songwriter, said of their early musical rapport, “Music was a natural way for us to deal with things… We instantly knew we had something special.” Although only a trio, the group had three singers, two acoustic guitarists, a bass player and a cellist to mix it up as they saw fit. Referring to the underlying tone of the period, Dave said dryly, “It was like a love hangover.”

The threesome didn’t turn away from the dark quickly, though. When it came to choosing a name for the band, they plunged deeper still. The meaning of the name Miles to Dayton has nothing to do with failed relationships or the proximity to a somewhat non-descript Midwestern city. It is a metaphor for the journey we all must travel before seeing deceased loved ones again. And pause in the field of pain is just what they did in the beginning. m2d put out their aptly-titled debut, A Long Way Back, in 2005. The relatively dark ballad-based record covered such subjects as the loss of Jon’s grandfather Dayton as well as the founding members’ romantic train wrecks. Besides serving as an emotional release for Krista, Jon and Dave, the album planted the seeds for a grassroots fan base. Dave, who played bass on the record, said with a laugh, “There were a lot of people going through what we were going through…One lady even used the record at a bereavement group.” 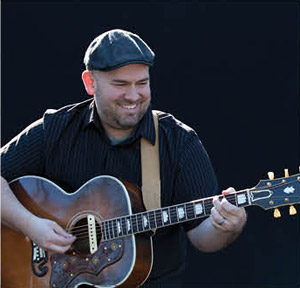 Their hearts thawed soon enough, but their ability to draw inspiration from both sides of the emotional ledger would remain a powerful undercurrent in their music. It was not only the effortless three-part harmonies or the way Dave’s bass and guitar seamlessly blended with Jon’s cello that introduced a frisky current of destiny into the mix. In 2006, Jon’s younger sister and classically trained violinist Leanne Strom joined m2d. Wielding an electric violin, she broadened the band’s reach beyond its well-honed acoustic orbit and launched it into a gorgeous otherworldly gypsy rock landscape. “She is definitely our Slash,” remarked Dave, when speaking of Leanne’s stage presence. With the addition of Robert Caniglia on drums and Leanne adding a fourth voice to the harmonies, the band could stop on a dime and veer from a CSNY vocal crescendo to their unique brand of J.S. Bach-infused fireball funk.

Jon began rocking it up more and more on guitar, leading to m2d’s release of the optimistic Rise in 2007. Songs such as “The Voyage of Me” became anthemic of the band’s broader view, which had finally come to include hope in the picture. Many fans from the band’s intimate coffeehouse days were now friends and vocal supporters. m2d began playing such venues as The Stephen Talkhouse, Acoustic Long Island and the Boulton Center. In the middle of a gig at the Patchogue Theatre in 2008, after dating almost since the beginning, Jon proposed to his golden-throated Krista. Publicly elevating the seriousness of their commitment to each other was not only a joyous, climactic event for Krista and Jon—it was a watershed moment for the entire group. The sense of the band being “family first” had transcended the trust born of sibling solidarity. It was now equally grounded in the singular choice that is marriage.

The band was rollicking in a happy whirl by 2010 when a bit of real life stuff kicked up and the group needed a new drummer. The third and perhaps most highly evolved incarnation of m2d was to begin shortly after drummer Brian Kroll spiritedly introduced himself to Dave at the 2010 Rock the Harvest Festival at Pindar Vineyards—an event the band played sans drummer. “I am the adopted child,” is how Brian described his rapid assimilation into the intimate lineup. Like Leanne and Jon, Brian is both classically trained and currently works as a music teacher in the public schools.

With the band drawing inspiration from such diverse sources as Damien Rice and Stevie Wonder, and Jon (now a father) writing from a place of deep gratitude, they released the buoyant Pass It On in late 2011. The title song encapsulates the album’s theme of joyfully sharing love and music with those who mean the most. A vital contribution from Grammy award winner Bob Stander in the role of co-producer helped to create a multi-textured album that entrances, but never disorients. Syncopated rhythms, vocal incantations and reconfigured vintage sounds pervade the song set.

Recent confirmation of m2d’s expanding reach includes a positive review in the influential Lefsetz Letter. The group is looking forward to making more albums, touring more widely and absorbing more fans into the m2d “family.” A pained beginning has given them a strong foundation and an appreciation for their current good fortune. Successfully making music with loved ones seems to have healed the band’s collective heart.