If you can hear around the bend—the steady hum of a man and a band on a collision course with excellence—you’re not imagining things. Last Charge of the Light Horse is breaking through.

Somewhere between Sergio Leone and Neil Young’s Crazy Horse, between the dirt roads of Calexico and dark corners of Edgar Allen Poe, lies Coram’s Jean-Paul Vest, the driving force behind the Last Charge of the Light Horse’s sound; a tapestry of warm rhythms and jangling guitars rich with reverb shimmering on the edges. The melodies are pure steady motion—each hook its own worn, weathered red ‘57 Cadillac streaking toward the night on a one lane strip of lonely blacktop across the farthest corners of the mind.

Vest is not only a crafty guitar player with a little bit of Ronnie Wood posturing and a cool cross-picking touch, he’s also a poet’s poet, a weaver of slightly fuzzy, sepia-toned tales that shift easily between forlorn existentialism and front porch folk. Last Charge of the Light Horse reveals itself as something perfectly American in its paradoxical dance of hope and despair. Vest comes to us as a roving gypsy in a homespun world, a one man caravan wrapped in an earthen tapestry of dusty browns and rusted reds that speaks to the wanderer in all of us.

traveling at this speed
our love seems a fragile, ghostly thing
to depend on so completely
when the headlights won’t reveal
where we’re going
just the next few feet 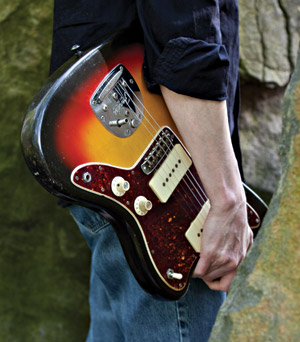 “My mother is French and my father is a blues musician from Alabama,” explains Vest, connecting the creative dots of his past. “They passed along their love of music and literature to my brothers and me. Though we were born and raised in the United States, we grew up fully immersed in French culture as well. Later on, when I was a teenager, we lived for a year in Romania and did some traveling in Europe. The perspective of experiencing a foreign culture as an outsider and then returning home and seeing my own culture through different eyes has stayed with me.”

Vest co-creates his magic with a tight-knit rotating cast of supporting players whose musicianship is rivaled only by their friendship.

“I have a fantastic group of musicians that help me bring the songs to life,” said Vest. “Shawn Murray is an excellent drummer. He and bass player Pemberton Roach play off each other’s ideas in a way that never ceases to amaze me. Pemberton is an excellent songwriter with a sharp sense of humor. Bob Stander can just flat out play guitar. His playing adds so much depth to the sound. I love that they’re all so well versed in music I’ve never heard of. If blasting (Norwegian jazz guitarist) Terje Rypdal for two hours in the car on the way to a festival gig in Delaware doesn’t open your mind to a few possibilities, nothing will.”

Together, this local “band of gypsies” captures all of the burned up, blissed out passion and pathos of the American haze, where being lost is ok and getting lost is even better. The signposts of workingman’s Taoism that dot Vest’s landscapes are solemn but significant, pointing deftly to winding turns of fate and happenstance, endless stretches of kind confusion and the little pot of gold at the end.

All troubadours are restless at the core and Vest is no different. He can sense his own clock ticking and he knows when to shift gears. For Last Charge of the Light Horse, that time is now. For all the band’s evolution to this point, it’s clear that with their new EP, Curve (2011), Vest and Co. have turned the screw.

Curve takes the signature highway sound of Vest’s earlier work and makes a soft left turn as it runs through an experimental Radiohead-like filter. Avant-shoegazing shards of Stereolab, Kraftwerk, Her Space Holiday and Aspera Ad Astra can also be heard as Vest moves his voice around within his range, experiments with his mixes, integrates new instruments, invites the rhythm section to take some cool chances and tinkers with his overall milieu. This bevy of new sounds, textures and approaches has manifested in a new collection of tunes that are by turns sparse, dramatic and inventive—all while retaining Vest’s grounded, earthy sensibility.

“The process for Curve was a new one for me,” explains Vest. “I took a very deliberately low-tech approach, using whatever equipment was at hand and not fussing too much with the technical aspects of recording. Just turn on an amp, stick a microphone in front of it and go.”

This simplicity and spontaneity is serving Last Charge of the Light Horse well. Steadily, over the last few years, Vest and Co. have been making a national name for themselves on college radio while keeping things simple and close to home.

“I’ve been blessed that the music has been greeted with some very positive reviews, and pleasantly surprised with the reception on college radio,” Vest said. “Fractures (2008) actually charted at number one on a few stations. I’ve always considered my music sort of an acquired taste, but in the right venues the response has been great. That’s the real byproduct of any success, the thrill of having connected with an audience. It gives me the energy to keep writing and playing.”

For the moment, that seems to be more than enough for Vest. After all of his travels, all of his creative exploration and all the music still to come, having his roots at home here on Long Island is the most important thing.

“My primary interest in making music is to make it,” said Vest. “I love the moment of creation, when a more or less random collection of works and notes becomes a song, or when a group of people stand in a room making sounds and music happens. With any luck, a few good songs will come my way and someone will want to hear them.

Lyrics from “Along the Curve” by Jean-Paul Vest. Last Charge of the Light Horse’s newest EP, Curve can be found on iTunes. For show dates and other info, visit lastcharge.com.