“Fingerpicking is a tightrope walk,” he tells me, and my mind conjures an image of daredevil appendages dancing across a line high above the circus crowd. Then I think about Philippe Petit, master tightrope walker and subject of the Academy Award-winning documentary Man on Wire, who, on August 7, 1974, secured a wire across the tops of the Twin Towers one summer morning and played his mischievous and brilliant heart out. On what it means to be an aerialist, Petit once said, “To refuse to tape yourself to the rules, to refuse your own success, to refuse to repeat yourself, to see every day, every year, every idea as a true challenge, then you will live life on the tightrope.”

This refusal to adhere to convention is at the core of what it means to be an artist no matter genre or discipline. I’m speaking with Grey Reverend today, and he knows a little something about challenges. Grey Reverend is the stage name for musician and songwriter Larry Brown. Some time long before the release of his first solo full-length album Of the Days (Motion Audio/Ninja Tune, 2011), Brown was diagnosed with a neurological condition called focal dystonia. This caused him to lose the ability to effectively use two of the fingers (the pinky and ring finger, specifically) on his left hand—a seismic game changer in the life of a working jazz and blues musician. Ultimately, Brown adapted by embracing an innovative fingering technique (aided in part because of a very large and dexterous thumb) and looking toward the folk tradition to help him make sense of the hand he was dealt (no pun intended). Thus, Grey Reverend was born. After he moved to Brooklyn’s glorious and verdant Fort Greene from Philadelphia to spend more time with his sister, he put together a sublimely intimate and stunningly evocative collection of quiet songs recorded in his apartment, which got a lot of attention. An extensive touring history in Europe and beyond with the likes of label mates The Cinematic Orchestra and others followed, as did a feature on NPR’s All Things Considered (“incredible…lovely to listen to”) and a song on NBC’s award-winning program Parenthood. Grey Reverend may be the best singer-songwriter you’ve never heard of…until now. 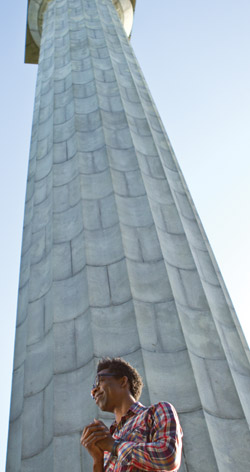 Our time together this afternoon feels more like a study of the folk tradition in a hip and smart, yet unpretentious university class than an interview for a magazine. He cites the essentials. There was the “English thing,” he says, and we discuss Richard Thompson, John Martyn and Nick Drake. Before that, we mention Guthrie and then Dylan, of course. Brown likes the Brazilians. “Bola Sete’s playing is probably one of my biggest influences,” he says, and proceeds to also reference Gilberto Gil. We hover in the mid-twentieth century, revel at Joni Mitchell for a moment and Neil Young the next and then move into the death of acoustic music in the 90s—though it was an important time for the evolution of hip-hop. By the time we reach contemporaries like Sufjan Stevens (“He’s kind of got it all.”), Iron and Wine and José Gonzalez, I realize that he’s giving me some important context for what he makes. “We’re into this sensitive kind of hipster thing,” he says, “and there’s something about introspection that’s necessary now.” When I ask why he thinks this is so, he replies, “There’s a move inwards. People moved away from the convivial since…maybe…9/11. There’s a need to return to simple music.”

The irony, of course, is that Grey Reverend’s music is hardly simple. The sound, and perhaps in some cases the sentiment, may be simple but the playing and the delivery and the precision required to pull it all off requires a lot of skill and hours and hours of intense practice, which Brown certainly endured in the early days playing jazz. Of the Days is a stark and bare record filled only with Brown’s unique fingerpicking stylings and leathery baritone. Sounds and melodies meddle in familiar territory, but the chord progressions underneath and the subtle sophistication of the rhythms that drive the music are far from typical. This is exceptional music in the truest sense of the word. Exceptional, honest, complex and true.

Grey Reverend’s songs are “little discourses” into the nature of things. They sometimes read more like poems than narratives. On this topic, Brown says, “I rarely write a song with an intention on meaning,” which is something a New York School language poet might say, but don’t fear. While the album has its share of abstraction, there’s enough purely constructed pop songwriting (dressed in gray weather) to go around.

Grey Reverend’s music is not so much filled with love songs as it is filled with songs about the idea of love, the predicaments in which we find ourselves and the images that speak to or somehow parallel those predicaments. Take, for instance, the lovely “Road Less Traveled,” which states it quite bluntly: “It isn’t worth it keeping love so close/ revolving doors could make us wise/the planet Earth evolves until she explodes/and everybody dies.” And then the poignant “Box,” which hits it on the head so well that it’s worth sharing the whole thing right here:

By the time we’re done talking about it, I’m wondering what the “box” might be twenty years from now. Maybe a photo album on Facebook or an archive on a Tumblr page or whatever else comes next. The need to look back will never subside. And that’s the thing about Grey Reverend’s work. It’s timeless. “I’m interested in making music that defies distortion,” he says, and by that I believe he means making something so true that it will be true for a long time. And lest you think that Of the Days is all about heart-shaped memories, there are also calls to activism (“One By One”) and even a semi-cryptic meditation on Barack Obama’s inauguration, “Altruistic Holiday,” a personal favorite. There’s so much poetic stuff and craft going on in these lyrics that it prompts me to ask him if he actually reads the genre. “Not really,” he says, “I read a lot of prose…biographies of Thelonious Monk…things like that.”

It is safe to say that Grey Reverend is sort of “big in Europe.” That phrase often elicits a smirk or a raised eyebrow, but in this case it’s true. His label is there. He tours there all the time. But he lives right here in New York City. This begs the question: What’s the deal with America? “I’m kind of a diva,” Brown says on the topic. “I get discouraged easily…it takes a lot for me to do it.” And by it, he means playing his brand of engaging and perceptive music in environments that support it and embrace it. He talks about the difference in audiences across the pond and the role of music in people’s lives. He’s not averse to shows in America, but they just don’t happen that often and aren’t that practical. It makes more sense—financially and artistically—to play Europe in rooms of hundreds and sometimes thousands of people in which “you can hear a pin drop.” And, you know, for a tightrope walker, environment is everything.

Cultural difference between continents? Too much competing for our attention here? Who knows why some of us haven’t heard of Grey Reverend yet. Good thing for us we can find his music just about anywhere on the web. His is a healing kind of balm made of the timeless shine that has lit up humanity’s ears and minds since the first note was sung and the first string plucked.

Ssssh. Quiet in the back. This is going to be good.

Listen to a track from Grey Reverend below!