Growing up in Valley Stream, filmmaker and actor Edward Burns didn’t have celluloid dreams. He had hoop dreams. Rather than spending countless hours in the dark in front of a flickering screen, the future director spent much of his time shooting baskets.

“I was a basketball junkie,” says Burns, whose first movie was the surprise 1995 hit The Brothers McMullen, set on Long Island. His latest, the well-received Newlyweds, is also a small budget indie film, although this one is set in Tribeca, where he now lives with his supermodel wife Christy Turlington and their two children, Grace, 8, and Finn, 6.

“I played basketball four to eight hours a day,” he says of his time first at Chaminade, the highly regarded Catholic school in Mineola, followed by two years at Hewlett High School (which is coed, the main reason he switched, he says). “I thought I would play in the NBA.” But by junior year, Burns realized that, despite being 6’2”, it wasn’t going to happen.

“Then I got started being interested in writing,” he says. After graduating, Burns briefly attended SUNY Oneonta and then went to SUNY Albany with the intent of majoring in English. “I thought I’d be a novelist, or, if that didn’t work out, maybe go into journalism.” He wasn’t the most serious of students. Burns took his first film class at Albany, he admits, because “I heard it was an easy A.” It turned out to be more than that.

He eventually transferred to Hunter College in Manhattan to study film. “I took every film course they had. After two years, there were no more film classes for me to take,” Burns says. Without graduating, he left for his first job, as a production assistant at Channel 5. A later gig, doing the same work for Entertainment Tonight, changed everything. 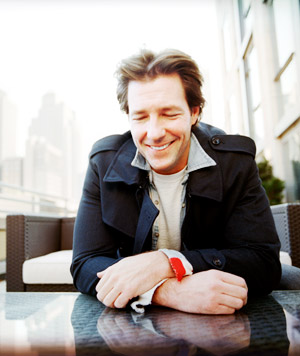 Burns started writing his first film The Brothers McMullen in 1993 and shot it in and around his family home in Valley Stream. The job at Entertainment Tonight made it possible to slip a copy of the film into the hands of Robert Redford, who accepted it for his Sundance Film Festival in 1995. It won the Grand Jury Prize, Twentieth Century Fox picked up the film for distribution and it grossed more than $10 million. Not bad for a movie that cost about $25,000 to make. It became the most profitable film of 1995—a slam-dunk for Burns his first time out.

At 44, he’s written, directed and starred in 10 films—most of which he co-produced. Burns is also credited with making the first feature film to premiere exclusively on iTunes, 2007’s Purple Violets. But he is also famous for acting in high-profile films from other directors, including Saving Private Ryan, 15 Minutes, this year’s Man on a Ledge and Friends with Kids, and the upcoming Alex Cross. Most of these are big-ticket films. In contrast, Burns’ personal projects tend to be either low budget or extremely low budget. His second feature, She’s the One, cost $3 million and co-starred Cameron Diaz and Jennifer Aniston. He brought in Newlyweds at an astonishingly low $9,000.

In Newlyweds, Burns plays a recently married man grappling with the strains placed on his relationship by a surprise visit from his trouble-making younger sister and by the breakup of the long marriage between his wife’s sister and her husband.

During a visit earlier this year to Cinema Arts Centre in Huntington to discuss Newlyweds—now available for download, viewing on demand and on DVD—Burns revealed that, as he was writing the script, he used Twitter to poll his fans about what caused the first big fight in their marriages. “Nine out of ten times it involved a family member,” he says. He also used the internet to help him select the movie’s poster and a song.

Burns’ inspiration for the plot came partly from a toast he heard someone give for a couple’s 10th anniversary: “You know what? If this ended today, in this day and age, I think you could call it a success.” He thought the sentiment both true and sad, and it became a keystone line in his film.

Newlyweds’ $9,000 budget garnered significant media attention, but Burns has learned a trick or two about public relations. If pressed, he will mention that the total cost—including such post-production chores as editing, sound mixing, color correcting and getting the movie onto high quality tape—is really $125,000.

Burns kept costs down by having the actors, most of whom he already knew, wear their own clothes and do their own hair and makeup. He filmed frugally, over a mere 12 days, in a friend’s apartment, the gym where he works out (his character is a trainer) and his favorite Tribeca restaurants. He had to pay his actors ($5,000) and feed them ($2,000) according to union rules and purchase insurance ($2,000). But he needed only three crewmembers—his camera, which cost $3,000, used available light, thus eliminating lighting costs, and the actors wore small microphones hidden in their clothes, so booms were unnecessary.

Newlyweds employs a semi-documentary style, with the actors periodically speaking directly to the camera. Burns used a similar style in Sidewalks of New York (2001) about the lives, marriages and affairs of six New Yorkers. Burns says he had that ensemble film in mind when he started making this new one as a companion piece.

He’s thinking he’ll need a larger budget for the film he’s writing now, tentatively titled The Fitzgeralds’ Family Christmas. It won’t be a “microbudget” production, Burns says, though he’s not sure how big he’ll go.

Of all his roles—writer, director and actor (the order he puts them in)—the one Burns cherishes most is the one at the top of his list. “My first love was always writing. I try to write every day. If I had to drop the others, I would hold on to writing… I have a great office space where I can set aside a few hours in the day and really focus without being interrupted by phone calls or emails. A day when I don’t write feels incomplete to me.”

But does he still love basketball? Yes, he does, which is what you might expect, not just from a former high school player with big dreams, but from any of the down-to-earth guys he plays on film.