Wes Anderson burst onto cinema screens with the bold one-two punch of Bottle Rocket (1996) and Rushmore (1998). Both movies use an exuberant “let’s-put-on-a-show” aesthetic to explore the fuzzy line between childhood and adulthood in a playful manner that is self-reflexively mirrored in Rushmore’s depiction of high school productions of classic movies like Apocalypse Now. In subsequent films (The Royal Tenenbaums, The Life Aquatic, The Darjeeling Limited), Anderson used his now-trademark blend of irony and deadpan slapstick, to focus on family dysfunction with steadily diminishing results. His animated adaptation of Roald Dahl’s The Fantastic Mr. Fox seemed to revive Anderson’s cinematic spirits, and now he returns with one of the best movies of his career.

Moonrise Kingdom is an epic, romantic, fairy tale adventure about two kids who run away together into the wilderness, filmed in the mock-heroic style of a children’s storybook or school play. The year is 1965, and New Penzance Island is a quiet place, at least until young lovebirds Sam Shakusky and Suzy Bishop take to the woods together just as the storm of the century bears down on the island. Sam’s fellow Khaki Scouts, led by the dedicated Scout Master Ward (Edward Norton), join forces with the melancholy Captain Sharp (Bruce Willis), Suzy’s unhappy parents (Bill Murray and Frances McDormand), and the malevolent Social Services (Tilda Swinton) in pursuit of the young lovers. The excellent cast also includes Jason Schwartzman and Harvey Keitel, but newcomers Kara Hayward and Jared Gilman steal the movie. Although Moonrise Kingdom is delightfully infused with Anderson’s usual dry wit, it is surprisingly earnest, heartfelt and lovely. 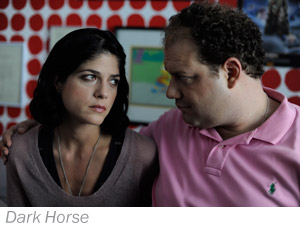 Many comedians have noted that great comedy is almost always rooted in embarrassment, guilt and disaster. After all, it’s just not that funny when everything goes right. However, few have taken this concept to the extremes of Todd Solondz. His hilarious but devastating films ruthlessly lay bare the stunning layers of cruelty that can drive human behavior. In brilliant films like Happiness and Welcome to the Dollhouse, Solondz made audiences alternately laugh and cringe at his shocking tales of betrayal, failure and humiliation. His new film, Dark Horse, tells the story of Abe Wertheimer (Jordan Gelber), an overweight, socially-inept Jewish Long Islander in his thirties who still lives with his parents (Christopher Walken and Mia Farrow). Abe is on the staff of his father’s real estate business, but rarely does much actual work. His life takes an apparent turn for the better when he meets wafer-thin, terminally depressed Miranda (Selma Blair) and they begin a typically desperate Solondz relationship. “I want to want you,” she explains. “That’s enough for me,” he responds. Of course, joy is always fleeting in Solondz’s malign universe, and Abe’s life is soon spinning out of control. Solondz challenges viewers by intermingling Abe’s hallucinations into the narrative without any clue other than that they are slightly stranger than Abe’s already absurd “reality.” In characteristic Solondz fashion, Dark Horse builds to a powerful finale that is both hysterically funny and deeply tragic.