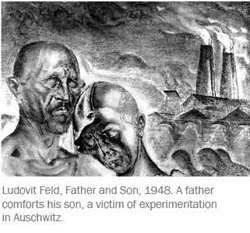 The Holocaust Memorial & Tolerance Center of Nassau County is displaying Holocaust art in Ludovit Feld, the Little Giant: Artist, Rescuer, and Auschwitz Survivor through June 30. This premier American exhibition of work by Feld, a Slovakian artist who was enslaved by Nazi “Angel of Death” Josef Mengele at Auschwitz and used for medical experiments because he was a dwarf. Among the work on view for the first time in America is a collection of 12 never-before-seen drawings, including one of only two existing pieces drawn during Feld’s short time in the ghetto. The artist is credited with saving several children from Mengele before the Soviet Army finally liberated him in early 1945.