In case you haven’t noticed, summer is here. It’s time to twist on your gingham-patterned bib, break out the wetnaps and take part in the sloppy afternoons that are part of America’s most celebrated tradition: The backyard barbeque.

Long Island may be a few states too far north of the barbeque belt to claim any part of the heritage, but we have something going for our suburban, metro-NY melting pot that will not disappoint your jonesing for a glutinous, oily-fingered, pants-unbuttoning, post-feast bliss. We have international cuisine, as authentic as the hyphenated Americans who bring them to you courtesy the region’s top restaurants.
Each year, we trudge from chargrill to smokehouse to sister-in-law’s backyard, overwhelmed (a little terrified) of the ubiquitous salty hot dog. Traditions have their merit, but Jesus, man, this is your chance for a little small-time adventure. Consider the spatula your compass and point it toward something a bit more worldly. To help navigate, a few of the Island’s top culinary experts have offered their own favorites of international fare…

There’s a shared sentiment among many that nachos can be tossed together by even the most artless of chefs. Well, the majority might be mistaken on this one, as creating this Mexican favorite depends upon knowing the finer ingredients. First, it’s vital that the tortilla chips are homemade, no exceptions. It’s simple, inexpensive and requires only some light frying of tortilla wedges. Executive Chef Scott Wojcik of Besito opts for the blue corn chip for aesthetic purposes. “The color pops when placed beside the white cheese. Sure, the flavor is similar, but it just looks better.” To further enhance presentation, place a fresh banana leaf in a pan where you can add the first layer of chips followed by all the toppings, which includes grated Chihuahua cheese, chopped chorizo, whole black beans, pickled jalapeños and Mexican crema.

Chihuahua is this toque’s cheese of choice because of its creamy texture and mild flavor (think Monterey Jack, only mellower). “Don’t skimp with the cheese. The better the cheese, the better it’ll melt. It’ll be gooey and delicious, trust me. And as an alternative you can use Monterey Jack or even Gouda.” The whole black beans are added to preserve the tradition of the nacho dish.

“We want to keep it realistic. They are nachos after all,” he laughs. On the other hand, Wojcik says the chorizo—made of fresh ground pork, garlic, chili, allspice, cinnamon and some other spices—is what makes it distinct. “If you can’t make homemade chorizo then make sure you get quality products from a trusted vendor. Choose your ingredients wisely; it makes all the difference.”

Repeat this layering process again by adding a second run of chips and toppings. Place the tray in the oven at 450° F and wait for the cheese to melt, which should take about five minutes. When it’s done immediately add pico de gallo and crema, and serve. “You need the cheese to stay gooey and fresh, so serve it as soon as it’s out of the oven.”

Pisco Sour
Whether the Chileans or the Peruvians invented this frothy, creamy, limey drink is still up for international debate. But what won’t be arguable is the smile you’ll be flashing after a few of these.

Preparation
In a blender, whirl three ice cubes, pisco, sugar, fresh lime juice and egg whites. Twirl until smooth and serve straight up in a martini glass with a dash of aromatic bitters and a wedge of lime.

TIPS:
1. Pico de gallo should be made fresh that day: Diced beefsteak plum tomato, onion, cilantro, jalapeño and lime juice.
2. Top with crema (Mexican version of sour cream) because it holds up to heat better and won’t separate.

CEVICHE,
according to La Candela, Hicksville

This traditional South American dish is a cool summer fix that requires only raw fish and a citrus marinade. The real lure of this dish is that there’s no cooking involved. And according to Carlos Biño, the chef at La Candela, “Ceviche is easy. It’s lemon, salt, spices, garlic. It’s easy.” Basically, the marinade “cooks” the protein just as your oven might.

TIPS:
Cut the fish into small pieces so the acid is absorbed fully and faster.
Add some onions, garlic or chili peppers to soften the acidic nature of the mixture.
The flesh will go from a glowing gray to a firm pink-white.
There are no constraints as to how long you let the fish steep (a few minutes up to an hour) but five hours is way too long. You want your fish to be fresh.

Lamb roasted on a spit is an age-old Greek tradition that requires no more than amateur skill and a little inspiration. Size is the prime indicator of a good cut of meat—the smaller the cut, the younger and less gamey the lamb. Manager Ben Hoza of The Meat House says, “The younger cut, the sweeter the meat. The meat will have more fat and will be tenderer as a result. Anything over a year old is considered mutton and it’ll be tougher.”

Before putting it on the spit, apply a dry rub to the entire lamb, over every crevice. “Use garlic, rosemary, lemon, pepper and mint. The rosemary and mint cut out some of the gaminess. Also, you can mix this rub with olive oil to make a paste so it’s easier to spread on.” Another recognizable flavor to add to the rub, according to Hoza, would be lavender, as it tends to really pop.

When roasting a leg it’s essential to slow cook it for 2-3 hours on low heat. If you decide to grill chops (loin, rib or shoulder) rest it over high heat, and allow it to char a few minutes on each side until you have a crispy outside. For medium rare meat pull it off the grill when your thermometer reads 130° F. “If you cook a whole lamb, know that it’s time consuming but fun,” says Hoza. “It’ll take eight hours to cook or smoke, but when it’s done there’s nothing better.”

Thinly slice the lamb and place the meat in the center of pita bread. Top with tzatziki sauce and chopped tomatoes, and serve.

Tips:
Trim the fat as best as you can to avoid that undesirable toughness. Any reputable butcher will lean the cut for you.

Ouzo
This Greek liquorice-like aperitif gained popularity after absinthe was deemed the “devil’s drink” in the early 20th century. It’s a silkier ride than its psychedelic predecessor and it’s meant to ignite your appetite before a meal. Serve either chilled or with a splash of water, which leaves it looking milky white (it’s not spit).

Drink with a “fatty” snack like feta cheese or fried zucchini to help absorb the high alcohol content. Make sure you don’t skip that nosh, because after a few of these down the hatch you’ll wonder why the f*%k the ground is moving. 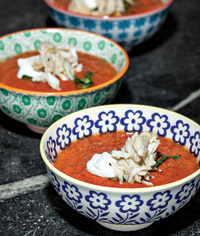 Chef/Owner Elmer Rubio insists you use the heirloom tomato because of its sweeter, less acidic nature. “Look for a red ripe tomato. And we like to add in a poblano pepper and a chipotle pepper to add a nice smoky taste. I think that’s what’ll make your soup a little different and give it that extra kick.”

Combine all ingredients and blend it down to a purée. After it’s completely smooth, add some pure virgin olive oil and rice vinegar as a dressing. “You want to put it in the refrigerator overnight so the ingredients combine and cool down. The longest you should keep the soup in there is for three days.”

When you’re ready to serve, add a dollop of crabmeat, chopped basil and some sour cream to finish the dish. “The crab complements the dish perfectly. We even like to make soft shell crabs here and serve it with a gazpacho dipping sauce. Your guests will love it.”

TIPS:
Gazpacho should be served chilled, not iced.
Put the tomatoes through a sieve to eliminate seeds in the finished dish. Chill the bowl in the refrigerator. 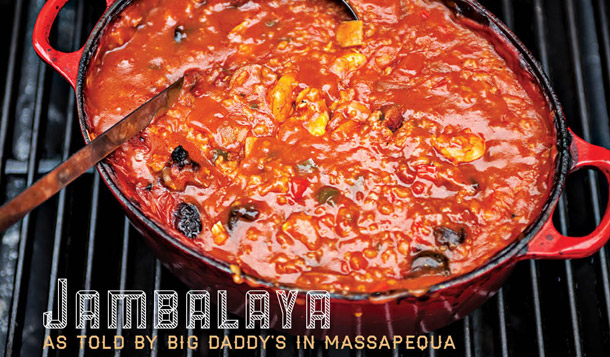 Jambalaya
As told by Big Daddy’s in Massapequa

This New Orleans barbeque-style “stew” originated in the Caribbean islands. Known for its spice and simplicity, according to Craig Bedell, Head Chef at Big Daddy’s, “You really can’t mess up this dish. It’s like how Italians make their sauce; it’s all a matter of personal taste.” Drawing inspiration from Spain’s paella, Jambalaya is traditionally made of four parts: Smoked meats and fish, vegetables finished with a seafood (or chicken) stock and rice.

Bedell says the most important aspect of putting together this dish is using quality meats and ingredients. First, put the medley of vegetables into a buttered pot. “It’s made up of garlic, onions, peppers and celery. Make sure the vegetables are translucent before you add in the rest of the ingredients.” And there are a variety of smoked meats to choose from (basically, whatever meat you want), but for his recipes Bedell likes to include andouille sausage, boneless chicken thighs and ham. The meat is added to vegetables, braised over high heat and then reduced to simmer for a few hours. “When the chicken thighs start to break apart you know you’re ready to move on.”

At this point you want to add peeled plum tomatoes, white wine, fresh ground pepper, habañero, chili powder, cumin, oregano, parsley and hot sauce, and let it stew for another 10 or 15 minutes. Next add the crawfish tails, shrimp and seafood stock, which is brought to a boil and then left to simmer for another hour. Fold in the rice and stir occasionally.

JAMAICAN RUM PUNCH
For this “lethal” punch, the old saying goes: “One of sour, two of sweet, three of strong, four of weak.” I’ll take five or ten of these, and please don’t expect me to utter an ounce of sense by night’s end.

Mix all the ingredients in a big bowl until the syrup and honey are blended with the other ingredients, then serve over ice.

Tips:
Use leftover meats of any kind: Roast chicken, brisket, even alligator—if you have it.

Brine the meat overnight with sugar and salt before you smoke it. If you can’t smoke the meat at home, go to a reputable smokehouse. 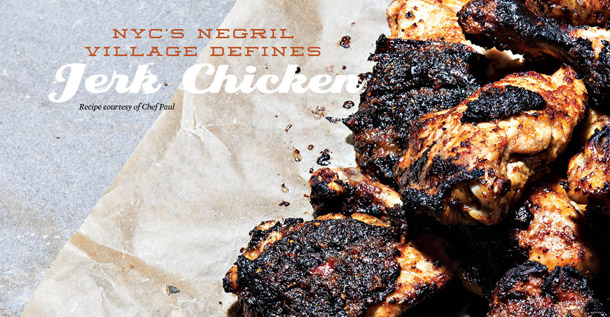 You will need the following ingredients to to to prepare jerk chicken for 4 people:

Preparation
Chop the onions, garlic and peppers. These do not need to be chopped too fine, as the blender will liquefy them.

Combine all ingredients (excluding the chicken) in a blender to make the jerk sauce.

Rub sauce into the meat, saving some for basting and dipping later. Leave the chicken in the refrigerator to marinate overnight.

Cooking
Grill the meat slowly until cooked, turning regularly. Baste with some of the remaining marinade while cooking. For best results, cook on a charcoal barbeque (ideally over a rack of pimento wood).

Use a wooden spoon (or something similar) to hold the chicken in place while chopping, and be careful, you will be chopping with enough pressure to cut through bone!
** Serve with festival dumplings and salad or rice and peas, or hard bread and the jerk sauce leftover for dipping. **

Hurricane:
The only way to indulge in a Hurricane is if it’s bright red and served in a tall “hurricane lamp” shaped glass, decked with cherries and orange slices. And be careful: This sugary drink might go down easy but it packs a category-5 punch that will have you spinning.