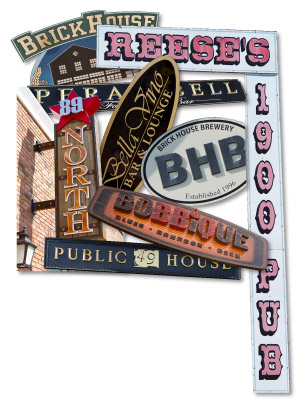 By now you’ve been hearing so much about this town—on our pages and elsewhere—it’s a little embarrassing to have to tell you anything at all. But, for the record…

This is a town that knows how to keep its secrets, which makes it the perfect place to let your hair down. For music lovers, it has become the official live music mecca. Bobbique (blues), BrickHouse (local), the newly installed 89 North (so far, singer-songwriter), Public House 49 (covers) and Pera Bell (you name it, they play it) all feature great musicians every night of the week. Even Roast, the coffee shop, is known to host open mics for acoustic types. Patchogue Theatre’s informal Live in the Lobby series is exactly what it sounds like. If you’re the dinner and a movie type, Lombardi’s On The Bay is the upper crust of big Italian and Plaza is your art house cinema and media center. For something a little quieter and possibly a touch more intimate, try Bella Vino wine, cheese and martini bar. And of course, the high holy, Reese’s 1900 is a good place to start the night by loading up on the 55mph chili.

Hint: Come on a Friday night when Alive After 5 is on. It’s a street fair that shuts down Main Street for the sake of live stages, pours from Blue Point Brewing Company, exhibits and so much more. If you’re really lucky, you’ll be around July 13-15 when The Great South Bay Music Festival returns, the Island’s version of Bonnaroo or Coachella. The town’s slogan pretty much sums it up: Everything is waiting for you. If you come by during the week, visit Pulse at its headquarters just off Main Street. No reservations, no plans. Just go with it.

Babylon has one of the most celebrated “walking downtowns” day or night. Like much of the Island, this village is well entrenched in the restaurant culture some follow like religion. In addition to finding chic cocktails, you could practically travel the world over the course of a weekend by eating here. Kotobuki has been serving since 1987 in a smallish restaurant with honest fresh-as-can-be sushi and sashimi. Ristorante Gemelli has been anchored since 1997, offering authentic Italian (the market of the same name has been here since ‘88). Holding true to its post-Civil War era construction and lively sense of community, the Babylon Carriage House is where to go for dinner and then some (heavy on the “then some”). Barrique Kitchen & Wine Bar is only a few years young, but operates like a veteran. Installed just this past February, Monsoon Asian Kitchen and Lounge fuses the cuisine of the East with the modern, stylish lounge atmosphere favored in all big cities. Finding yourself here by day won’t disappoint either. Start at Glen’s Dinette for the ultimate in breakfast. Continue to a handful of boutiques that will sate your retail urges, and the parks, beaches, movie house, day spas and sports bar will fill the in-betweens.

The Babylon Express, made with Crop cucumber vodka, St. Germain, pineapple juice and fresh lime juice, it’s fresh and tangy, just like the town its named after. Find it at Monsoon. photo by Jim Lennon

“The Village of Babylon is a very tight-knit community that welcomes newcomers while simultaneously embracing those who have been residents here for years. Practically, I love that you can walk the entire village in a few hours.”
Michael Bohlsen, Bohlsen Restaurant Group, Babylon resident for 13 years.

On the outside, Port Jeff is a sleepy salt of a town with little happening. But don’t judge a book by its cover. The winding New England-like construction of this hamlet has many a worthy site tucked away. You’ll find them easily enough. Suggested Sunday morning: Start at La Bonne Boulangerie and stock up on all-natural homemade breads to die for, gallons of coffee and the newspaper. Stay on their front porch or cross the street to take in the view. 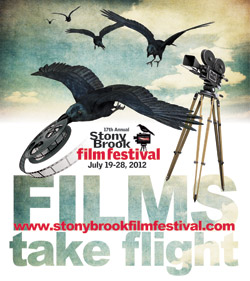 What do you do in Stony Brook besides visit the Staller Center on the university’s campus? The Village Center has no shortage of activities for any age. Take cooking classes with LI super chef Guy Reuge (of Mirabelle fame), attend exhibits and live performances reenacting days of yore, visit historic landmarks, take guided nature cruises through the wetlands and visit The Long Island Museum of American Art, History & Carriages. This last one is often considered a crown jewel and the name tells you what to expect. And what of that Staller Center for the Arts? The Stony Brook Film Festival runs July 19-28 and has drawn the likes of artsy hipsters, including Steve Buscemi, Mary Stuart Masterson, Alan Alda, Ralph Macchio, Christopher Plummer and Eli Wallach. That’s not all they’ve got. See live performances by Colin Quinn, Spanish singing sensation Buika, Emerson String Quartet, Shaolin Warriors (yes, badass martial arts), kids programs, dance and Acrobats of Cirque-tacular. Visual arts in the gallery never disappoint, nor do the conversations at the bar (or at Pentimento Restaurant in town afterward). stallercenter.com.

Laid back, understated Northport Village got its rep as a writer’s village starting in the 50s when Jack Kerouac was regularly passing out on Main St. Gunther’s, Jack’s favored watering hole, remains today and still draws the working crowd the writer was so fond of, as well as current writers, musicians and artists. A stroll through the quaint village reveals a few choice shops and eateries, including The Window Shop for jewelry and Maroni for first rate Italian (if you can get in). Part of the illicit gin-running past of Prohibition days lives here—and if you’re lucky, you’ll uncover one of the secret passageways. Take note: John W. Engeman Theater is showing 42nd Street through June 17. Oh, and absolutely breathtaking sunsets can be found in the park along Bayview Ave, made all the better by treats from Copenhagen Bakery.