Amateurs teach amateurs to be amateurs. So rather than listening to Uncle Ernie’s latest advice on the slice or trotting over to the nearest club-fitting guru to purchase more length and less width, maybe a visit to your local PGA pro for a realistic look at your golf game is more worthwhile. At Mount Sinai’s picturesque Willow Creek Golf & Country Club, head professional Larry Scortichini explains how a teaching pro builds lesson plans for beginners or students looking to shake off the rust after an extended period of inactivity.

“It starts with a lot of questions,” says Scortichini, who played baseball at Dowling College before becoming a golf pro. “I ask so many questions I probably annoy them. They want to start hitting balls right away. The first one is: Do you have any injuries? Most people say they don’t and then they think about it and realize that, yeah, they do. So I’m looking for limitations, what certain body parts can or can’t do anymore.”

Any physical issue can lead to poor mechanics. “I ask them how they want to play the ball—left to right or right to left, or straight. I ask about their frequent ball flight errors. Then I ask how much change they are willing to attempt. You sometimes have to get worse to get better.” Scortichini warns that rebuilding a swing from scratch can ruin a summer for a golfer on the way to lower scores. Are they willing to suffer like that? He needs to know. “I don’t mess with their backswings much. At the end it’s all about a squared-up clubface striking the ball on the sweet spot. How a golfer takes the club back or gets there is not so important.”

Finally, Scortichini tells the student to warm up and pretend he’s not there. “I watch them hit balls and see where they are inconsistent. It’s usually caused by something physical. Most pros warm up with the short clubs first, making little swings, working through the bag to the driver. Lots of amateurs pull out the driver right away.”

Titleist Performance Institute has a performance test, a series of exercises without a golf club that accurately predict golf ability. Squats, toe touching, back stretches, things that are no problem for kids unless their hamstrings are too tight from too much time sitting at a computer—things that can be improved with effort.

“Then we go over the grip, stance, alignment, ball-position, aim. Most golfers have at least one fault here, which leads to all the others. We develop a pre-shot routine. The golf swing begins with a solid connection to the ground, so I tell golfers to try to feel heavier, more settled, like no one could knock them over.”

Most amateurs want to hit a draw, Scortichini explains. A draw rolls out longer and provides more distance off the tee, but long and left is where most course designers plant their obstacles, the bunkers and ponds and mounds and willow trees that lead to double-bogeys. “You want good distance in the air and the ability to stop the ball, some control,” Scortichini says. “You want to hit a fade. I base my game on a fade. But everybody must have one go-to shot they know they can trust, the one they know they can hit under pressure.”

Once a golfer has substantially improved his physical ability, it’s time to spend money on equipment that fits the new swing. “And fit everything then, all the clubs, even the wedges. Not much has changed in golf instruction over the years, but the equipment is so much better. If you live in the northeast though, you don’t need to pound balls all winter. You’d be better off doing golf-specific exercises. Squats. Stretches. Improving hand strength.”

Scortichini plays Titleist woods and irons. He carries a driver, 3-wood, two utility woods and three wedges. His putter is either a Scotty Cameron or a TaylorMade, depending on how they look to him that day. “If you have confidence in your putter it doesn’t matter what you use.”

Even Scortichini sees a golf professional for a tune-up from time to time. “Everybody needs another set of eyes on their swing now and then. Playing lessons tend to be about course management and short-game techniques. Most people would benefit. They would learn to play within themselves, to not expect to hit a career shot every time, and plan accordingly.” 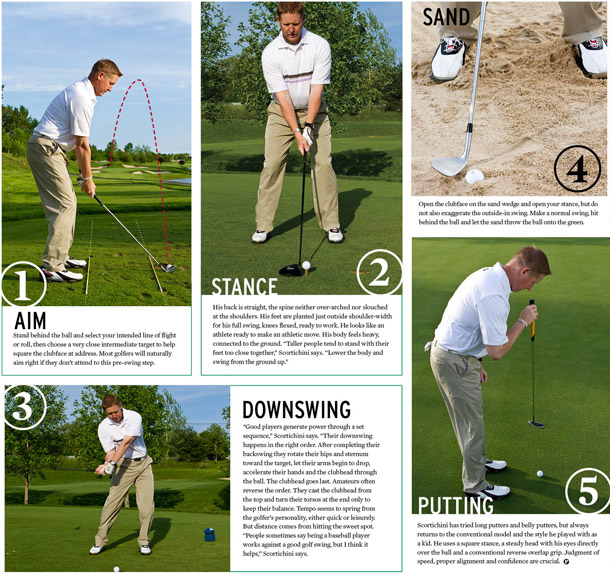 1. AIM
Stand behind the ball and select your intended line of flight or roll, then choose a very close intermediate target to help square the clubface at address. Most golfers will naturally aim right if they don’t attend to this pre-swing step.

2. STANCE
His back is straight, the spine neither over-arched nor slouched at the shoulders. His feet are planted just outside shoulder-width for his full swing, knees flexed, ready to work. He looks like an athlete ready to make an athletic move. His body feels heavy, connected to the ground. “Taller people tend to stand with their feet too close together,” Scortichini says. “Lower the body and swing from the ground up.”

3. DOWNSWING
“Good players generate power through a set sequence,” Scortichini says. “Their downswing happens in the right order. After completing their backswing they rotate their hips and sternum toward the target, let their arms begin to drop, accelerate their hands and the clubhead through the ball. The clubhead goes last. Amateurs often reverse the order. They cast the clubhead from the top and turn their torsos at the end only to keep their balance. Tempo seems to spring from the golfer’s personality, either quick or leisurely. But distance comes from hitting the sweet spot. “People sometimes say being a baseball player works against a good golf swing, but I think it helps,” Scortichini says.

4. SAND
Open the clubface on the sand wedge and open your stance, but do not also exaggerate the outside-in swing. Make a normal swing, hit behind the ball and let the sand throw the ball onto the green.

5. PUTTING
Scortichini has tried long putters and belly putters, but always returns to the conventional model and the style he played with as a kid. He uses a square stance, a steady head with his eyes directly over the ball and a conventional reverse overlap grip. Judgment of speed, proper alignment and confidence are crucial.