With a spot on the newly-released Music for Occupy album set (featuring Willie Nelson, Yo La Tengo, Debbie Harry and a boatload of other superstars), a creepily-good minimalist remix of their song “Big Little Wolfs” by author Rick Moody, and lots of digital noise around a few artful videos, things are looking good for Aeroplane Pageant. In a way, things have always looked good for Aeroplane Pageant. When I was introduced to them via a friend at work several years ago, they were only around a short time and already playing The Knitting Factory and other big stages around New York City. Bloggers loved them, as did a few choice radio stations. There was something urgent about their music, something transformative and restless. And while that first record, Wave to the Moon, was, perhaps, searching for a sound, it revealed a band rife with innovation, craftsmanship and integrity. Then came Even the Kids Don’t Believe Me followed by 2011’s Float Above the Yard (all self-released), the latter providing the impetus for some serious chatter going on right now about how good this band really is and can be if it continues to grow as it has grown since its formation.

Let’s start off by saying Aeroplane Pageant is to their contemporaries in indie rock what U2’s seminal 1991 release Achtung Baby was to the entire U2 catalogue that came before it. Weird, I know, but stay with me for a second. I don’t use this (old) SAT-type analogy because Aeroplane Pageant sounds a lot like U2 (they don’t). I don’t use it because I am a huge U2 fan (I am). I don’t even use it because Brian Kelly, front person for the band and arguably the principal designer for its pageantry, is an educator by day (he is) and a (anti-) rock star/filmmaker/essayist (for this magazine, by the way) by night. No, I don’t make it for any of the above reasons. I make it because I happened to have had a rather memorable and inspired conversation about all things U2 with Aeroplane Pageant bass player Tim Watson (a super-friendly and kind gent) not too long ago at a little bar in Wantagh off of Sunrise Highway they’ve frequented over the years. We discussed the spirit of invention that was present in that specific moment for U2 and how it was so different from anything the band had done before it. That spirit of invention is the same spunk present in Aeroplane Pageant (on a smaller scale, of course…Zoo TV?) and too often missing from the indie rock landscape today. And that’s precisely the point I think I’m trying to make here. This Long Island-based band who has one foot in the zany hipsterish Brooklyn scene and one foot completely outside of it will surprise you by not only what it sounds like but also what it listens to, what it reads, and how it thinks. Refreshing, isn’t it?

So if Aeroplane Pageant doesn’t sound like U2, what does it sound like, Alan? This, of course, is a relatively dumb question to ask myself, but a necessary one, I suppose, if I’m to introduce this band to new listeners. I hear imprints of Lennon and Lou Reed, but I also hear the lo-fi bounce of early Modest Mouse. There’s a lot in there that’s contemporary too—Rogue Wave and, oh, I don’t know, maybe Bear Hands? The Dodos? So many animals these days making their way into indie rock nomenclature it’s hard to tell them apart. When asked about influences, Brian responds by naming three seminal bands I can’t believe I missed: Guided By Voices, Flaming Lips and Velvet Underground (I sort of got one). And when I ask for nonmusical stuff, he gives me John Ashbery, Barry Hannah and Francis Bacon. An esoteric (and brilliant, I need to add) New York Language poet, a fiction writer from Mississippi (whose work I don’t know well) and an early 17th century English philosopher (a viscount, no less). At some point during the process of gathering my notes for this little essay, I start getting a clearer picture of what’s going on.

The thing that separates Aeroplane Pageant from other indie rockers and makes them more appealing is not entirely clear to me, but what is clear is that it has something to do with the fact that the band is not simply about making music in some kind of conventional way or to get signed or any other antiquated idea of what it means to be a musician. They live and exist in a world of work and responsibilities and addictions and vulnerabilities. They’re human, and they shape the matter of that very human world into stimulating aural aesthetic whose purpose is to make sense of the world and to share this sensibility with others. Kelly’s lyrics are abstract little paintings, nonfigurative but suggestive, without discernable form at times, but resonant nevertheless. I see a few repeated targets for his musing. One that seems to come up often, especially on the newest release, is a surreal yet thoughtful commentary on suburban life. Rousseau’s idea of “mind-forged manacles” comes to mind. There’s a Romantic inclination (to roar? to fly?) in Aeroplane Pageant, that’s for sure, but it’s often paired with a cryptic sense of doom if we don’t transgress. “Streets peopled with that matching worn face,” Kelly sings on “Help Me Shoot This Apple Off My Head.” He follows with “No one wants a heart that’s buried with hate / Help me see some other side.” There’s a refrain for wanting “more light,” and that’s just it. The band makes music to understand what it and we need. And it does this in the least pedantic way possible because we’re bouncing and musing and smiling at the profundity. Music for smart people? Maybe. Music for real people? That’s probably more like it.

My hope is that you’ll spend some time with Aeroplane Pageant today and that maybe that time might prompt you to spend some more time with them tomorrow and then again the day after that. Ultimately, the time you spend will be worth it, and together we can have a conversation about the kind of sound that matters in the shifting landscape of modern music. Here’s one band that has a lot to say on the topic. 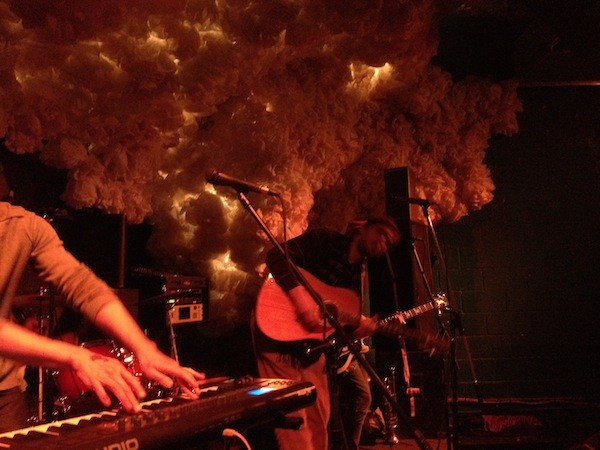