Some guys have all the luck. [Take one] Reclined upon a massage table in a dimly-lit spa, swabbed head-to-toe in seaweedy goop, then mummy-wrapped in a healing tinfoil sarcophagus. [Take two] Dribbling across a basketball court, lofting hook shots against a sweet marine breeze on the upper deck of a cruise ship that couldn’t squeeze into Yankee Stadium. [Take three] Wedding-style gourmet banquet shenanigans, again.

My luxury supertanker for the week, the Sea Princess, is touring the incomparable Alaskan Gulf and Inside Passage. The sailing week of a two-week land and sea tour that first railed and bused overland from Fairbanks to Seward, Alaska, then cruised to Vancouver. I inhabited a “state room” with a balcony, wherefore, while reclining in bed, a slight tilt of my pillow-propped head transformed my view from a Knicks playoff game to a promenade of glacially enchanted mountains gracefully gliding past my open sliding-glass door. 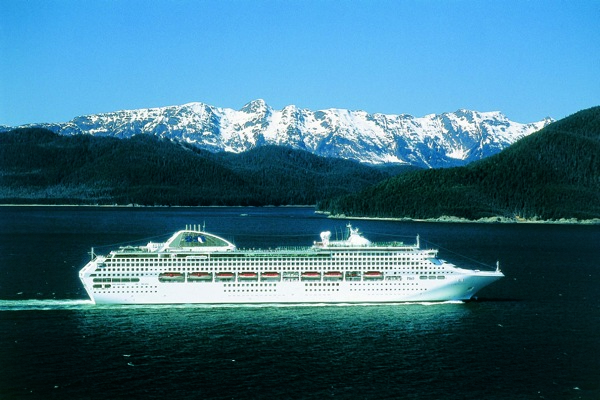 Hither to, I proclaimed that the cash tendered cruising could be budgeted for months of gallivanting through India or Indonesia, where daily beach massages, laundry service and grass-domed beach-hut sunset cocktails are within means. But this is a float through Alaska, with port visits in Skagway, Juneau, and Ketchikan—whose surprisingly mild climate parallels Boston’s, year-round. The port calls provide remarkable opportunities to whitewater raft, ride antique trains up steep mountainsides, helicopter or small plane flightsee over or onto glaciers, and tour village tavern life.

Although Helicopter flight seeing tours—many of which land upon remote glaciers—create environmental problems (i.e., noise and air pollution), it’s the opportunity of a lifetime for a one vacation per year family to visit wilderness. Every one of the helicopter and small plane pilots I flew with kept their distance to avoid startling wildlife. Land tours include whitewater rafting with authentic, down to earth guides on the Kenai River and late June “combat” salmon fishing, where the riverbank crowd resembles Times Square at lunchtime.

This was no hipster singles foray. How does a single, backpacker-indoctrinated, fortyish travel writer hit holiday stride on a cruise that’s bursting at the seams with fifty-plus twosomes savoring the vacation of a lifetime? A recovering Manhattanite accustomed to on-demand tomfoolery, I partook in the dazzling continuum of activities (one of them slightly illegal), befriended crew musicians, and binged on soup.

Legal activities include mingling in the disco, lounging in two piano bars, rapidly ingesting soft ice cream, shuffleboard, a shopping mall-sized movie theater, a jogging track around the ship’s perimeter, ping pong, on-deck pools and Jacuzzis, a blues music tavern, off-Broadway worthy musicals, nature lectures by US Park Service employees, and all night buffet snacking. Though I’m not sure if it was officially sanctioned by the ship, an amateur video camera convention was also underway. Throngs of crusiewear-clad men zooming, panning, and reeling their videocams about the vessel as if they were indispensable to their vision. Invariably, two filmmaker journeymen would discover one another, index the milestone, then pan away.

I unearthed the passenger-forbidden crew bar, a lawless zone where if you encounter barroom disquiet, your case will be judged under Liberian law. (Liberia is Africa’s floundering attempt at a slave repatriation country, and one of the most corrupt governments on earth). Registering cruise ships in Liberia is a bargain. The literally underwater crew bar is a smoke-fogged, window-free, steel-hulled, army baseish joint, workingman’s hangout where the musicians, cooks, beauticians, maids and Cartier peddlers mingle in thick smoke and 1950’s Wisconsin beer prices. The crew make up one-third of the 3,000 people on board and this is where they let their hair down. Only a percentage of the international crew are allowed above deck into the guest zone. The trick was pretending to be one of the ship entertainers. This really is a no-no so don’t try it unless you can find a crewmember to be your accomplice. Pardon the tangent, and please note that Sea Princess is now under British registry.

Sailing south, the Canadian highlight of the cruise was a detour into Glacier Bay National Park. Seafaring visits into the park are restricted. Upon sailing into the center of the bay, the ship began pirouetting within the glacier-calving amphitheater amid Empire State Building-shaped glaciers descend down rugged valleys and creep yards per year (this adds up between ice ages). Bus-sized pieces of the glacier’s bay-fronting faces broke off every couple of minutes and crashed into the rich blue water, creating mini tidal waves that rocked the ship. The ship spun slowly, taking in a full 360-degree panoramic mountain-scape and an endless sea of floating glacial debris, many doubling as sun decks for seal and otter families.

Although no newbie, the ship is a spectacle, an urban buoy. Sea Princess is 77,000?tons, 14 stories tall and 856 feet long. She carries 1,950 passengers. The engines create a megawatt buzz that would come in handy if your city blacked out. When cruise ships of such tonnage pull into these small Alaskan coastal towns, it betokens linking a small economy to thousands of hemorrhaging wallets. The landfall buying blitz is bounty time for Stuffed Moose (Taiwan), wood-carved owls (local), Eskimo statuettes (Peru), gold rush jewelry (local) and soiled doves—the ghost of prostitutes who flocked to Skagway and other instantaneously assembled towns to accommo‘date’ nineteenth century gold seekers. 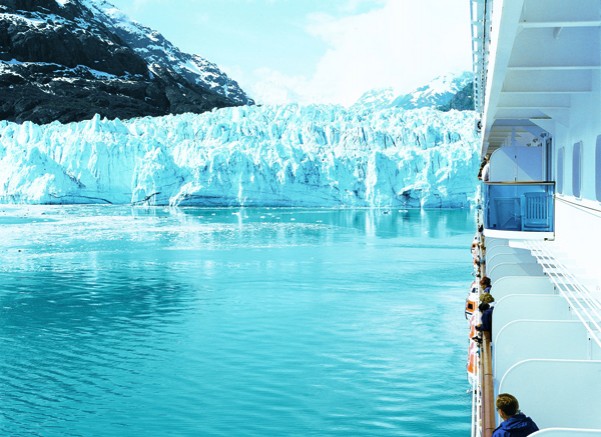 What ranks this Alaskan and Canadian cruise supreme is that nature always awaits: bald eagles as plentiful as Central Park pigeons, black bear and whales top the list. Outside Ketchikan on a tangential Misty Fjords wilderness cruise, I saw two black bears and ten eagles munching on a beached humpback. The presence of bears implies a regions’ wildness; this part of the world is one of their last holdouts. At any given moment you can step outside and take in the massive, river-like, mountain-flanked Inside Passage. The night owls gather at the stern for a chat while the early birds snooze down below.

The first week of this itinerary is land-based and savors summer light until 11pm in surprisingly mild temperatures. One highlight was the Fairbanks-Denali, Midnight Sun Express train ride: big windows, glass ceilings and beer-aplenty while railing through a series of National Geographic glossies. Another jawdropper was bus touring into Denali National Park. The driver/guide may have been a Will Rodgers reincarnate. Weather permitting, we beheld 20,000′ Mt. McKinley, which actually has a statistical edge on Everest. What separates McKinley from other glacier and snow-capped mammoths on the planet is its 18,000 rise from a 2000′ plateau. Everest rises “only” 10,000′ from the Tibetan plateau.16 of the 20 highest mountains in the U.S. are in Alaska.

The Princess lodges in Fairbanks, Denali, McKinley and Kenai maintains the elegance of high-end Colorado ski resorts without the attitude. With ample time to wander and discover the backside of our land and sea-based stopovers, I accredited my Alaska native vs. new resident theorem: is that pierce-eyeing, brew-hounding rogue over there sporting a beard, baseball cap and flannel shirt with an “I own dis town” mentality a typical native, or is that an identity crisis escaped from the lower 48? Native Alaskans, many who shave and articulate clearly, find it amusing that a fair majority of the local frontiersmen squalling in the taverns tend to have immigrated from down under within the year. Sorry rookies; snarl on.

Skagway is a touristy “gold rush” town that still manages a Wild West flavor. A long walk and two games of pool later, my Skagway helicopter excursion landed on Chillkat and Fairabee glaciers, the stunning terrain surrounding the latter resembling California’s Yosemite terminus. In fact, Yosemite preservation champion, John Muir, came to Alaska to prove his theory that Yosemite was glacially carved (it was).

Cruisers are stereotyped by backpackers, adventure travelers and other no-itinerary wanderers as soft and overfed, but the combination of relaxed simplicity and staggering natural beauty on tap is a worthy value for even budget conscious vacationers. Whether it be whales at play, screw-the-diet heaven, sipping cocktails in one of the two pools or six open-air jacuzzis, or shaking your bootie in the disco, this Love Boat is a doozy. I never cracked my book. This skeptic sailed home well fed and lofting a reinvented hook shot. Discovering a drifting city with constantly changing, epic scenery is an adventure. Montana’s Glacier National Park will soon be completely melted. There are accessible glaciers in Norway and Patagonia, though getting there is quite an undertaking.

Clanking down her gangplank for the last time, I trusted that one-in-a-hundred cruises couldn’t compete with the Alaskan Gulf and Inside Passage. If you’re not cringing every time you eyeball an ATM receipt, consider it. If the idea of an all-inclusive floating skyscraper-resort serving gourmet meals and 24-hour roof access to discover some of Northam America’s premiere scenery sounds indulging—go.

* Everyone I met on the cruise was friendly, except my next door neighbor, a smarm from Boston and the repressor of all joy. He reprimanded me in the hall for talking too fast, twice, and I wasn’t even talking to him. So at every opportunity I hung a Do Not Disturb sign on his door. He complained that his room was only made up once that week.

* In bed, I glanced away from the passing cotillion of glacier-blessed mountains and back at the Knicks game to behold an obstacle between the bed and the TV—my stomach in full bloom. Then realized, under Liberian Law, it was dinnertime.

* The Exxon Valdez was repaired in Malta (was there, saw it), renamed the Mediterranean Sea River, and attempted a return to Prince William Sound. When the word got out this tanker had returned to the scene of the crime—still without a double hull—it sailed elsewhere.