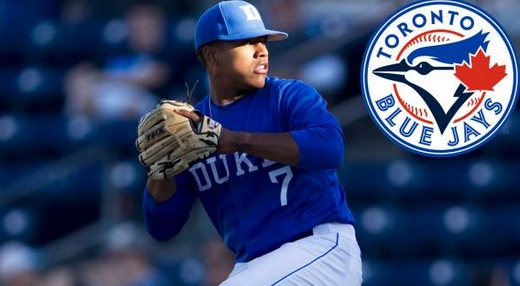 Long Island is not short of famous baseball names with natives Carl Yastrzemski and Craig Biggio leading the way. Last week another crop of young and promising talent with Island roots were selected by teams in the Major League Baseball draft.

Of course the biggest name this year is Marcus Stroman, a pitcher out of Duke, originally from Patchogue-Medford. The Toronto Blue Jays selected him with their first pick – 22nd overall – of the draft.

“It’s pretty surreal,” he said. “To be selected in the first round is an honor. It’s unbelievable to be able to experience this with my family and friends here. It was unbelievable to hear my name called. I’m definitely excited right now and can’t wait to see how everything plays out with the Blue Jays.”

At Duke, he was named a 2012 Louisville Slugger All-American, First Team All-ACC and he ranks fourth all-time in school history with 290 career strikeouts. He was equally as impressive as a high school pitcher on Long Island for the Raiders.

Tyler Manez (Plainedge) and Charles Galiano (Commack) were the only two Long Islanders selected out of high school.