In person, Coldplay hardly seem like famous rock stars who sell out stadiums worldwide. The band members can be both serious and quite funny, and when they’re together there’s definitely a little A Hard Day’s Night sense of the four lads from England. Relaxed and casually dressed, the most striking fashion accessories among them are clunky and brightly colored sneakers, worn unlaced.

When Coldplay hit the scene with their debut album Parachutes in 2000, no one could have foreseen the massive success they would achieve. They helped return UK pop to the forefront of music. Coldplay was among the first UK acts since the post-punk, new-wave explosion of the late 70s and early 80s to cross over to America, hit the charts, sell out stadiums and headline festivals. The Brit-pop scene fizzled in America in the 90s, when grunge and rap dominated—only Oasis made any noise in the US during that decade.

Coldplay, like UK acts Snow Patrol, Keane and others, possesses an uncanny knack for writing pop music with a depth of sophistication and quirkiness. They are able to take pop songs and imbue them with the muscle and grandeur of classic British rock, while appealing to the kids, their older siblings and even their baby boomer parents who grew up with The Beatles and U2. Many American pop groups tend to play to the very young but lack the ability to evolve into great album artists. Coldplay, on the other hand, continues to grow with each album.

Their second album, A Rush of Blood to the Head, released in 2002, critically and commercially broke the group wide open. The follow up, 2005’s X&Y, solidified Coldplay’s place as one of music’s most important and successful groups. And their growing fame started to haunt them. Some critics, particularly in England, labeled them as soft rock and even started calling the group Radiohead-lite or U2-lite.

Conceiving their first three albums as a trilogy, Coldplay felt a major shakeup was necessary. Often their own worst critics, the group felt they needed new ideas in the studio. Enter Brian Eno. Producer extraordinaire, Eno could help the band reach the largest possible audience and bring out their best creative instincts. He also shared the band’s distinctly British approach to life, music and art. Given Eno’s work with stadium-ready U2 and the quirky, sometimes volatile, Talking Heads, he turned out to be just what Coldplay needed. He helped them achieve the biggest recording success of their career and the result may be one of the best British rock albums of the past 30 years with Viva La Vida. The album exploded with, oddly enough, a more pop sound in spots, a cohesive concept and joyous group singing.

This is no surprise to anyone who follows Eno: His early groundbreaking career as an original member of Roxy Music, his collaborations with Robert Fripp and others, and his ambient albums put him at the vanguard of underground music in the 1970s. His equally experimental production with David Bowie, Talking Heads and U2 resulted in some of those artists’ most popular music. Given Eno’s reluctance to sit still long enough to go through the insufferable vapidity of an interview about something as trivial as “making records,” it’s a rare treat to hear a band discuss his personality and work methods in such detail.

Chris Martin, the defacto frontman, can be very goofy and chatty, but he’s clearly on a mission and wary of anyone being too probing. It’s also clear that Will Champion is more than just the drummer, but an integral part of Coldplay’s musical direction and decision making. Jonny Buckland seems to be getting stronger with each album and is quickly becoming one of the great English rock guitarists. He’s quiet and soft-spoken, but not nearly as much as bassist Guy Berryman who appears content and serene. Berryman is also perhaps the most accomplished musician in the band, a sentiment Chris Martin echoes. In addition, he is the most knowledgeable and voracious music fan and historian in the group. 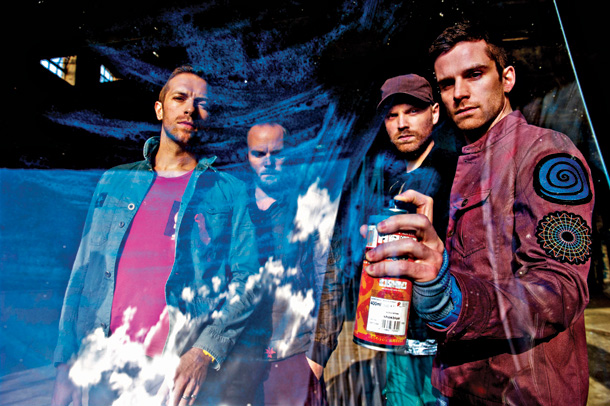 During a hectic day promoting their most recent album, Coldplay described Eno as a major part of their latest success and discussed working with the legendary producer on Viva La Vida and Mylo Xyloto. Eno’s role on Mylo Xyloto is a bit different, as they explained, but clearly the band benefits from his adventurous concepts and hit-making sensibility. It’s ironic how one of the music world’s most enigmatic and artsy cult figures is credited with producing some of the most popular and enduring albums over the past several decades.

Steve Matteo: Describe Brian Eno’s role in the studio on the last two Coldplay albums—how different his input was on each album.

Jonny Buckland: We said to Brian, “Who can we get to produce our album?” This was before we did Viva La Vida.

Chris Martin: We asked him in for lunch, didn’t we?

JB: Yeah, just to meet him. Because he’s such a big hero of ours and we wanted to hear what he had to say about what we should do and who we should work with, and thank goodness he said, “Well, you should get me to produce it.” (laughs)

CM: We said, “Who do you recommend?” He said, “Me.” He’s always claiming he’s given up producing records.

CM: Now he’s kind of like a Gandalf/Dumbledore type of presence. He’s the boss, but he’s not always there. But his presence is always there. When he is there everyone is listening very closely, even though what he’s saying might be quite cryptic and at the time ridiculous, but you realize a week later what he was talking about. Like, for example, on this song that we had called “Up with the Birds” [on Mylo Xyloto]. He came in and listened to it around July [2011], after having worked on it a bit. He’s like, “No, no, no.” He was shaking his head and I thought, Oh God. We’ve got like two weeks left [to finish the album] and he’s throwing it out, having said he liked it. He said, “It needs speed.” It’s a real slow song and he says something and then he lets you work out what he means, and eventually you get it. I’m not doing him a disservice. He’s absolutely wonderful and he’s changed our lives.

Will Champion: On this record he was less of an official producer.

CM: He was a band member, really.

WC: He came in at the beginning of the process to write with us. He kind of joined the band, really. He played keyboards and one of his great passions is singing and getting people to sing together and it’s something we really didn’t do much of before Viva La Vida. And that’s one of his greatest contributions to us—to introduce us to the kind of joys of singing together. For Viva La Vida we went to Barcelona for about four days to record all of the group vocals in kind of a series of strange churches. On this record—whenever Brian would come in—we used to start with vocal warm-ups and exercises and then we would just sing some random gospel music or “Michael, Row the Boat Ashore,” something just to get you in that amazing feeling when you sing as a part of a group. But he just has a way of totally demystifying the magic of music. He works incredibly hard and teaches us to not be afraid of failing and not to fear experimentation, even if it might end up sounding ridiculous. But in order to get somewhere new you have to put in those hours and not be afraid to sound or look ridiculous for an hour or so, which is something we’re not very used to as Englishmen. We spend a lot of our time trying to impress each other and being worried about that. With Brian you totally leave all that at the door and you just come in totally prepared to try anything and try not to be worried about failing.

CM: He never refers back really to the amazing stuff he’s done. So, for us at the time when we started working with him, we were popular and unpopular, but popular, too. You have to pry out of him any information about working with David Bowie or doing “Once in a Lifetime” [with Talking Heads]. Or, how did you do “Where the Streets Have No Name” [with U2]? He doesn’t ever say, “When I did this…” He’s so humble about his achievements, so that kind of put us in a place where we’re going to be students of this guy and forget about being a famous band. We just want to learn from him. He’s really taught us a lot.

SM: Will you work with him again in the future?

CM: It depends on what he’s reading.

Coldplay will be appearing at the Izod Center in East Rutherford, NJ on August 3rd and 4th.