“I have the mouth of a trucker and the soul of an angel,” Nancy Atlas sings on her most recent release It Ain’t That Way Now. The line was never intended to be a complete self-portrait (especially the angel part), but it does capture the grit and tenderness that garners The Nancy Atlas Project a hardcore following on the East End. Atlas is the queen bee of legendary Amagansett nightspot The Stephen Talkhouse, with fans that swarm, dance and multiply over the course of a typical sweaty night. She can break your heart with a lush lullaby à la Lucinda Williams and then rock you till you tingle like Chrissie Hynde. Despite an authentic rock strut, the charismatic lead singer is deeply introspective.

“I would choose writing the song to performing…songwriting is really the moment you have as an artist… When creating art, worrying about what people think is bullshit,” she said.

Atlas, who grew up in Commack, started teasing out her own songs on piano as a young child. “At my eighth grade talent show, I had ten girls singing three part harmony to a song I wrote,” she recalled. She lovingly credits her three older siblings, particularly her brothers, with helping her develop a strong enough presence to be a performer. “You had to have a quick wit just to survive.”

After graduating Commack High School, Atlas studied art history at Cambridge University in the UK and Richmond College in Florence, Italy. She toyed with the idea of being a painter and eventually decided to apply her artistic sensibilities to advertising. Atlas graduated early and was poised to make her mark. “The economy was similar to today. No jobs in advertising,” she said. Contemplating her next move, she started teaching herself guitar and took a solo trek through Egypt.

Returning from abroad, this Renaissance woman with a rock and roll heart resumed her songwriting and moved out to Amagansett—the place where she spent every summer since she was a kid. With just her voice and a guitar, she began performing her own songs at open mic nights in venues from Montauk to Manhattan. This period of solo exploration allowed Atlas to integrate such enduring influences as Johnny Cash, Emmylou Harris and the Stones into her own quickly emerging sound. She simply needed a killer band to take things to the next level. 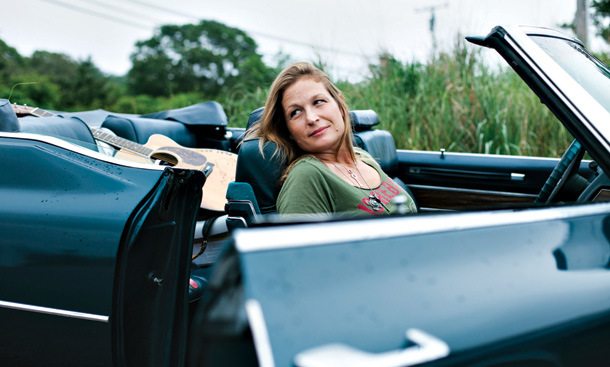 The Nancy Atlas Project came together 16 years ago as a byproduct of a musical mating dance that occurred within the South Fork’s open mic scene. At the end of a typical late night solo smorgasbord at the Talkhouse, she heard guitarist Johnny Blood (John Leitch) for the first time. “It was sonic love at first listen,” said Atlas. Johnny Blood can crank up his ax to a fevering blues inferno and provide understated effervescent accompaniment in the span of seconds. The current line-up of Mr. Blood, Brett King (bass), Richard Rosch (drums) and Neil Surreal (keyboards) has been together for the last ten years. “Any of these guys could play with anyone…I love these guys,” she said proudly. Since Atlas was the principle songwriter and a genetically hardwired leader, she quickly wound up at the helm of the group. Laughing, she added, “I have to swear like a hooker to keep them in line.”

Becoming the house band for The Stephen Talkhouse and regularly rocking such Montauk hotbeds as The Surf Lodge and Gosman’s Dock is no easy feat. Rock royalty may pop in for a beer and then wind up on stage. “We have an awful lot of stage time,” Atlas said, characterizing the group’s ability to roll with the unexpected offerings of an East End summer. The band tastefully kicks butt while playing alt country, traditional country, boogie, reggae, rock and the occasional sea shanty. At a recent early season Talkhouse gig, the dance floor was jumping three songs into the first set. Atlas’ whimsical “Come on white people” to the front-row tourists certainly stirred the nest. This level of dynamism has allowed the group to open for, follow or share the stage with Clarence Clemons, Paul Simon, Elvis Costello and Lucinda Williams.

It Ain’t That Way Now, the band’s fifth album, captures the eclectic mix often heard at a live gig. Such varied tracks as the poignant ballad “Love You From The Sky,” the barnburner “Last Call for Alcohol” and the farcical country kitsch of “Kiss My Ass” demonstrate Atlas’ powerful yet nuanced vocals and the band’s ability to be musically expressive without overpowering a song’s message. Both the writing and the band’s interpretive skills seem to land in a sweet spot somewhere between the feel-good loose vibe of the country-twang-era Stones and the always confidently cohesive Tom Petty. One can sing along to the cd on second listen.

At 41, Atlas is happily married and the mother of a 6 year old and a 6 month old. Living in Montauk for the last seven years, she feels lucky to be able to enjoy both her family and music without extended travel. Over the coming months, the band will begin work on a new cd, play the Great South Bay Music Festival and continue rocking the East End with the strength of Atlas.