“You can never see yourself through someone else’s eyes
And I hate that it takes leaving to finally make you realize
So take these chances now
What do you got to lose?”

– “What Do You Got to Lose” by Jeff LeBlanc

When singer-songwriter Jeff LeBlanc was growing up in Center Moriches, the sounds of everything from The Beatles to jazz and classic rock filled his house. At age 12, the “sports kid” discovered hip-hop, which was played relentlessly before games and practices. But it wasn’t until he was in 10th grade, when an older friend turned him on to Room for Squares by John Mayer, that LeBlanc had a musical epiphany.

“…for some reason, the sound of that record, the lyrics of that record—everyone has a musical moment where one cd can just change your direction or really connect with you, and that disc was it for me,” recalls LeBlanc. “I hadn’t heard something that stimulated my brain like that, so I got really into John Mayer and Howie Day, who was breaking at that time. I really appreciate the singer-songwriter thing—if you can sit down and play a song on the piano or guitar without production or beats, or anything, and it’s still a good song, there’s something about that.”

LeBlanc credits his early days playing at the Beach Bakery Cafe in Westhampton for thickening his skin. It was the summer after he received his first guitar for Christmas and some friends had a band that played the same five covers over and over to fill a three-hour show. He returned to the bakery numerous times with different musicians, eventually playing originals. Along with the tips and baked goods, LeBlanc found the outdoor gigs to be great experience for his future performances. 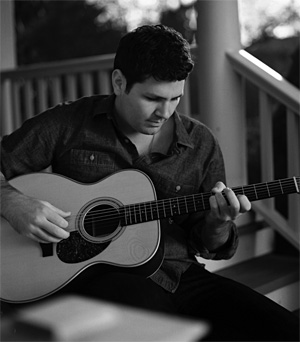 “Playing at the bakery builds up your skin to people requesting songs or yelling things,” notes LeBlanc. “At that point, you get used to anything. So I took that knowledge and moved it to my career now—and whether I’m performing at a college or opening for the Goo Goo Dolls, it’s the same thing, but on a bigger stage.”

While studying history and music at Sacred Heart University in Connecticut, LeBlanc played shows once a semester, and eventually branched out to other schools until he had played about 70 colleges on the East Coast. He also met co-writer Joe Beleznay (who was in John Mayer’s high school band, Villanova Junction) at the registrar’s office.

“The same person that gave me the John Mayer cd, gave me Joe’s music,” says LeBlanc, “and I really dug it.” He sought out Beleznay for help with his classes and they became fast friends and collaborators. “Many of the songs on the new record are with Joe in some way, shape or form. We come up with a little bit of a melodic idea, and then I’ll go do the lyrics on my own, or Joe might, but every song is different with us.”

After LeBlanc’s debut EP Signals garnered praise from Sirius/XM Radio and AOL Music, 2011’s Worth Holding On To hit number three on the iTunes Singer/Songwriter chart. His latest disc is filled with bittersweet lyrics set to upbeat music with a nostalgic feel. LeBlanc’s soothing voice, in the vein of John Mayer or Jack Johnson, often puts him in the category of pop/rock or adult contemporary, but there are also touches of neo-soul and r&b in tracks like “What Do You Got To Lose.”

“I just want to be listenable,” says LeBlanc. “I always listen to music when I’m driving, so if I can be someone’s driving music, that’s what I’d like to be. I don’t know if that’s a category, but driving music would be a good description.”

Known for being in tune with his audience, LeBlanc often tells witty jokes or anecdotes onstage, takes requests or surprises fans with a Rihanna or Crowded House cover. Having played with everyone from Ingrid Michaelson, Matt Nathanson and David Archuleta, to the Goo Goo Dolls and Augustana, who would LeBlanc most like to tour with next?

“I’d obviously love to play with John Mayer or Jamie Cullum. And Adele would be really fun to open for. It’s cool to play with an artist that you want to sit out there and watch after your set, like David Archuleta. He’s a really good vocalist and I would sit and watch him every night.”

Check out Jeff LeBlanc at Joe’s Pub in NYC on July 17 and at The Stephen Talkhouse in Amagansett on August 8.
jeffleblancmusic.com