In his new exhibition Ex Uno Plura (from one, many) at Eric Firestone Gallery in East Hampton, Andrew Schoultz presents a series of American flags drenched in what appears to be molten gold. Beneath the weighty drips and puddles of gilded acrylic paint, the remaining stars and stripes look ravaged by time, and the bulk of the work is displayed on a chaotic swirling motif—it could be tornadoes or bisected tree trunks or limbs—which the artist painted directly on the gallery walls, in red and gold, during the installation.

In toto, Schoultz’s vision is a nod to art history and that of a man in conflict. He is troubled and frustrated by the commercialism and profit-driven motives of modern America and those who lead it. And while his “desecrated” flags inspired shock and anger from a handful of veterans and others in the community who saw them, Schoultz could also be considered a stalwart patriot using his Constitutional rights to speak up for the country he loves.

The 37-year-old San Francisco painter came under fire after the show’s June 23 opening, when his detractors complained that he used actual flags in his work, rather than painting the image of a flag like many of the artists who came before him. “I don’t really consider the flags desecrated at all. I more consider them embellished flags,” Schoultz explained after the opening. “Desecration implies disrespect, which is not my intention at all…” 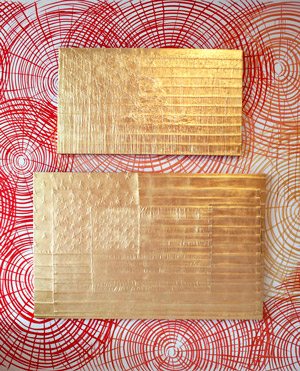 The artist exhibited the series around the country for two years without incident, and during the East Hampton installation Schoultz seemed unaware his work would trigger any outrage. In something of a stream of conscious monologue, he described his intention for creating the now controversial paintings. “I’m intrigued by duality in my work,” Schoultz said, noting that the flag series is at once expressing his various disappointments with America, while also sharing a patriotic message about protecting US jobs and industry from outsourcing and foreign powers.

“I am trying to have my art participate in putting attention more on the problem of American production outsourcing to other countries such as China, which has led to millions of Americans being out of work,” he said, pointing out that those very same Americans out of work are often the most loyal to their flag and country. Schoultz said his use of gold (a symbol for wealth and currency) and the flag (a symbol for the United States) opens a dialogue about the issue. He also talked about the abstract concept of currency backed by gold, and noted that war, environmental issues and globalization are connected to greed and money in America. “The root of my work is talking about how history repeats itself,” he said, noting later, “It’s not a pretty picture.” 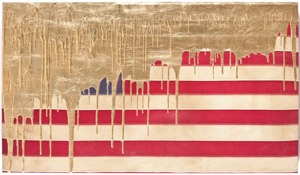 Schoultz began using flags after he ordered a few online and noticed that every “authentic American flag” he bought was made in China and included a barcode on the back. The irony could not be ignored, so he gilded the flags and embossed the front of each with the words “Made in China.” The pieces became a bit less obvious from there. For example, several include the rattlesnake from the “Don’t Tread On Me” Gadsden flag—one of the first American flags and a symbol of patriotism—which, Schoultz explained, was recently used in an ad campaign for Nike, a company that outsources all of its manufacturing. One such flag also features the classic Nike slogan “Just Do It.”

On a more positive note, the painter said that during his process, he realized how powerful and enduring the American flag can be. Even after pouring 20 gallons of gold acrylic paint on the symbol, it remains clearly recognizable. “The flag is not all the way gone, it’s still visible,” Schoultz said, the hopeful metaphor not lost on him. “That’s where we are now. No matter what you do to it, it’s still there.”