Major League Lacrosse, the premier outdoor professional league in the country, got a major overhaul this year. Most notably, the addition of two expansion teams: The Charlotte Hounds and the Ohio Machine. They join six existing teams, including one of the league’s original founding teams, the local Long Island Lizards.

Last year wasn’t exactly stellar for the Lizards. With a 5-7 record, they failed to make the playoffs. According to general manager Casey Hilpert, the Lizards were one of the worst in the league in man-up situations. There was one bright spot on the season—goalie Drew Adams was named 2011 Warrior MLL Goalkeeper of the Year.

The Lizards returned to the field this season with plans for much bigger and better things, and big changes to make those plans possible, ranging from the ownership to the coaching staff to the player roster. For one, they acquired Grant Catalino, a dominant attackman formerly of the Rochester Rattlers. Hilpert said his strong man-up skills would help the team improve in that much-needed area.

Gone is Farmingdale native Matt Danowski, now with the expansion Charlotte Hounds. In his absence, the Lizards earned the first spot in the latest MLL draft, which the team used to select Rob Pannell from Cornell University to fill Danowski’s place. A 2011 ESPY Award nominee for best collegiate athlete, many believe he’s a superstar in the making. The Lizards also acquired the rights to Duke University’s C.J. Costabile, a finalist for the 2012 Tewaaraton Trophy, the college lacrosse equivalent of the Heisman. 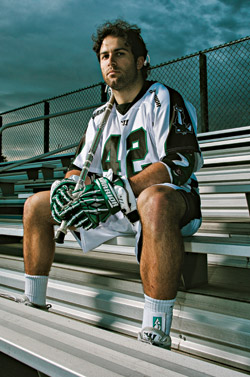 Other changes focus squarely on bringing local boys back home—Long Island players at the top of the game returning to their native territory. For instance, the Lizards acquired MLL veteran, Denver Outlaw, Hofstra grad and Massapequa native Brian Langtry. Early in the season he was already proving dominant, notching 14 goals in the first four games, including five goals in Long Island’s impressive 20–10 win over the Ohio Machine in early June.

The Lizards also acquired Langtry’s Denver teammate and Hewlett native Max Seibald. Like Pannell, he’s a Cornell grad, where he was a four-time All-American and 2009 Tewaaraton winner. One year later, Seibald led Team USA to the gold medal and was named to the All-World Team.

“We’ve had our eye on him since he was at Cornell and we’ve wanted to bring him back to the Island,” said Hilpert. “It took a few years, but we’re happy to finally have him here.”

Seibald is pleased, too. “I’m fortunate to be back on Long Island where I’m from…with the opportunity to play in front of family and friends and locals…For me, there are so many connections to Long Island, so much of me is rooted here, that it just makes sense,” Seibald said. (He coaches at his Maximum Lacrosse Camps for youth, which visits Cantiague Park in Hicksville July 30-August 1.) “It felt like I was coming home, even before I’d stepped on the field for the Lizards.”

The Lizards also announced a new head coach, Joe Spallina, the women’s lacrosse head coach at SUNY Stony Brook. “He’s going to bring passion and a lot of fire,” Hilpert said. In addition, at the end of May, a group of investors that includes Medallion Financial Corp. and legendary NFL Hall of Famer Jim Brown acquired the Lizards. Though perhaps best known for his accomplishments on the gridiron, Brown is a Long Island native who played high school lacrosse for Manhasset. He attended Syracuse University where he was named a First Team All-American in football and lacrosse.

Spallina, Brown and many of the players’ Long Island roots are proving to be ties that bind. (Of nearly 40 players on the roster this season, only four had to fly in for spring training.) Early in that training, it was already evident that they were a cohesive unit on the playing field. “On the first day of practice you could tell there was a change, a sense of urgency,” Hilpert said. “[Spallina] demanded excellence from these guys right away, and they embraced it.” Seibald noticed the decidedly positive attitude among his teammates. “At training camp, there was new fresh energy,” he said.

All of these changes promise to heighten performance this season. “We want to go into every game and win,” Seibald said. “The end goal is winning a championship. We have the talent and the work ethic. That’s a pretty dangerous combo. There’s no reason we can’t.”