Darius Yektai’s waves are structural, ominous paintings of mostly black, white and silver. These oils, best at their most imposing 8-foot scale, capture the action of subject and painter in thick, aggressive strokes and splashes as violent and grand as the swells and barrels they portray. The work commands respect, not only for the visceral strength in each image, but also for 39-year-old Yektai, who gives a potentially trite subject weight, movement and originality. I defy anyone prone to seasickness to stand before the largest compositions and not beg for Dramamine.

“I just sort of fell into it last year, painting the waves,” Yektai said during a tour of his massive Sagaponack studio. A longtime surfer, Yektai said he “feels” the waves and water, and he employed various techniques to recreate the action of the sea on canvas. The painter used spray paint to reflect the way waves spray and he allowed his paint to run, splash and drip as the ocean would. “It just makes sense,” Yektai said, describing subject, process and material as one. “The quality of paint describes the image.”

Three-dimensional elements, including paintbrushes, empty and flattened paint tubes, little stones, gems and other studio detritus are collaged onto a number of canvases, further amplifying the waves’ power. The objects appear as driftwood, floating debris or perhaps the remnants of some man-made structure or ship recently shattered by nature’s might. 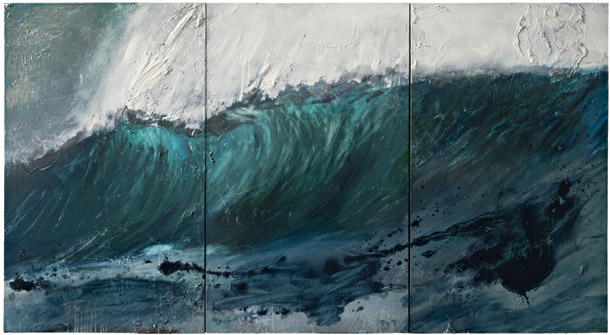 Despite the dark tones and vigorous brushwork, Yektai’s waves do not feel gloomy or maleficent. Instead, the work exults and reveres the potency and beauty of nature, while celebrating the joy of painting in both material and activity.

Along with the larger canvases, the artist has done a number of works on paper, which has been primed heavily and made to feel like leather. These smaller waves tend to feel quieter than the larger pieces, and many explore the contrast and order of nature, Yektai explained, pointing to a series of triptychs and diptychs on paper. “It sets up kind of an organic geometry,” he said, noting that certain paintings demonstrate yin and yang or darkness and light between the wave and the sky, or the shadowy tube beneath its crest.

Based loosely on photographic references, the waves are the product of exploration and experimentation, and the final product plays with depth and surface. Thick white negative space may at times come to the fore, pushing the wave back, and abstract expressionist flourishes are splattered and poured across Yektai’s loose renderings, deftly communicating his spontaneity. “The paintings are kinetic,” he said. “It’s really all about the surface.” 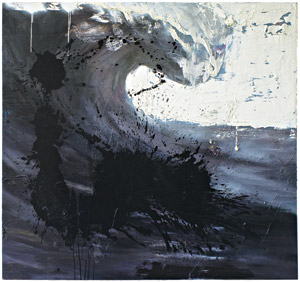 At first, Yektai painted surfers on the waves, but it quickly became clear that adding people was a disastrous choice. “I had to take them out,” he said, noting that removing the surfers returned the focus to the waves and the paint. “It’s a more universal painting than specific,” Yektai said, describing the work as objective, not subjective. “Taking the man out puts the viewer in.”

Yektai was born in Southampton, where he also shows at Tripoli Gallery. He spent his childhood in Manhattan and eventually studied art at Occidental College in Los Angeles and The American University of Paris, where he encountered and learned from the work of all the great masters. “They would take you to the paintings,” he said. “I think you see a lot of art history in my paintings, in a way.”

Shortly after college, the young painter had children and moved to San Diego, but he eventually returned to the East End in the interest of his family.

His children, now 15, 12 and 9 are nearly ubiquitous in much of Yektai’s work. “They are the reason I’m out here,” he said, adding that his paintings include his greatest loves and surfing is one of them.

The wave paintings could be viewed as an easy sell in the sea and farmland obsessed East End, but Yektai’s approach and genuine affection for the churning surf is beyond reproach. “You can spend your whole life painting to a market, but I like a challenge,” he said. The wave paintings are not settled in an easy place, but painting them comes naturally. “The less I think when I paint, the better,” Yektai said, admiring his work. “For me it feels like I was in a good place.”

Darius Yektai: New Work, which includes the series of untitled wave paintings in a wide array of sizes and formats, is on view at the new Peter Marcelle Gallery in Bridgehampton through July 9.