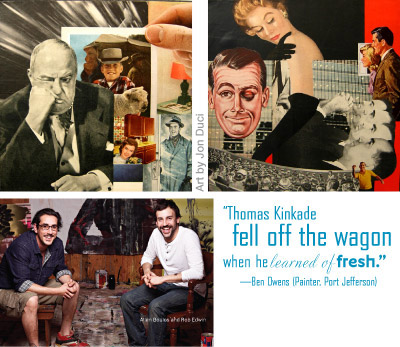 At First Glance
Dedicated to underground and emerging artists on Long Island, the FRESH collective keeps things worthy of its name by showing progressive and subcultural work in interesting alternative spaces. According to co-founder Robert Edwin, FRESH tries to “keep our sense of humor while making sure we are experimenting and challenging ourselves.” The collective maintains a home-base gallery with monthly exhibitions at Toast Coffeehouse in Port Jefferson, where they often debut new artists. “Developing a sense of community has always been our main focus,” says Edwin, noting that FRESH enjoys creating long-term personal relationships with the artists they show.

On Curating
Co-founded by Edwin and Allen Boulos in 2006, FRESH’s curatorial directive stems from the given space for each show, which then dictates the group’s approach to choosing and installing work. “We like employing all kinds of mediums, combining performance art, music, video, etcetera, and having them work together to provide the viewer a full sensory experience,” remarks Edwin. Most recently, FRESH has been exploring the idea of multimedia shows with a collaborative artists’ networking event called “Hit The Lights” at Islip Art Museum.

On Collaborating
FRESH operates heavily in the arena of collaboration, working with established traditional venues like Parrish Art Museum in Southampton and Islip Art Museum, as well as other art collectives. “We like to develop a concept and then allow the artists to interpret it as they see fit,” explains Edwin. In the summer of 2011, FRESH curated an installation called The Great American Living Room at the historic Vail-Leavitt Music Hall in Riverhead. “Sort of an elegy for the television and its relationship to American families and homes,” the installation fit perfectly within the storied 19th century theater. One of the elements of this was “to find an old console television from the fifties that barely worked and set it up on the stage as if it was a funeral viewing. It was one of our more effective and fully realized installations,” Edwin says.