All the world’s a stage, or so it seems, for Robert Wilson. The revered avant-garde director, actor and designer makes Water Mill his summer home and creative cauldron. At the sprawling Watermill Center, it’s the world that comes to his stage. Throughout the year, some 200 artists from more than 30 nations are selected to spend a few weeks pursuing their dreams on the six-acre spread.

i am running in place.

At Watermill I feel I am inviting people to my home and sharing the space with them,” he said. “The landscape and light of Water Mill will always inspire me.” 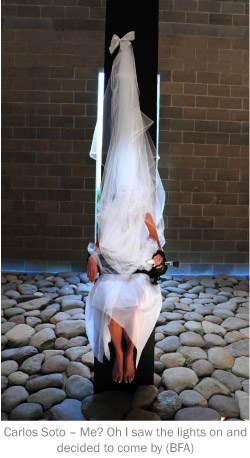 In early July, Wilson will take up residence in his spartan apartment within a sleek 22,000 square-foot building. Completed in 2006, the new building stands in the footprint of a former Western Union communication research facility. Today, it does a different kind of communication.

Through mid-August, Wilson will mentor approximately 50-60 young artists selected for this year’s International Summer Program, now in its 20th year, while working on several of his own projects, which he spends the rest of the year presenting in places near and far.

A native of Waco, Texas, Wilson attended the University of Texas before moving to New York in 1963 to attend the Pratt Institute in Brooklyn. He soon became a leader in the flourishing downtown arts scene, embracing everything from visual arts and dance to music and theater. Since then, he’s been expanding into the rest of the world.

Wilson turned 70 last year—an event marked by celebrations in Italy, Germany, two cities in Brazil and in Brooklyn—and has long been active in helping a new generation of artists. Though he is hailed as a visionary for his mesmerizing theatrical dreamscapes, Wilson said he allows the young emerging artists at his center to “develop their own work in an aesthetic that can be completely different from my own. This is how I learn and grow in my own work.”

i am running in a stream. this is my dream. chum chum chum. i am chumming artists to fish fish fish. even vampires like sushi.

A benefit gala on July 28 (celebrities like Sharon Stone, Calvin Klein and Alan Cumming have attended in past years) and a free public open house on August 12 called Discover Watermill are highlights at the center. At both, visitors may tour the building and grounds, where the center’s 7,000 or so artifacts and artworks will be on display along with installations and performances by the visiting artists. A third program, off-site, will also feature work of the guest artists. The public is invited to lectures, rehearsals, performances and tours at other times of the year, too. If it’s not summer, though, Wilson will almost certainly be elsewhere.

i show up when they least expect it. gills shining. tail tailing.

Earlier this year, he acted the demanding solo role in Samuel Beckett’s Krapp’s Last Tape in St. Pölten, Austria and São Paolo, Brazil in a production he also directed and designed. Also this year, he launched a year-long tour of a new production of Einstein on the Beach, the five-hour-long opera he created with composer Philip Glass in 1976 that many consider his masterpiece. The world premiere was in Montpellier, France.

The Einstein tour arrives at the Brooklyn Academy of Music in September and ends next year in Hong Kong. In an interview with the BBC in May, Glass called the show “a kind of bizarre and very intriguing package.”

There’s more. In Madrid in April, Wilson directed The Life and Death of Marina Abramovi?, a play with music for which he also designed the set and costumes. Featured in the cast is Willem Dafoe—if you’ve ever seen him act, you’ll get another inkling of what Wilson’s exceedingly strange but gripping work is like. The New York Times critic John Rockwell called Wilson’s effort “quite wonderful.”

Wilson himself is mindful of the balance between pursuing experimental work that hardly anyone sees and reaching a larger audience. “My works are seen often in the mainstream. I have three productions every year at the Berliner Ensemble and productions at the Paris Opera,” he said. Indeed, he’s probably better known in Europe, South America and Asia than he is in the United States.

Early on, in 1975 when he was 34, he brought one of his avant-garde productions, A Letter for Queen Victoria, to Broadway. The three-hour work had been acclaimed during a year-long European tour, where it often sold out. He cast his grandmother, Alma Hamilton, in the title role. He produced the piece himself and it earned a Tony Award nomination for Best Original Score and a Drama Desk award for Unique Theatrical Experience.

What it didn’t get was a substantial audience. He had to close it early, after 18 performances. He later told Katharina Otto-Bernstein, who made a 2006 documentary and wrote a biography about Wilson, both titled Absolute Wilson: “It was a disaster! One of the ushers told me that a little blue-haired lady from New Jersey had left after the first act, and she said, ‘Honey, I know it’s a turkey, but what does it mean?’” Still, he said he wasn’t sorry he did it. “I think we should have everything available to us. There is an audience waiting for an alternative theater.”

That’s what he’s still after. “I love introducing new, young artists to a new audience. Artists should always create work for a new audience,” he said. “One of the things I love most about Watermill is that young and emerging artists live and work with well-established artists throughout the summer. Young artists can respond to the work of great artists and start a dialogue with them. We host a lecture series to allow the emerging artists the chance to learn from these mentors. They sit at the dining tables and share meals with them. This fosters experimentation and facilitates a dialogue about art.”

celebrities are people too. celebrities have faces. they have gills. they have songs. eenie meanie my knee blows
your knee a kiss and we are friends.
right there on the red carpet in front of everyone. and brad pitt said yes but he only said it to me and only if it would rain on his sox and he could have a gun. and now it’s on youtube. you can see it. check. and isabella said yes but she said it to you and then she said it to me. and somebody else said no but nixon said it doesn’t matter. tomorrow is another yes when you keep run run running in a beam of some thing that is pulling you through.

What actually brought him to Long Island? “In the 1960s and 1970s, I spent time with Jerome Robbins in houses he rented in Water Mill and at [designer] Christophe de Menil’s house in Amagansett…Through Richard Rutkowski, who was a student at Harvard and my assistant at the time, I was shown the old Western Union building in Water Mill. He knew the building because he grew up next door to it. It had been vacant since 1965 and was in terrible condition. When I saw the building and the six acres, I immediately knew that this was what I was looking for. The building reminded me of my Spring Street loft, a factory-like space. So I took all my savings and managed to raise some additional monies to purchase the building and the property for $425,000. Pierre Bergé was the first to give a major gift for the acquisition.” (Bergé was the cofounder of the Yves Saint Laurent Couture House.)

The Spring Street loft to which Wilson referred was the home of the Byrd Hoffman School of Byrds, a performance group he founded in 1968 that is now defunct. He supports the Watermill Center and other educational work through the Byrd Hoffman Watermill Foundation. Which makes one wonder, of course, who this Byrd Hoffman is.

“Byrd Hoffman was a woman who taught dance in Waco, Texas, where I was born and grew up. As a young person I stuttered and she said to me that I should take more time, and by slowing down words I gradually overcame the problem of stuttering. It was like I was speeding in space. She had a profound understanding of the body. She was a visual artist as well and she inspired me to study the arts.”

Besides founding his school, Wilson also adopted a deaf-mute African-American boy named Raymond Andrews in 1968, and the experience became the basis for his seven-hour play Deafman Glance. It opened in Paris in 1971 as a “silent opera,” which Wilson considers a career changing success. An earlier version, a mere four hours long, played at the Brooklyn Academy of Music, prompting The New Yorker to call it “probably the oddest and certainly the most elusive theatre work of the current season…performed by a cast of eighty-six persons, a live goat, and a live monkey.” Many audience members reportedly left early, but among those who stayed, according to Otto-Bernstein’s biography, were three panelists from the New York State Council on the Arts. One of them was the lyricist and screenwriter Betty Comden (Singin’ in the Rain, On the Town) who said, “I don’t really have a clue about it, but it works. We should give him a lot of money.” And they did—$15,000, a princely sum for a young artist.

And this is the guy who now spends his summers on the East End. Only, of course, not the way most people do. “I lead workshops for new productions, design projects and [prepare] exhibitions. We also host our Gala Benefit the last weekend of July where we raise much of the needed funds to support our year-round artist residency, education and humanities programs. This year it is called The Big Bang.” The artists may interpret that theme however they wish for their performances and installations.

rufus held my hand and i held his, right there. some guys are buried out back. mamma said it’s ok so long as they say poetry so i gave them some. a girl brushed his hair out of his eyes, she’s a poet, too. there were glitter girls because all girls glitter because everyone knows glittery girls are the best because you can see them underwater even at night.

But Wilson doesn’t feel his work is done. “Watermill continues to grow and expand. It will never be finished,” he said. “My vision for the future of Watermill involves an expanded Library For Inspiration. It will be situated at the heart of the center, where international artists and thinkers gather to collaborate and exchange ideas. It will be a new electronic library that will merge holdings of art, artifacts, archives, books and digital media—inspiration that stimulates all the senses.” It will be a creative center, “where artists and visitors learn by doing.”

*subconscious subtext inspired by a collection of works by Robert Wilson, mused, chewed and abused by the editors.

To a Violent Grave: An Oral Biography of Jackson Pollock by Jeffrey Potter
The explosive life and career of a local legend, told by the people who knew him.

The Philosophy of Andy Warhol: From A to B and Back Again by Andy Warhol
1975 autobiography by the real king of pop, detailing his life, career and all the in-betweens.

The New Drawing on the Right Side of the Brain by Betty Edwards
Updated edition of the quintessential guide to drawing, shading and perspective.

Air Guitar: Essays on Art & Democracy by Dave Hickey
Classic plain-spoken essays on art and culture by a master of modern art writing.