In crafting characters and stories that thread the needle between good and evil, Romeo Tirone walks the finest of lines. As cinematographer and director of HBO’s hit series True Blood and Showtime’s Dexter, Tirone’s rich palette and taut, confident approach continue to draw millions of television viewers into the swirling dance between reality and fantasy.

Tirone is Brooklyn born and currently bi-coastal—with homes in both Los Angeles and Dix Hills. He got his first taste of the creative arts in St. John’s University’s lone filmmaking course while enrolled as an undergraduate. After learning the ropes as a rental house camera tech, two of his first high profile gigs were on the iconic Run DMC/Aerosmith video for “Walk This Way” and the visually unforgettable Roy Orbison and Friends: A Black and White Night. In the late 1980s his blossoming interests and talents ran perfectly parallel to the meteoric rise of MTV. Soon Tirone found himself parachuting into the thick of A-list music video production at its peak, working with everyone from Ozzy to Ice Cube.

“Music videos were just becoming the force they’ve now become,” Tirone said. “They were such a new thing that they were basically letting anyone direct and shoot them. I found myself in LA with some money in my pocket and I decided to stay.”

This extensive period of experimentation and mastery segued into a long run of directing high-end tv commercials and culminated in his prominent role on the crew of the 2008 documentary U2 3D, where he had the good fortune to “run and gun” documentary-style with the band’s iconic frontman Bono at his side.

“I traveled with U2 in South America for two weeks,” Tirone said. “It was amazing. I thought [Bono] was a very solid gentleman. He was true to everything that he’s preaching. I have to say, it was one of those moments that you wonder, am I ever going to top this?”

Now at the helm of two of cable television’s most popular and compelling shows, Tirone’s aesthetic vacillates between the startling violence verité of David Cronenberg and the surreal saturation and narcotic tension of Stanley Kubrick. His signature use of contrasting light, sharp colors, suffocating composition and chokehold timing are all woven together to deliver the ever-important “singleness of effect” that circles all the way back to Edgar Allan Poe’s true essence of horror.

Like his mentor John Dahl (director of the classic indie thriller Red Rock West and numerous Dexter episodes), Tirone knows exactly when to hang tight, when to stick and move—and best of all—when to get the fuck out of the way to let the story and the characters connect to each other and the lens. This is especially true of his relationship with Dexter Morgan, the forensic specialist/avenging serial killer portrayed with frightening ease by Michael C. Hall.

“Michael C. Hall really brings that character to life,” Tirone said. “That’s a character that really rides the razor’s edge and Michael really pulls it off. Our relationship is very, very good. After six years of working together, we have a very strong sense of trust.”

In the brilliant way that Hall portrays him, Dexter is hardly all doom and gloom. He can be painfully charming, joyfully mischievous and overtly narcissistic. And sometimes, when the pressures of everyday life get to be too much, he’s just looking for some kicks to blow off steam. Granted, they’re kicks with sickening consequences, but, at the end of the day, Dexter is both the Batman and the little boy in all of us.

“People have to remember that Dexter is crazy!” Tirone laughed. “I think the fantasy of being able to right injustices is one that everyone has. Dexter, taking this dark force that he has inside of him and using it for good is, I think, the theme that really captures people. Even though he’s immoral in his actions, he’s morally on the correct side of things. There’s also Dexter’s kind of wry, self-deprecating sense of humor that locks people in and reminds people that he is very human. But at the same time, you feel that at any moment he could really go nuts.” 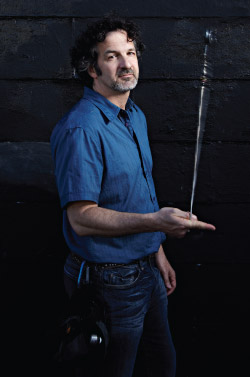 Tirone’s interpretation of Dexter the project and Dexter the man(iac) is one of seamless duality. Dexter’s warped, violent version of doing “the next right thing” only seems half wrong, and sometimes not wrong at all. The moral plight of the “Dark Passenger” is a red hot theme that pervades virtually every aspect of the Dexter production, and it’s both Tirone’s obligation and his opportunity to carry that torch with the highest creative standards, at all times.

“Most of the people have been there from the beginning,” Tirone said of the cast and crew that bring Dexter to life. “It’s really become something interesting. Everyone on the set can’t wait for that next script to come.
Everyone has a huge critique of what Dexter does and doesn’t do. There is a vested interest. We’re all fans. There’s only twelve episodes per season, so we want to make every one count. Audiences don’t want to know what’s coming next. We think Dexter does a good job of that.”

For all of his noble schizophrenia and his meta-spiritual rationalization, Dexter’s most horrifying attribute is his most relatable—fatherhood. It’s not only his penchant for bloodletting in the name of cosmic justice that makes Dexter by turns repugnant and riveting, it’s knowing that his bloodlust may very well be passed on to his innocent young son Harrison, whom Dexter is raising alone.

“As a father I can obviously relate to Dexter,” said Tirone, who has two sons of his own. “You want to form strong bonds with your children and do everything you can for them. Obviously the way Dexter was brought up was detrimental to him. It’s hard to say if Dexter just is this way—or was he created by [his adoptive father] Harry? Every season has an overall theme, and most of those themes are very common and universal. Being a parent is one of them. In the end, I think Dexter’s instinct is to protect Harrison. In his intense, compartmentalized decision-making, Dexter really does want to be a good father. He does not want the life that he has to be Harrison’s life.”

Once rooted to (if not rooting for) Dexter, it’s a fair and common question to wonder, how does Dexter reconcile with himself? A more creative question might be, how does Tirone reconcile himself with Dexter? Better yet, how does Tirone reconcile all of this complex psychology with his core creative role in the production while enduring 12- to 16-hour shoots, five days a week? In order to effectively orchestrate the symphony of sight, sound and teetering insanity that is Dexter, Tirone keeps a smart, safe distance—but he’s hardly detached.

“I wouldn’t say that there’s much of me in Dexter, or much of Dexter in me,” Tirone said thoughtfully. “Personally, I can disconnect from Dexter pretty easily. I’m not a method cinematographer. In the show, in the visual look, there’s a lot of me. My job as a cinematographer is to be the last stand of what the look is and making sure that the show stays the show. A lot of decisions are made, but right on set it’s my decision to make sure it stays looking like Dexter. When I ended up scoring a directing role, I made sure to focus on performance. The whole cast are such generous, loving people and they made my transition very easy.”

Whether he’s in the role of cinematographer or director, the multi-faceted nature of Dexter is a prism that Tirone deftly manipulates. His style balances the tight, progressive storytelling that current character-driven serial cable television demands and the more nuanced, thought provoking elements of cinematic linguistics that his complex subject matter invites.

“What I always try to do is the interesting thing,” Tirone explained. “When I’m looking at a shot, I want to make sure I’m not doing the easy thing or just the beautiful thing. It’s very easy to get caught up in, ‘Let me just make this look beautiful.’ I always go for the unusual and I try not to repeat myself, which is hard on a tv show. We’re always looking for new ways to see things. That’s more inspiring than anything else.”

Tirone has spent most of his adult life in the entertainment industry at the highest creative and commercial levels, this at a time when multiple forces have conspired to radically shift how we create and consume our popular media. In a short twenty years, he’s experienced game-changing advances in creative technology, drastic shifts in Hollywood’s financing modus operandi and dizzying changes in distribution methodology. Rolling with all of that, Tirone has deeply influenced our collective artistic consciousness by making intelligent, sexy, scary television. As he continues on his creative path, Tirone knows there’s more change to come, and he has embraced it fully.

“I’m very optimistic,” Tirone said about the future of film and television. “People who are coming up now, they will be able to express themselves in such a small box at such a low price tag. Where before, to make a really good first film you’d have to spend twenty to thirty thousand dollars and you’d barely get everything up to speed. Now you can probably do something for four hundred dollars. But even though the technology is easier to access, you still need the people who are the artists—the ones who were meant to be doing it—to rise. Audiences are much more sophisticated now and they’ve come to expect to see things at a very high level. That’s a good thing.”

Season Seven of Dexter premieres on Showtime on September 30. Season Five of True Blood premiered on HBO on June 10. When Mr. Tirone is not at the helm of these two shows, you might find him on a charter boat off Montauk trolling for stripers.