Summer. When we’re all cast adrift. When we leave the shore. When we immerse ourselves in the waters of our imagination and swim forever. When we renew and transform. What better vehicle is there to deliver our most fruitful and profound transformations than a sublime summer music festival?

When I was younger, the summer music festival was the playground I called home. It was the Disneyland of my 20s. I plotted out and made the sojourn almost every year. First it was Lollapalooza, then the H.O.R.D.E. festival, and as I got older, Bonnaroo and Coachella entered into the equation. The trips to the enchanted forest (and, in the case of Burning Man, the charmed desert) were golden, but they were still trips. I hungered for something…nearer.

There’s an inflatable bouncing beach ball about 20 yards away that rises every so often and seems to stay airborne for the length of a soulful wail or the sound of a bent guitar string. It is graceful yet fallible, filled with enough urge to give it flight, but not enough to transcend the human condition’s greatest and most inescapable rival—gravity. Or maybe it’s not gravity that keeps pulling it back down. Maybe there’s so much fun going on right here on the ground that it can’t help but return for more.

Like a kind of bright star, the Great South Bay Music Festival’s tug of gravity stirs up the loose asteroids that we are and shapes us into tiny oscillating planets every summer. For an afternoon, an evening or an entire weekend (and for the past five years), we’re assembled in perfect gravitational circles. We create a home in the galaxy. We exist in the universe.

I think about these things while listening to James Maddock’s spirited set on the second night of 2011’s installment of the greatest music festival this side of the East River. I’m talking about our wonderful island, of course, but if you consider the way the Great South Bay Music Festival has grown over the last few years, the annual gathering of music lovers may be among the finest in the Northeast. I just played a set of songs from my own catalogue in front of a great crowd of old friends and new fans, and I’m checking out the work of my current favorite songwriter. I’m in the Jambalaya Tent, home of the second stage, just a stone’s throw from the majestic Great South Bay. If she could smile, she’d be beaming right now like the fella in the front row. Like the whole room. And the field outside. And everyone on all the stages. On nights like this, one might feel that Long Island was meant for this, carved out of a glacial meltdown for this very moment. We are often too stuck in traffic, too divided by our own little compartments of geography, and too weighed down by the complexities of living where we live to truly enjoy the land and sky and each other. Tonight there are fences and barriers, yes, and there are crowds (evidence that people still love live music), but when Maddock sings “Step into the Water,” we know we have to—at least once every summer—jump into the moment for a while, for imagination’s sake, for solace from tough times and for pure celebration. 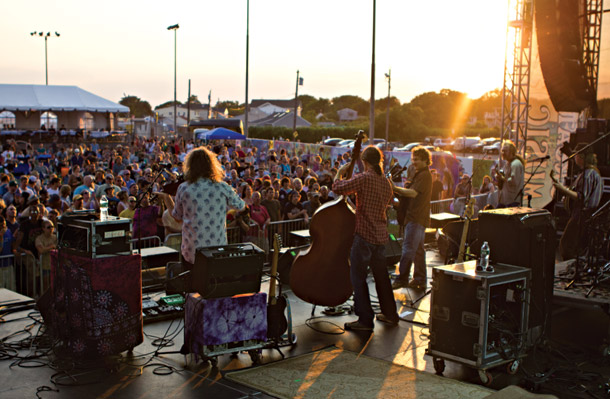 A triumphant howl or two rise into the ether. Yes. There are certainly plenty of things to celebrate this year at Great South Bay. Last night Jorma Kaukonen and Electric Hot Tuna played the main stage, as did David Bromberg and his quartet. It’s the same stage that Richie Havens played and Robert Randolph and a host of other music luminaries. Later this evening, the jam-hungry crowd will dive into the sonic play of Umphrey’s McGee after an inspired performance by Railroad Earth. The crowd will swell like the Atlantic at high tide and ebb into the deeper night. Hula-hoopers will gyrate. Bubbles will be blown and sent into the atmosphere. People will make art on community boards and visit vendors and artisans and inventive craftspeople. Some will be lost.

Some will be found. They’ll trade stories of festivals past: “That moment when we all sang with Odetta gave me chills” or “Mickey Hart was unreal, man. Unreal!” They’ll drink and eat and be merry listening to Kerry Kearney play the blues through a tiny amp offstage by the merchandise table. They’ll shake hands with fest cofounder Jim Faith of LI Music Hall of Fame renown, who will be beaming with joy because, after all, who’s better to put on Long Island’s largest festival of serious original music than one of its biggest fans? They’ll hear the sounds echo and reverberate off the hoods of cars in the parking lot and down the street as they leave and prepare for some sweet dreaming and the promise of more tomorrow. 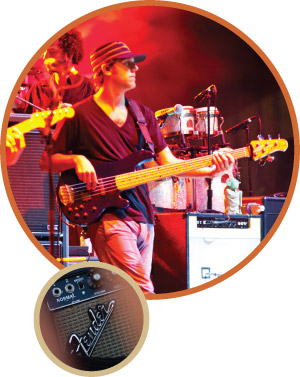 It’s getting late and I’m swooning in the philosophical. I’ve packed up the guitars and amps and I’m leaning against the stage for a bit of reflection. The outdoor music festival is both a supremely public and highly personal experience. I note this as I see lovers stare into each other surrounded by a thousand or so bodies bouncing to the beat. I also see kids and older folks. I even see myself 15 years ago. There I am in impassioned reverie. I’m lost in the goo of the moment building the illusion (for what are we without our little illusions of grandeur?) in order to make sense of the world. I’m in orbit.

It’s quite fascinating how we recognize and experience the energy en masse but feel every note is played specifically for us. The summer music festival is truly a transcendental experience with a capital T. I’m talking about Emerson and Thoreau here. I’m talking about Walt Whitman and the great American Renaissance. We embrace our individuality while being immersed in community. It’s democratic, spiritual and everything this country is supposed to be. And now, because of the Great South Bay Music Festival, it’s right here in our backyard and we couldn’t be prouder.

Sunday: Sunday is an ode to the eclectic capped off with The Music of Led Zeppelin (A Rock Symphony) led (no pun intended) by Zebra’s Randy Jackson singing in front of a full orchestra. Ollabelle, featuring the late Levon Helm’s daughter Amy on mandola and vocals, performs as does returning festival favorite Jay Scott and festival first-timer Aeroplane Pageant. Look also for the genre-bending Garland Jeffreys.

Bonus: A new third stage in the bandshell sponsored by Port Jefferson’s School of Rock will showcase young and emerging talent all weekend. Some artists on this stage include Charlie Dane, Ryan Cassata and Jillian Rae. Live art installations are provided by Long Island Creative Vortex and Studio E.

The Great South Bay Music Festival was co-founded by Jim Faith and Joe Tesoriero, who also produce the event with the indefatigable help of Grace Tesoriero and Jamie Faith. It’s a 100-percent, all ages, family-friendly, rockin’ and rollin’ affair for lovers of music, art and good times.

For a complete listing of bands, ticket information, directions and other relevant information, visit http://www.greatsouthbaymusicfestival.com.