I was somewhere around Rockville Centre, vehicle-ing beneath an impossible expanse of Long Island sky, when it apprehended my gullet. It demanded action. It demanded immediacy. It, specifically, was man’s innate appetite for exploration. Burgers, too. 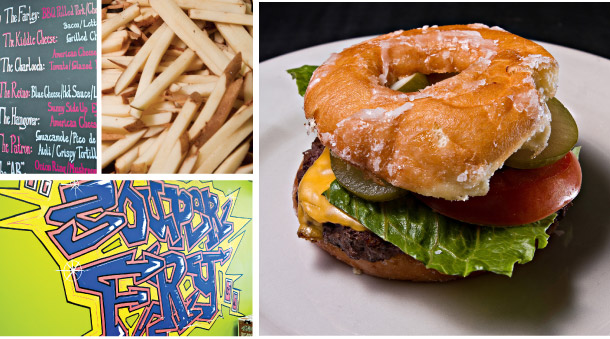 It is immediately visible upon perusal of Souper Fry’s chalkboarded catalog of six burger mashups.

An initial reverie creates brain photographs of an enchanted Italian-American unicorn that gallops across the Merrick sky, assisting famished children wishing to divide their hamburgers into quarters with a folk-horsie’s spiraled horn. But Souper Fry owner Jonathan Passman explains The Charlooch, his fusion of burger and donut, while catapulting hand-cut French fries into a brown paper bag.

“Einstein attempted to analyze Charloochian Theory, which examines similar frequency patterns between burger and donut, but failed,” says Passman, who opened Souper Fry in 2007. “After several years of intense experimentia, I devised a mathematical formula to accurately display the connection.”

“The Charlooch is an astronomical phenomena, indeed,” I conclude, as tiny frost-glaze particulates and meat juice absorb into my fingers.

A burger situated within a donut. The molecular unity of sweet and meat. 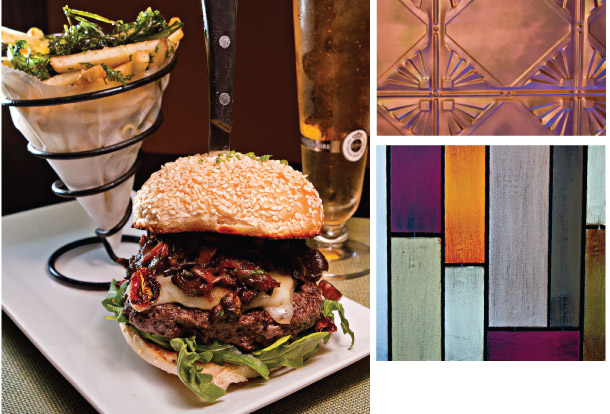 Initial arrival to Snaps American Bistro, cuddled within a six-establishment stretch on Wantagh Avenue, is thwarted and bludgeoned repeatedly with an ironic weapon—a dense, silver-inked Sharpie. The prose-creating implement, employed by staff and used within the present situation as a dominant source of consumer regulation, has scribbled WEDNESDAY-SUNDAY OPEN at 4PM across Snaps American Bistro’s exterior glass.

Idle text-messagery (e.g., “hey what r u doin,” “ummm im bored tell me a story,” and “i miss you!!!”) threatens to temporarily seize the protagonist’s attention, but is dropkicked and defeated by his lacerated copy of Burroughs’ The Ticket That Exploded.

“Modern man has lost the option of silence. Try halting sub-vocal speech. Try to achieve even ten seconds of inner silence. You will encounter a resisting organism that forces you to talk. That organism is the word…”

I am escorted to a five-stool bar and approached by Scott Bradley, proprietor, who is beneath a Kool-Aid Man-colored bandana. His goatee resembles Scott Ian’s of Anthrax, though restrained with several rubber bands.
A chin scepter.

“I didn’t want to serve burgers when I first opened,” says Bradley, who established Snaps American Bistro in 2004. “But they saved me. I realized I could be creative with how we serve them. They’re not basic burgers with lettuce and tomatoes.” 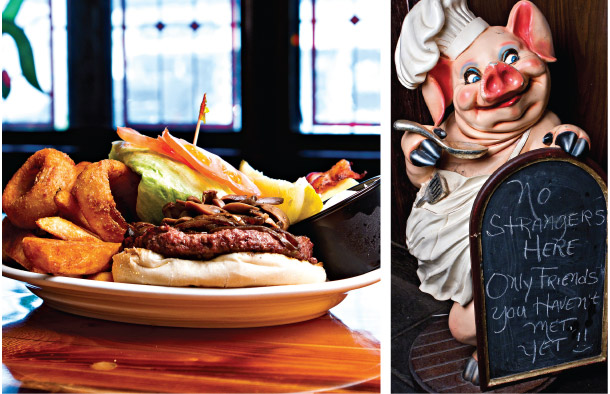 Narrator: “The snout is an anterior protrusion, face-located, identifiable by the extension of two follicle-sprouted lines merging to form the nostrils. A defiant anatomical structure, it denotes pig’s absolute rejection of accepted beauty. The snout. A tangible presence. There exists significance…”

Someone counts Two Morrow’s interior ornamentation, a medley of pig bric-a-brac amid alcohol glassware and boom microphones. Though often inaudible, Someone possesses reputation as an estimable actor within teevee, lauded for his muscular chin and application of Facebookian imagery to craft vivid stretches of words into sentences.

“Significance exists within this collection of snouts,” I reply, arm-bandaged, clutching a wooden pig with Adamantium resolve.

The scene dissolves into an infomercial for a Colin Farrell-branded fitness apparatus. Artificial air pumps off-camera through an industrial vent as a man wearing a neon gas mask provides instruction from a hot air balloon suspended above the set. Though inaudible, several actors nod and shuffle to their respective cues…

Two Piggy Platters are delivered to our table by Aileen Morrow, waitress and daughter of Bob and Sheila Morrow, owners of Two Morrow’s Pub. She explains the origin of Piggy Platter—a half-pound hamburger with unlimited accessories served since Two Morrow’s Pub opened in 1977—as patrons converse and drink from empty glasses.

“My father’s nickname is Piggy, and my mother has been collecting pig things for thirty years,” she says. “We had over 100,000 pigs in here at one point.”

“Significance exists within this collection of snouts,” I reply, from an infomercial-purchased invisible wheelchair. Though I have consumed my Piggy Platter—a skyscraping meatpie with Swiss and mushrooms—63 times, it rematerializes prior to each inaudible directorial cue.

Alternate Ending (Blu-Ray Edition): 26-minute close-up of Someone’s snout pulsating to a continuous loop of Pink Floyd’s “Us And Them.” 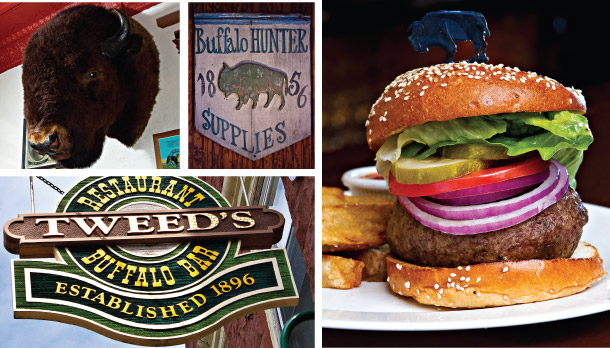 Companionship of a taxidermy bison head musketed by Theodore Roosevelt is difficult for most psychosomatic systems to comprehend. But not Edwin Tuccio, proprietor of Tweed’s Restaurant & Buffalo Bar within John J. Sullivan Hotel.

As owner of the aforementioned domelike piece, mounted adjacent to Tweed’s four-draft bar (centerpieced by a fishing rod formerly owned by Ernest Hemingway), Tuccio has enabled his bison noggin and me to cultivate a two-member fraternity of bestfriendforeverhood that transcends Abbott and Costello, Kramden and Norton, and Ren and Stimpy.*

We discuss and summarize episodes of former ABC sitcom Perfect Strangers and its influence on current foreign policy.

As owner of 300+ bison at North Quarter Farm in Riverhead, Tuccio also serves variants of sustainable bison product at Tweed’s, including cabbage soup, hanger steak, bone-in ribeye, filet and burger. The domical-shaped, earth-flavored latter, which possesses fewer calories, saturated fat and cholesterol than 90% lean beef, has formed a bestfriendforeverhood with my tummy.

*Tuccio’s bison head, whom I have named Stewart, is always returned to Tweed’s before its 8:00pm curfew. I am a perfect gentleman. 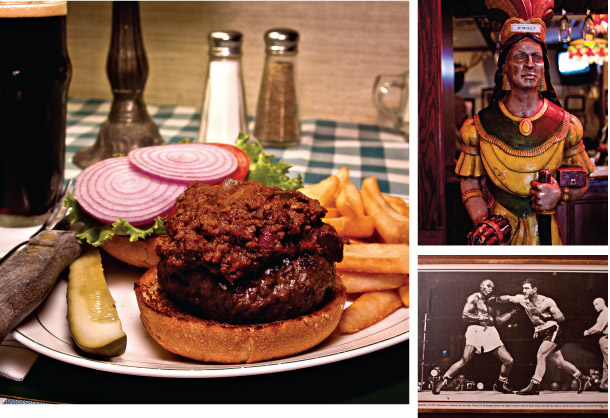 Despite 24-Hour Explorative Burger-Based Exploration’s spontaneous impetus, and prior to the entry of the previous four Long Island-created burgers into mouth, our narrative’s climax was evident: Travel to Southold and participate in an extraterrestrial abduction by ingesting O’Mally’s Alien Burger.

As an enthusiast of space gore cinema (e.g., Killer Klowns From Outer Space, Inseminoid and Jason X), every proper exploration should conclude with an alien encounter. Unfortunately, upon my arrival to O’Mally’s, Phil Mannino’s Eastern Long Island staple (opened “sometime in the 1970s,” says Mannino—prior locations have existed in Amagansett, East Hampton, Riverhead, Sag Harbor and Southampton), I am informed of Alien Burger’s actual composition.

“Imposters must be extinguished,” I reply. Opaque sunglasses conceal my death stare. “I accept your challenge to grapple with an extraterrestrial meat-creature.”

Author’s Note: Due to this entry’s graphic dénouement, which includes terrorism via cyborg cutlery and an Alien Burger disembowelment, our conclusion has been modified. An accessible alternative, Western Chili Burger, will replace Alien Burger. We apologize for any inconvenience.