When it comes to this artist’s work, you won’t get it if you are trying to “look.” everything is about seeing. she is guiding you to a place, one that is the manifestation of her peace (more on that in a minute), and it’s up to the viewer to see for himself what that is. though formally trained, the technique imparts a childlike execution. the figures are beyond whimsical to the point of naïveté, but obvious from the composition, the choices of color and the overall Surrealist rendering, there is considerable thought and sophistication at play.

the first layer is the process itself. “drawing isn’t about anything so much as it is about seeing.” a scene, a person, a moment…whatever the subject may be, this artist goes beyond “looking” and sees the value of interpreting its mark on her personal narrative. the characters on her panels are brought to life with animal-like faces—horse-like in fact. because the horse’s eyes can see with such perspective and the mouth is far away. “the eyes have to do all the talking. the mouth doesn’t matter. it’s just the eyes.” and then, with simple accuracy, she exorcizes her demons in the form of human-like monsters.

“a lot of my work is about my pain.” (but there is peace there too, anncharlotte.) her profession as art therapist is self applied; a 9/11 series illuminates this in particular. her front row seat to the horror is exemplified: she was downtown when the planes hit, walked home to brooklyn and bore witness to the strange aftermath the next day. spirited fish swimming around the fish bowl of manhattan reflect the randomness of the masses beforehand. flowers swaying in a field is a metaphor for the masses of people mesmerized by the planes hitting the towers. and the stampede of buffalo as the towers crashed reflect the faces indelibly marked on her memory of fleeing the grisly scene.

still, the artist’s pursuits are less narrative. “to me, the more successful ones are the less obvious.” and like the intense whimsy of the venetian harlequin patterns of black and white checkers mixing with colorful stripes, anncharlotte is reaching for an aesthetic that has its own sense of humor, and sense of purpose. “i’m interested in reformatting art (for people). sometimes if you enjoy the process the product doesn’t matter.”
don’t be fooled, there’s much more than that for sure. 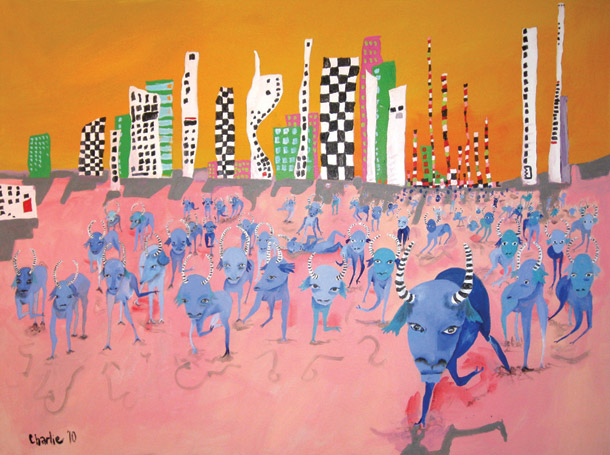