Laughing is very important to me,” says the artist whose work will (mostly) make you laugh. actually, whether or not the viewer laughs is more an indication of how seriously that person is taking himself as opposed to the seriousness of the artwork. after all, it is ok for art to be sarcastic. and, in the best tradition of Dadaists, gina gilmour’s paintings are as sarcastic as a stick in the eye.

pieced together out of “dream fragments,” her compositions are not exactly composed, but instead fit together like refractions of a prism. “it’s very intuitive, the way an image evolves. they come up out of personal history…[but] it becomes more iconic.” and once the process can be accepted at face value, the paintings are immediately familiar and eerily comforting. sheep float through panels to convey a sense of innocence, tenderness and frailty, sometimes even ignorance. cleverly, they are not heavy or filled in, but thinly outlined figures so the very image looks how it feels (dreamy, ethereal).

it is the same, more or less, with other figures. birds or humans, gilmour’s characters are masked in anonymity. man? woman? it’s ultimately irrelevant compared to the way the space and colors are laid to rhyme. “references in general come from a specific thing, but move into a more abstract or universal sort of thing. the painting comes into a life [the painter’s] but then has to live on its own. they become metaphors.”

nevertheless, some panels do tell a story, perhaps in the way you remember a story—the details shifting and fuzzing into one another with each attempt to embrace it. in the end, all that matters is the sense of the memory. thus, the artist puts elements together to cue an impression without spoon feeding.

“there’s a compulsion to tell a story when you’re having a big feeling. but then the viewer has to be able to relate to it without knowing the story.”

“repetition of forms makes your mind jump. it helps tie things together and also illuminate one another…makes a wholeness.” 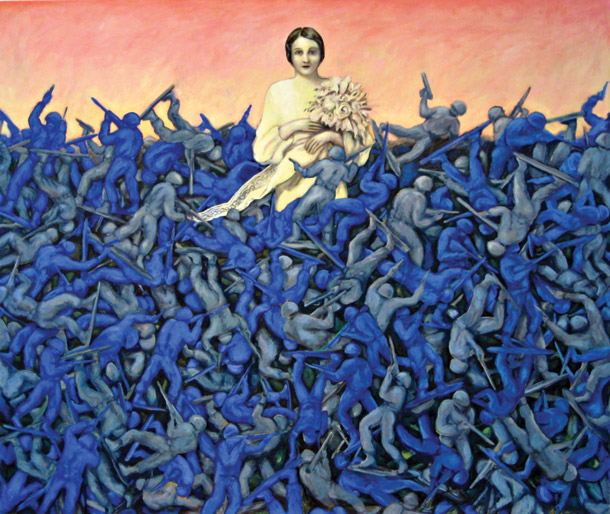